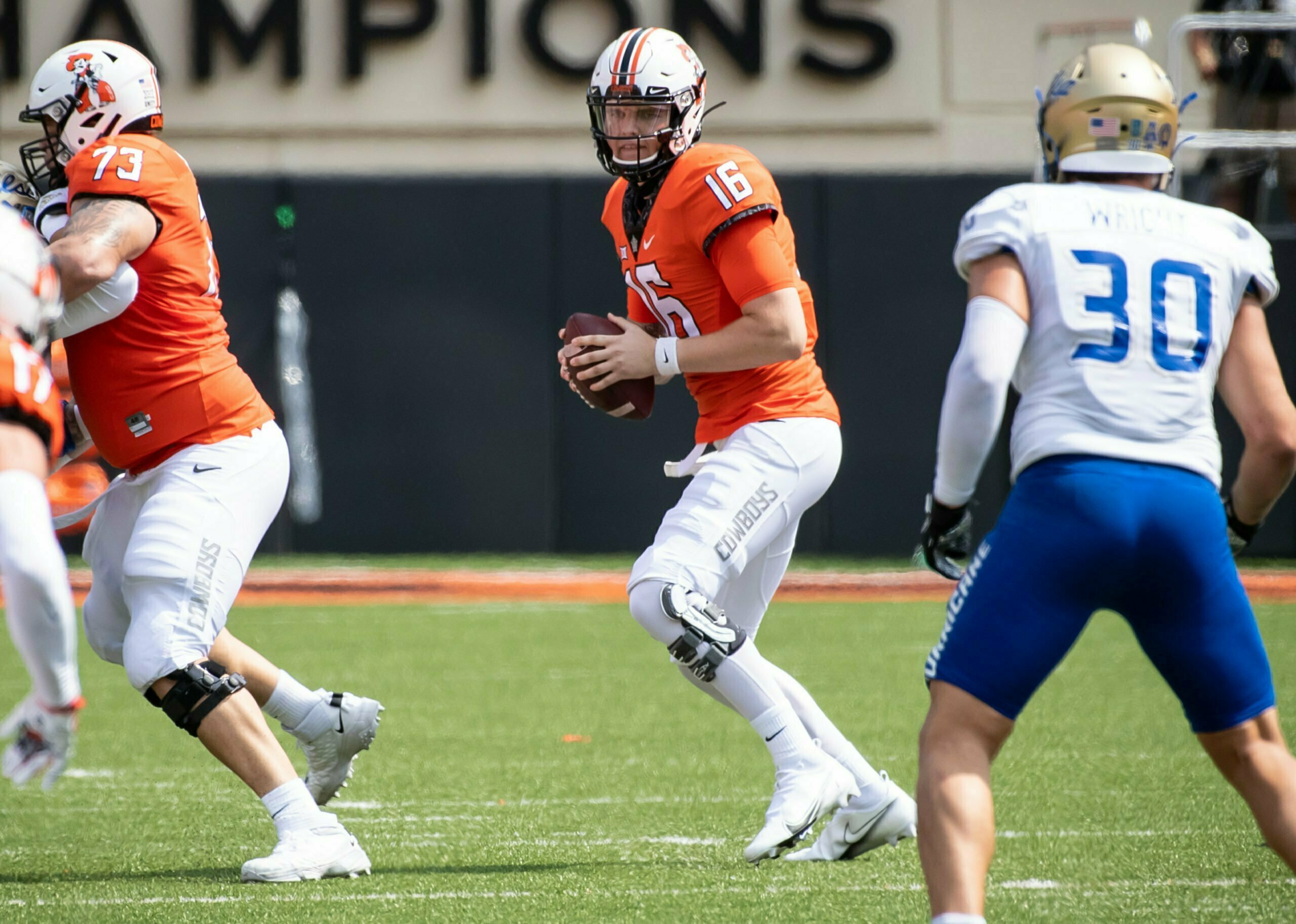 Of all the plans most of us had for Oklahoma State’s 2020 season, none of them included Spencer Sanders being injured on the first possession of the Cowboys’ first game. Just imagine how first-year offensive coordinator Kasey Dunn feels.

“You lose your quarterback essentially in the first series of the game, in the first game of the year and everybody’s going ‘Holy crap, what the hell happened?'” Dunn recounted after the Cowboys’ 16-7 win over Tulsa.

Sanders was walking gingerly after OSU’s opening drive that resulted in a made field goal. He returned for a second possession after having his ankle wrapped, according to the ESPN TV crew, but his next play would be his last. A poor handoff exchange between he and Chuba Hubbard resulted in a fumble, and Sanders hobbled off the field and back to the locker room.

Next up, junior college transfer Ethan Bullock, a player most OSU fans were unfamiliar with but who shared an “OR” with true freshman QB Shane Illingworth. Gundy went with the elder Bullock as he normally does in such matters. Bullock went 8-for-13 for 41 yards. He looked like someone who never expected to be playing that early in the game, and OSU’s struggling offensive line didn’t help those optics. Bullock’s eight drives ended in five punts, a turnover on downs, halftime and an interception. OSU achieved a total of two first downs.

After Bullock’s pick, Mike Gundy found his team down 7-3 to Tulsa with the third quarter dwindling. He decided to pull the trigger on the former four-star gunslinger.

Being a quarterback is by no means easy, but fundamentally the idea is simple: get the ball, quickly, to one of your plethora of star playmakers and let them make plays.

Illingworth quickly showed the ability to do just that.

On Illingworth’s first possession he went 3-for-3 for 73 yards, and the Cowboys marched straight down the field in six plays. That drive ended with Chuba Hubbard picking up the Cowboys’ only TD of the day and taking the go-ahead lead they would keep.

While it’s easy to eyeroll at Bullock coming off the bench before the rookie, it’s a little easier to swallow based on some background Gundy gave after the game.

Mike Gundy said Shane Illingworth missed a lot of time due to contact tracing and didn’t have many recent reps going into the day. Kasey Dunn joked that he “vanished” for a few weeks.

Gundy on postgame radio: “There was some debate about whether to even have Illingworth suit up today because he had not practiced in basically 14-15 days because of contact tracing.”

But Dunn had no qualms about handing the ball to his true freshman.

“I mean he was really, really good all the way up until we didn’t have him for a couple weeks, so I had no issues with him going in,” said Dunn. “He’s a great pocket passer. He’s very, very poised as I mentioned earlier. He’s a great kid, a student of the game. He’s gonna be a heck of a player but, sure, losing Spencer is rattling. No question about that.”

According to Tylan Wallace, Illingworth looked anything but green when his number was called.

“Once they told him he was in, he had just the utmost confidence,” said Wallace. “He didn’t look like a normal freshman.

“You know, you tell them, ‘OK, look now you’re playing’ and they kind of have that scared look in their eyes. But he came in and just had the most confidence in himself. He believed in everybody. He believe in all of us. … He believed in himself and all of us and just went out and executed.”

“Those two guys stepped in and did a hell of a job, and hats off to Shane,” Dunn said. “He stepped in in a moment that we needed a couple plays. He found the right couple of guys, got them the football, got protection settled up and did a nice job of standing in the pocket.

“I’m excited where we’re headed with that young guy, and hopefully [we’ll] get Spencer back soon.”

With Sanders’ status up in the air, it’s will be interesting how reps are divided heading into a quick turnaround against West Virginia next Saturday. But it would be hard to imagine any scenario where Illingworth hasn’t earned the sole QB2 spot at best on next week’s depth chart.