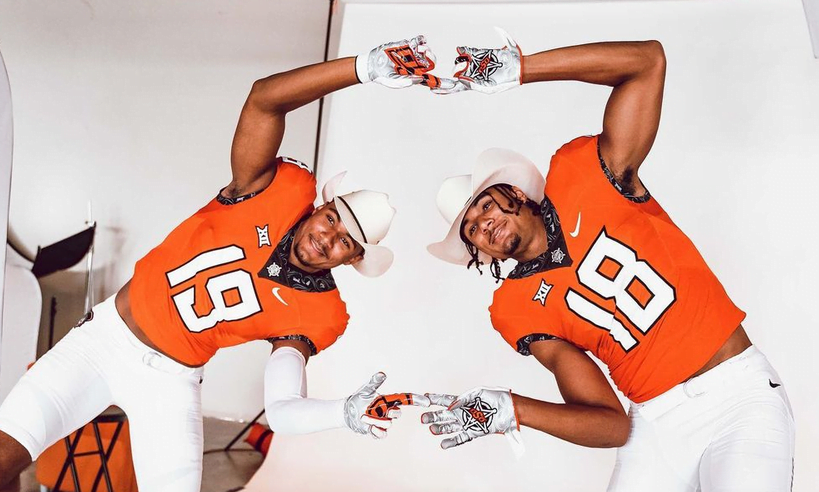 Oklahoma State freshmen wide receivers Bryson and Blaine Green are generating some buzz in fall camp, and after enrolling early in the spring, the two have positioned themselves for roles as newbies in 2021.

So before they go nuclear on the scorching hot turf at Boone Pickens Stadium this fall, here’s six fast facts to know about the two budding stars.

One both the twins accomplished.

2. They have another brother. There was thought during the twins’ recruitment that perhaps landing at Minnesota would be an option. That belief was based, at least partially, around their older brother, Seth, who played there from 2018-20 and rushed 114 times for 388 yards. Seth was also an Allen product who rated as a three-star prospect in high school playing quarterback. He’s set to finish his career with Houston after transferring there this spring.

3. Minnesota roots. Another belief that the Green twins might choose Minnesota out of high school stemmed partially from their Minnesota roots, too. People thought the Greens would choose Minnesota because, well, the Greens always chose Minnesota. Their dad, Bryan, played college football there as a running back. Their older brother Seth, too. And when Bryan got married, he married Teresa — and you guessed it: She’s from Minnesota. Here’s a must-read column from The Oklahoman‘s Jenni Carlson breaking all that down last December.

Their dad, Bryan, played college ball there — he was a running back for the Gophers in the early 1990s — and after he and Teresa married, they settled in the Twin Cities area. She was from Minnesota, and because he was in the medical services corps of the United States Army National Guard, they wanted her to be around a support system when he was deployed.

Bryan and Teresa Green also loved the opportunities for their sons there. Starting with the oldest, Seth, then adding the twins, they played just about every sport available. Football. Basketball. Lacrosse. Baseball.

4. The Green twins trained behind enemy lines. When Bryson and Blaine began training and sharpening their skills as they got older (this nugget again within Carlson’s column), they found a man named Travis Wilson. Wilson played at OU from 2002-05 where he caught 105 passes for 1,315 yards and 17 touchdowns. Only once did he record a stat against OSU in that span — in 2004 when he returned two kicks for a combined 22 yards.

5. Inseparable. Much like the Wallace twins — Tylan and Tracin — it seems Bryson and Blaine Green are totally inseparable. They told Spectrum Local News last year that staying together during college was always the plan.

“Every offer we got and every interest we got was together,” Blaine said.

Also like the Wallace twins: The Greens plan to be bunk buddies once again.

So for another four years, they’ll be teammates and naturally roommates too, so it’s a good thing they’ve had experience with both.

“We used to share a room. Up until freshman year when we got a new house. Other than that, we’ve been in the same room. Not bunk beds. Just twin beds next to each other,” said Bryson Green.

6. QB1 has taken notice. As a former Texas high school standout himself, it didn’t take long for Spencer Sanders, OSU’s QB1, to take notice of the twin talents in Bryson and Blaine.

“They’re big — both of them are big,” Sanders said in July. “Nowadays, it’s not about being big and all that stuff, but it’s good to have it, especially for outside protection, outside blocking. The outside big ball, like, ‘I’m going to go get it. I’m going to out tough you.’”

Sanders noticed in particular that both Bryson and Blaine are “sharp on their routes, responsibilities, IQ.”