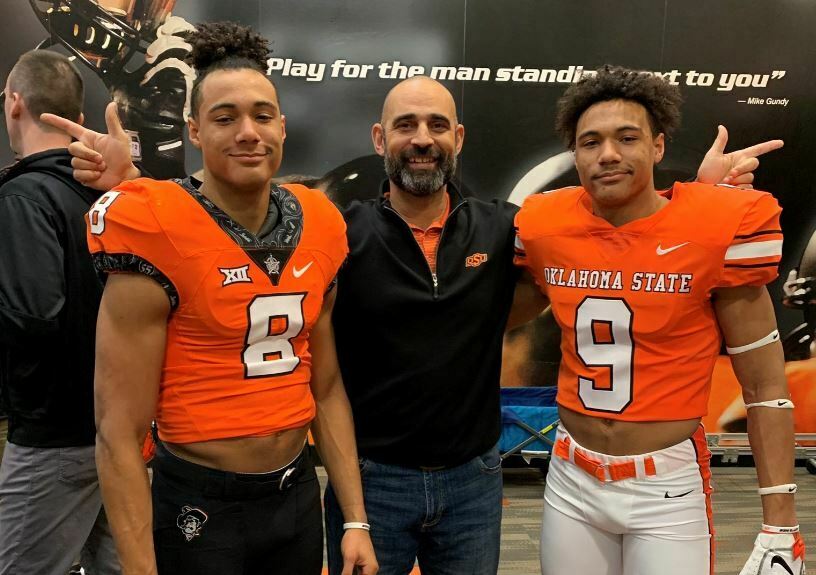 The Cowboys lost their top three leaders in receptions from last season, but Kasey Dunn has done a superb job of keeping talent flowing in.

Tylan Wallace, Dillon Stoner and Landon Wolf combined for 125 of Oklahoma State’s 207 receptions in 2020. Tay Martin is expected to fill in for Wallace. Braydon Johnson is expected to move into the slot this season and team up with Brennan Presley to fill in for Stoner and Wolf. That leaves a spot open at the Pokes’ other outside receiver, one that could end up being a true freshman.

OSU quarterback Spencer Sanders pointed to Blaine and Bryson Green as Cowboys who could get a good number of snaps in their true freshman seasons. The Green twins will likely compete with the Rashod Owens, Langston Anderson, Jonathan Shepherd and Matt Polk for snaps.

The Green twins enter as heralded recruits in the Cowboys’ 2021 class and both enrolled early.

“They’re big — both of them are big,” Sanders said. “Nowadays, it’s not about being big and all that stuff, but it’s good to have it, especially for outside protection, outside blocking. The outside big ball, like, ‘I’m going to go get it. I’m going to out tough you.'”

Bryson was narrowly the more highly regarded recruit between the two. He was the No. 391 player in their class, while Blaine was No. 447. However, their stat lines at Allen High School were nearly identical. Here is what that looked like through sophomore, junior and senior seasons.

Sanders said the twins also have the mindset to go with the talent. Sanders said he would sometimes be walking into the film room and see the twins walking out. With all the depth Dunn has accumulated, it’s been a while since a true freshman had a dominant role as an outside receiver, but 2021 could be the year.