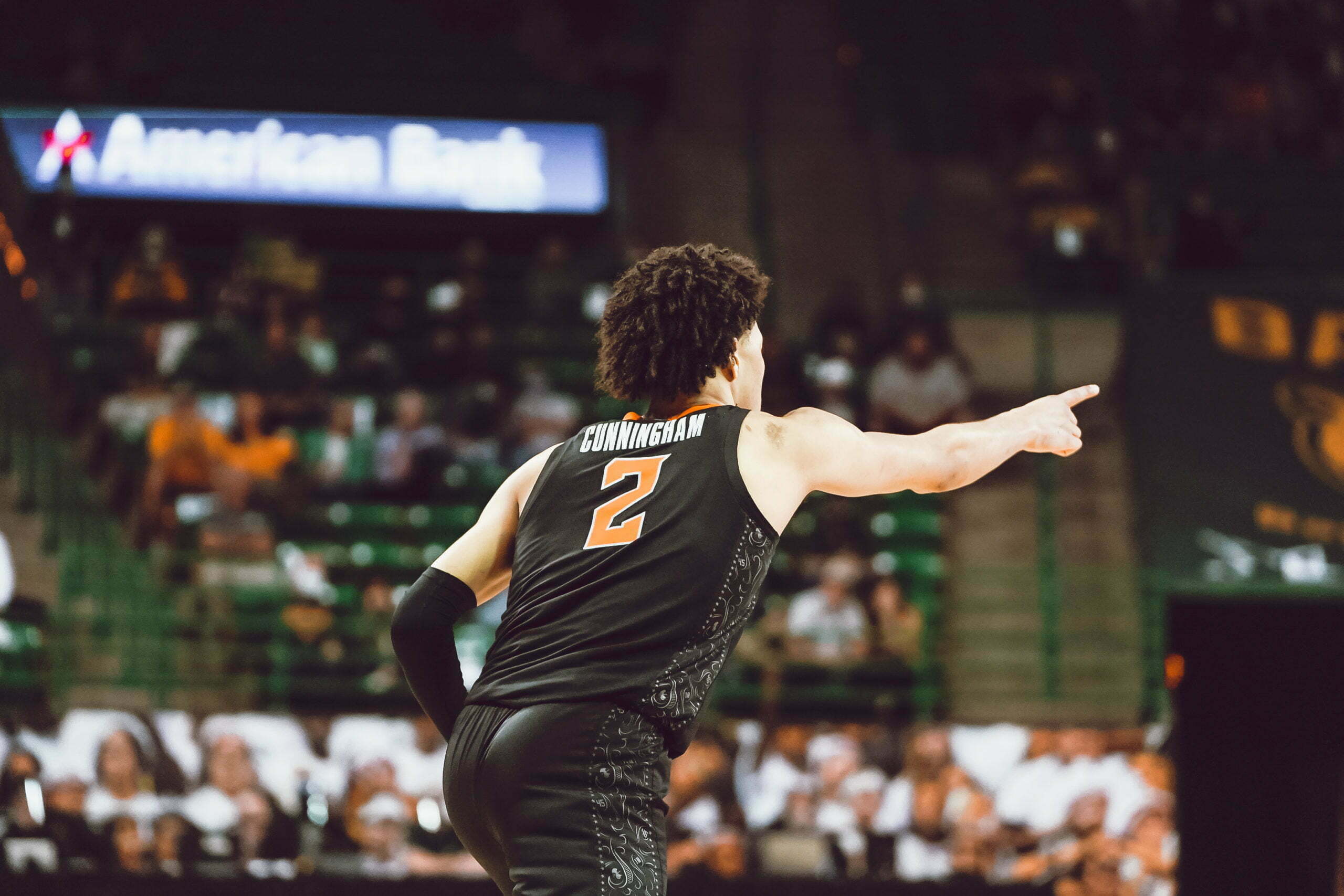 Oklahoma State’s regular season finale is upon us. Here are six thoughts and questions surrounding the Cowboys’ final road trip to Morgantown.

The No. 1 question on everyone’s mind concerns No. 2’s late exit in Waco. Just how serious was that rolled ankle? Because it couldn’t have come at a more serious time for the Cowboys.

It came out Friday morning that Cunningham sprained the ankle and was still being evaluated.

After the game, Mike Boynton said he didn’t see “anything unusual” with the injury happening a few feet from him. Teammate Avery Anderson, who has tweaked his own ankle a couple of times recently, seemed bullish on Cade’s ability to bounce back.

Excuse us, Avery, as we all fervently knock on the closest piece of wood.

Whether or not Cade is 100 percent after a short turnaround Saturday, the Cowboys could sure benefit from their junior PG’s return.

When WVU came to town in January, Isaac Likekele pitched in 22 points and grabbed seven rebounds. The Cowboys came up just short 87-84. But Ice’s most significant contribution to the series was his first trip to Morgantown when he led the Cowboys to a huge win, scoring 23 and grabbing nine boards.

Likekele has missed five games this season, first to a foot injury and then to a hand injury following his return back on Feb. 22 against Texas Tech.

After the Baylor game, Boynton said Likekele is “better,” but that he would be reevaluated Saturday to see if he is able to go against the Mountaineers.

3. It’s Been an Absolute Gauntlet

The Big 12 is known as a murderer’s row annually thanks to its top-to-bottom talent and depth, but this year — with COVID postponements and a constantly changing schedule — several teams have had a tough row to hoe, and maybe none more than OSU.

The Cowboys end their regular season on Saturday afternoon in Morgantown, in what will represent their fifth-straight matchup with a Top 20 team with three of those in the Top 7.

So far OSU is 4-1 in that stretch. Ending the season with a gauntlet like that and coming out 4-2 is nothing to sneeze at, but a road win in M-Town would be all the more impressive.

The Cowboys will stand in the way of career win No. 900 for West Virginia’s Bob Huggins on Saturday. Including his three seasons among the Division-II ranks, Huggins is 899-378, having a head coaching job every year since 1980.

That’s an impressive stretch and landing on 900 on Senior Day would be one heck of a bonus for Huggins, his players and the Mountaineer faithful. Hopefully, the Cowboys won’t oblige.

The Cowboys currently sit at 10-7 in Big 12 play for a win percentage of .588, or the highest the Cowboys have finished in nearly a decade. With a win on Saturday, the Cowboys’ .611 would be the second-highest conference record OSU has posted since Eddie Sutton’s penultimate season in 2004-05 (11-5 and .688).

6. Cowboys Holding onto a 4 Seed

The road loss to Baylor didn’t ding the Cowboys, at least in the eyes of NCAA aficionados. ESPN’s Joe Lunardi updated his Bracketology projections late on Thursday night, and the Pokes are still tabbed as a No. 4 seed. CBS’ Jerry Palm also kept the Pokes at a No. 4.

There’s a lot of balls still bouncing in the air — and conference tournaments yet to play out — but you have to feel good about the Cowboys at a 4-5 seed even with a loss in Morgantown. If the Pokes can split these final two and end with a win, I think they are a solid 4.