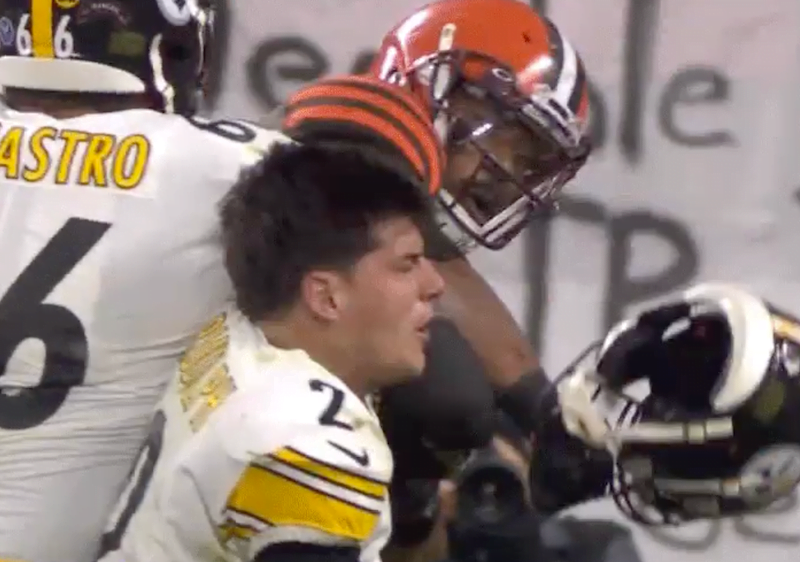 So … in case you missed it, Mason Rudolph got assaulted with his own helmet on Thursday evening in a 21-7 loss to the Browns.

In the waning seconds of the game, Myles Garrett absolutely lost his mind, ripped Rudolph’s helmet off his head and attacked him with it. Literally swung it at him and hit him atop the dome!

It was unbelievable and brazen and one of the most bizarre endings to a football game ever. Garrett is going to get suspended, and this will go down as one of the handful of most-talked about events of the NFL season.

Everybody who was watching of course had a take on the situation, and most of them sat somewhere between “completely outraged” and “borderline catatonic.”

Here’s a sampling of what folks who cover, play and talk about football were saying in the wake of the Garrett-Rudolph incident on Thursday night.

Respect Baker Mayfield when everybody else is like "nooooo comment" just saying straight up "yep that's inexcusable and he's getting suspended."

He’s gotta go! There’s no place in our game for that. Absolutely ridiculous. @nfl

He’s done for the rest of the year

Tonight is a perfect example of why @Twitter is an impossible platform. There are lots of people saying "Mason Rudolph started this" when Myles Garrett ripped his helmet off and smashed him over the head with it.

Baker Mayfield hasn’t handled everything perfectly this season. But he was very good in that live interview with Erin. He ducked nothing and said the right things. https://t.co/rZuAj8CEaV

The Browns organization should be absolutely embarrassed. Just gross.

Oh my God. Big night out in Waco, now just seeing the #BrownsVsSteelers mayhem. A life watching football. I have never seen… holy shit, Myles Garrett.. what punishment is proper for hitting an unprotected head w/swinging helmet? I can’t even… wow. (Huge win for Browns marred)

-Rudolph is really lucky the helmet opening hit hit him, not the outside/crown.
-I'd go to war with Pouncey. He wanted Garrett's blood.

Bro i can’t even believe that just happen.

If I ever am in a position to hire a security team. I'm DM'ing Maurkice Pouncey & Kendrick Perkins with lucrative offers. Those two are as ride or die as it gets.

The 2019 Browns were a heavy favorite to be involved in the first “D-lineman hitting a QB with his own helmet” brawl.

Mason Rudolph got drilled in the brain with a helmet and immediately asked to speak to the manager https://t.co/LhxWmjOHA6

Listen people. If he had caught Mason Rudolph the right way, he could have killed him or hurt him very very badly. F that. This is serious.

If @MylesLGarrett plays in the #NFL again this year then we have a bigger issue than the garbage he displayed tonight!! Never seen anything like that!!