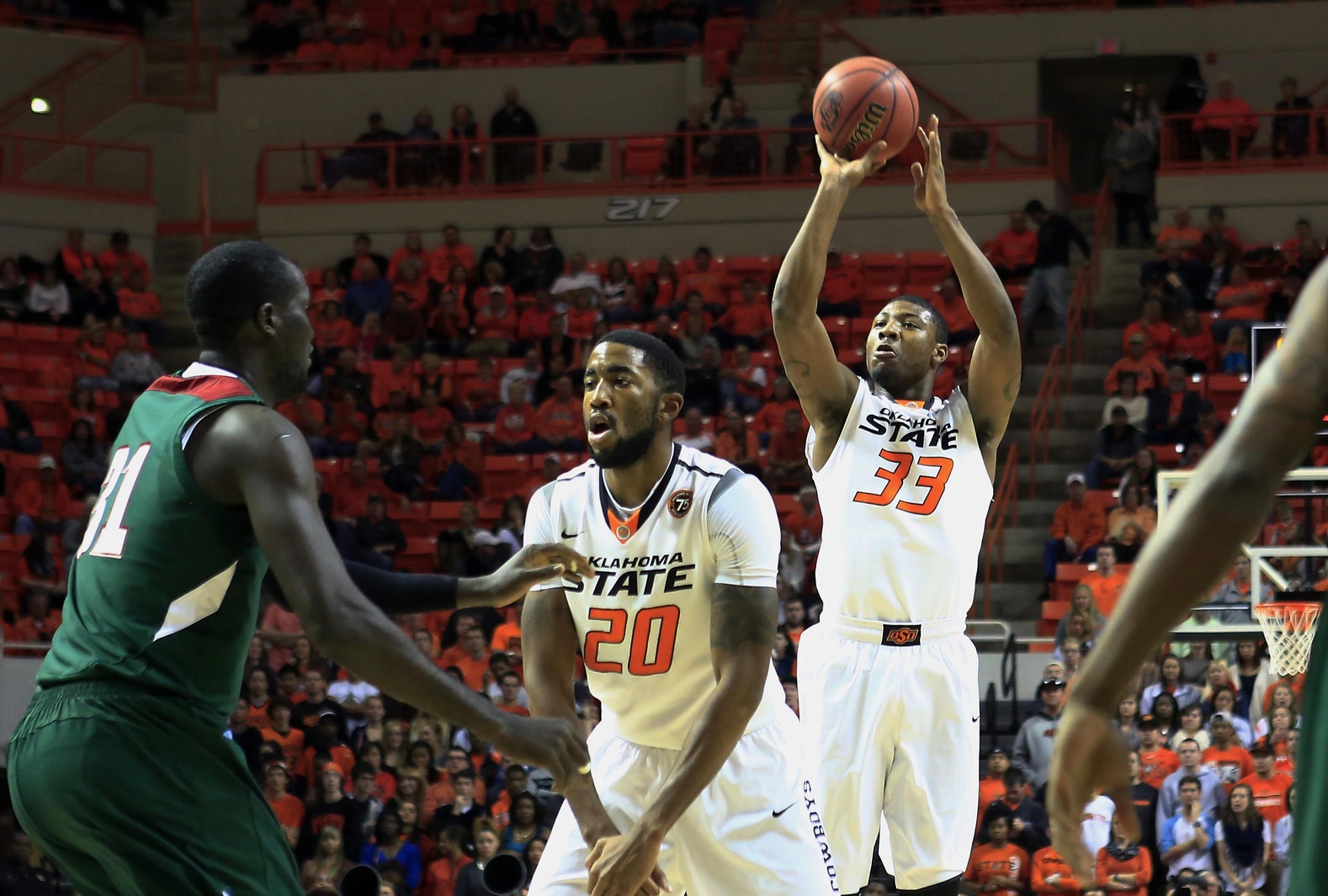 I went to the OSU-MVSU (I refuse to type out Mississippi Valley State University, call me lazy, I don’t care) game on Friday night in GIA and while we’re dealing with glorified exhibition games here, I still have a few thoughts about the Oklahoma State rout.

• I listened to the pregame on the way over from Tulsa and I heard Travis Ford say he told his team to just go back to playing the way they used to before the rule changes.

1. Markel’s 17-footer off a screen
2. A flea flicker to anyone
3. Everything else

For somebody who couldn’t shoot just 500ish days ago, Markel sure does look smooth coming off picks and knocking down long jumpers or threes. His elevation makes it look like it’s easy for him. I love it.

• The improvement of the new scoreboard can’t be overstated. I started out the game sitting up near the rafters and watching instant replays felt like I was sitting in my living room. OSU uses the top part correctly, too. Stats and ads. You pay the bills, I get what I want.

• Stevie Clark has some JamesOn in him. JO was a super-underrated passer (Clark had eight assists tonight) and a really good shooter. Clark is built differently but his passing skills are so refined already. Carson called him Cheyne Gadsen crossed with Randy Rutherford!

• How about it taking Le’Bryan until the first game of his junior year to record a collegiate double-double? That’s pretty nutty, right? I know OSU was playing MVSU but he’s so, so good when he plays tight around the rim.

Heck, even if he wants to shoot that little baby fadeaway from eight feet, I’m ok with that. Just none of this 18-foot one-foot fade and three-point stuff. That’s ridiculous for somebody built like him.

• Travis Ford must be reading PFB. I saw at least four different half to 3/4-court trap defenses on Friday night. OSU is deep enough to make it happen this season.

• Let me set the table for you at the end of the game. OSU is whitewashing MVSU with Mason Cox, Marek Soucek, Ford Stuen, Alex Budke, and Jackson Perez. For some godforsaken reason Mason received the ball north of the low block while facing the basket on OSU’s end of the court.

He took one step and saw a cutting Soucek , whom he fed for a dunk. One problem: In his head he wanted the pass to be a no-look pass so after throwing it and watching Soucek take a step with the ball he turned around and started heading the other way as if he was trying to look off a safety. He tried to no-look a pass that he had just watched nearly to completion.

He, of course, punctuated all of this with a gangly fist pump and a giggle. I love our walk ons.

• Speaking of the scoreboard — OSU has all these new little promo videos to get the crowd jazzed up (I know, Coach Iba is rolling over) and everything.

The best one is one of a smiling, semi-hunched-over Markel saying “what time is it?” while glancing at his wrist (which doesn’t have a watch on it). Kamari is in the background photobombing and Markel doesn’t even care.

• There were 79 free throws in this game. 79! I thought MVSU was going to have to send a grad assistant to the Hampton Inn at halftime to drag some KU guys over to finish the game!

I don’t mind the curve of players getting used to fouls on the perimeter but please let them play on the inside. I saw calls tonight that would have equated to 6-hour mid-90s Bedlam games with walk-ons trying to close things out. That concerns me more than the ticky-tack stuff away from the bucket.

• Speaking of fouls, Marcus Smart is going to have a lot of them this year. And he’s going to take himself out of a big game unless he figured out how to adapt quickly to the new rules. That’s going to be an interesting storyline.

• I swear I saw Christien Sager nearly dunk tonight. Like an honest-to-God smash on a fast break. It wasn’t completed, but STILL!

• Why do we continue to have 29 student managers on or around the bench? And how is it that among the 29 of them I saw at least four different shades of orange polos?

• I’m a big Hammonds fan already. He and Gaskins give OSU a depth dimension it hasn’t had in years. You don’t need it in March but you might need it to get you to where you want to be in March, if that makes sense.

Let’s just say, we won’t open conference game previews wondering if Mason will be getting run like we legitimately have in the past.

• Le’Bryan has somehow mastered the art of dunking on people while 12 inches off the ground.

• Speaking of Le’Bryan — I was listening to his postgame interview with John Holcomb and I realized how badly I want him to be successful this season. There’s a lot of innocence there — you can tell by the way he talks. Smart is a man — he treats you like a man and is treated as such. There’s still a lot of boy left in Nash (that’s not a bad thing either).

It seems like Nash just kind of wants to be good at basketball and have a quiet life and that’s pretty much it.

Yet he’s being psychoanalyzed at every turn. That can’t be easy for anyone, much less a 21-year-old kid.

• Not sure if this is correct but I think the new sideline and three-point lines are orange. Didn’t they used to be black?

• As I was leaving the arena tonight I noticed the old side scoreboard said MVSU: 63 OSU: 17. Clearly triple-digit games were not how Coach Iba intended it.

So it is, though, and OSU’s Final Four march is underway.