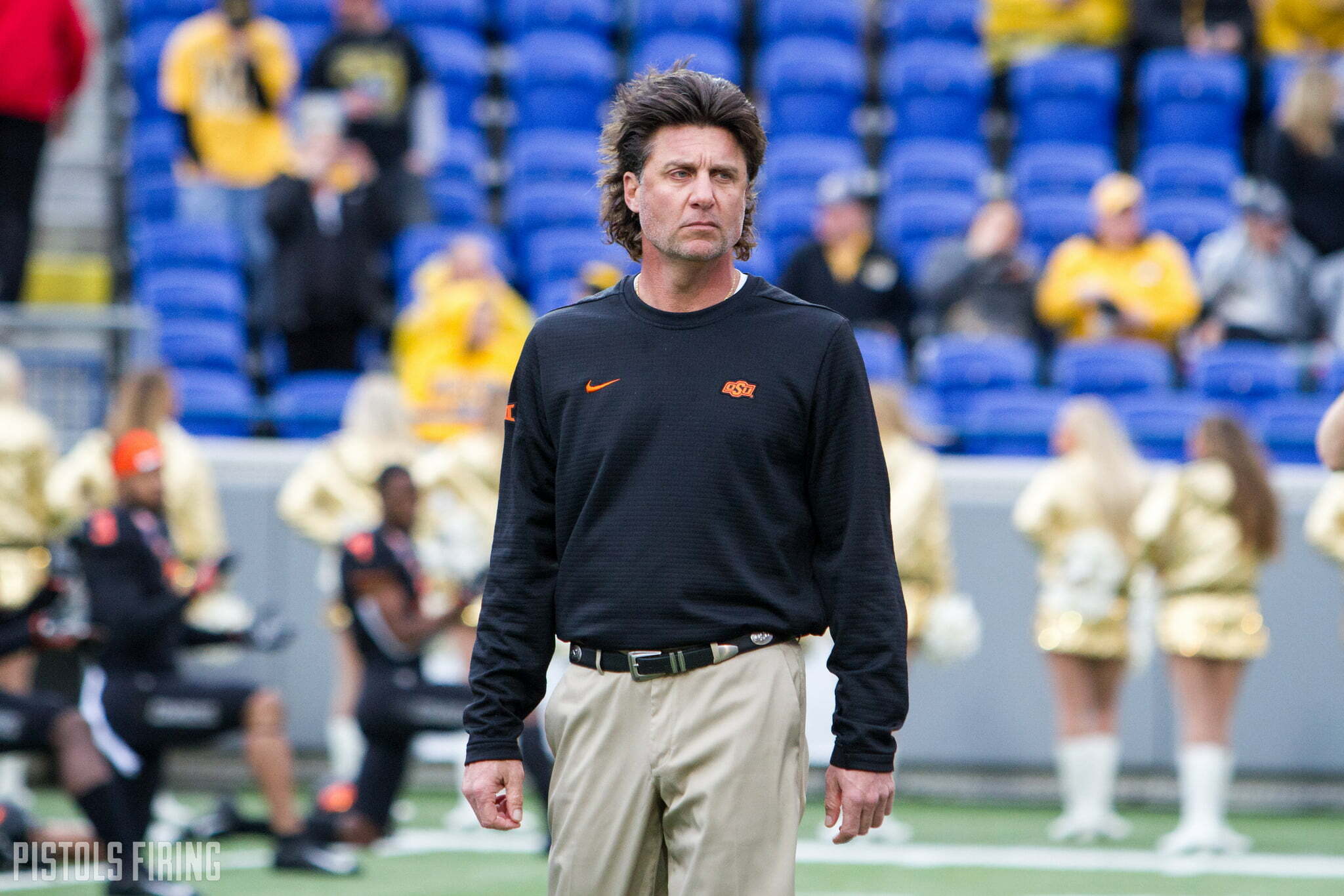 The news that Todd Monken will be coordinating an OU quarterback and not an OSU one in 2019 was likely a double gut punch for Oklahoma State head coach Mike Gundy on Sunday evening.

According to one source, Monken and Gundy spoke on the phone Sunday after Monken took the Browns gig. The implication was that there had at least been some preliminary chatter about what Monken coming back to Stillwater would look like and that Monken wanted to personally deliver the Browns news to Gundy before Gundy’s kids told him what Adam Schefter was tweeting.

This is at least part of the reason there hasn’t been much news out of Stillwater regarding the position. Gundy was waiting for Monken to make the rounds for NFL interviews before finalizing anything.

It might seem like a weird move for Monken to have gone from the OC job in Stillwater in 2011-12 to being a head coach at Southern Miss and then into then NFL only to double back to Stillwater eight years later, but a source told us that Monken’s son could be enrolling at Oklahoma State in the fall, which is another piece of the puzzle. NFL jobs were also getting grabbed by the handful daily, which could have played into a potential return.

It might be even more confusing that Gundy, who has commented pretty openly that he likes obscure talent that he can keep, would want somebody with Monken’s profile back in Stillwater. “Obscure” does not describe someone who was one of 32 NFL offensive coordinators in 2018, but Monken and Gundy are old friends and have vacationed together. If there’s something Gundy values more than continuity stemming from obscurity, it’s trust.

“Even beyond football, our personalities and likes and dislikes are similar,” Monken said back in 2011. “Beyond even the business part of it, we enjoy each other’s company. We have become good friends.”

“I don’t really have very many friends and don’t communicate with a lot of people, but Todd is one of them,” Gundy added at that time. “We met through football, but our friendship is not only about football.”

Monken led a 2012 OSU offense with a merry-go-round at QB to a preposterous 3.01 points per drive (11th in the country) as that Pokes team labored to an 8-5 record and Heart of Dallas Bowl win over Purdue.

Regardless, that dream has died in Cleveland, and now OSU must turn to its other choices. From what I’ve heard from a variety of people there is a strong sense that a new OC will now come from inside the organization rather than outside of it.

One source told me that Kasey Dunn and Josh Henson are both on the short-short list (no surprise there) and that Gundy is trying to do a balancing act to keep everyone happy and the entire ship running smoothly.

As an outsider looking in, this makes sense. Dunn has been in Stillwater a lot longer than Henson and has had wild success within his role as wide receivers coach, but Henson is likely generally more qualified given that he’s actually been an offensive coordinator before.

Henson was the OC for Missouri from 2013-15 and led a top-20 offense in Year 1 before it went south in a hurry. After that he returned to OSU as an offensive analyst and then became the offensive line coach in 2017.

With Henson (or Dunn), Gundy would have continuity and trust. And while neither is as sexy of a name as Monken, it might not matter for these Pokes. Both are great, dedicated recruiters and both know the rhythms of a top-25 offense as well as anyone.

When I suggested to another source that they should just have co-offensive coordinators, my source paused and laughed, insinuating that too many cooks in the kitchen (or more specifically too many of these cooks in the kitchen) might not be the best thing for Oklahoma State’s offense.

If one of those two gets the position, one source noted to me that Bodie Reeder returning to coach QBs is on the table. As Kyle Boone previously reported, Reeder has not been offered a job yet, but that doesn’t mean he won’t be in the future. Monken was the first domino that needed to fall (or not fall).

So that’s what we know as of today. Obviously all of this can change by the hour, by the day and none of it is set in stone. One thing became clear as I dug into this — and this should come as no surprise to people who have been following along and watched Gundy hire somebody he allegedly Googled six years ago — nobody close to the situation seemed 100 percent sure of how it was all going to go down.

One source close to Gundy said he doesn’t know what the head man is going to do, which button he’s going to press. “I just know Gundy does things so random, he’s normally just spur (of the moment),” said another.