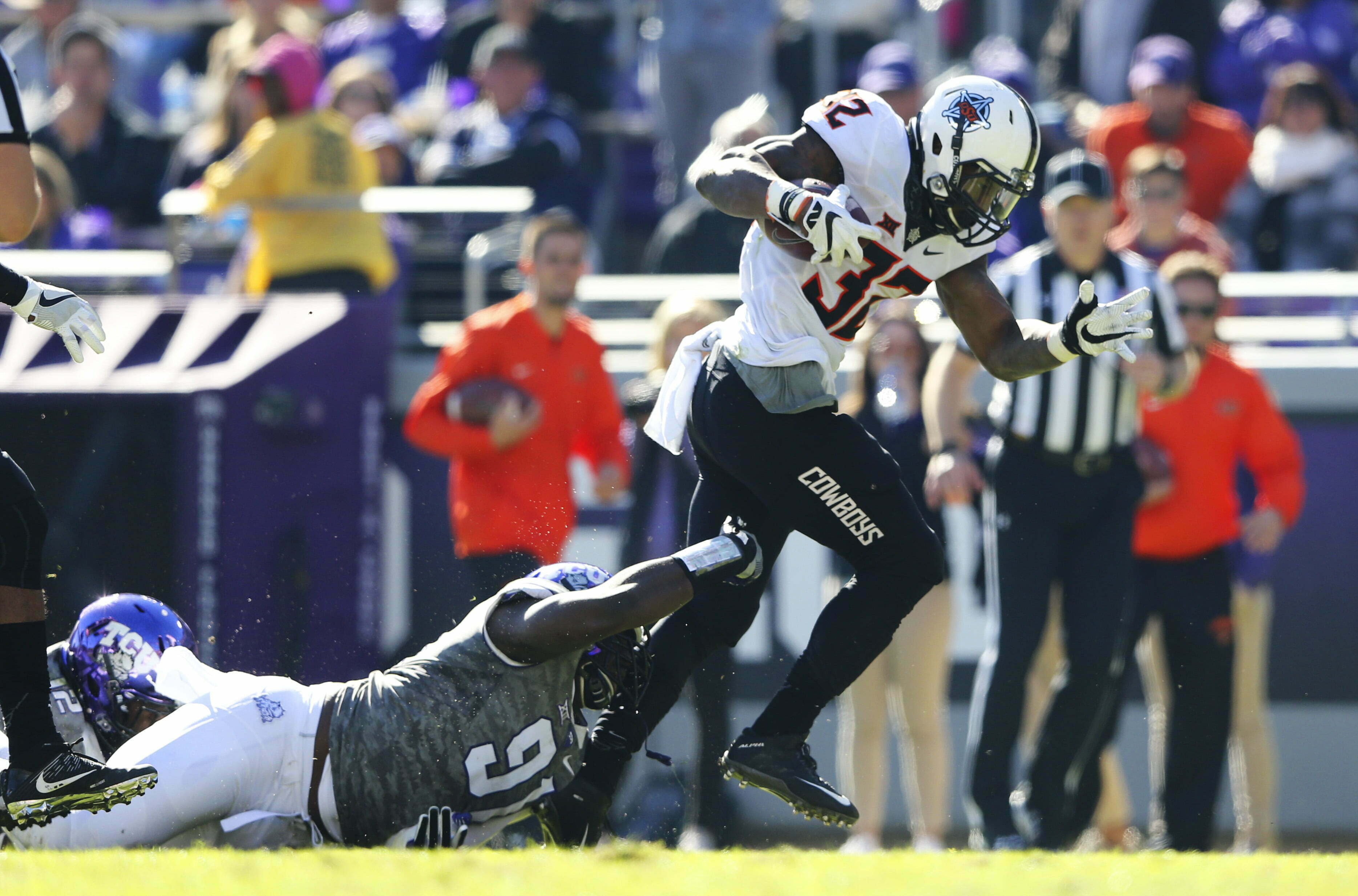 Admittedly, my system for grading uniforms from last year was a little off in its inaugural season. For example, I graded OSU’s Week 1 uniform combo much lower than it should have been because I wanted to leave room for improvement rather than saying everything was 100 percent amazing all the time. Honestly, I love just about every uniform combination that the equipment staff puts together, so it can be difficult to grade them accurately with such high scrutiny. What’s not to like besides “tiny Pete” on an orange helmet?

With that being said, here are my top five uniform combinations from last season. 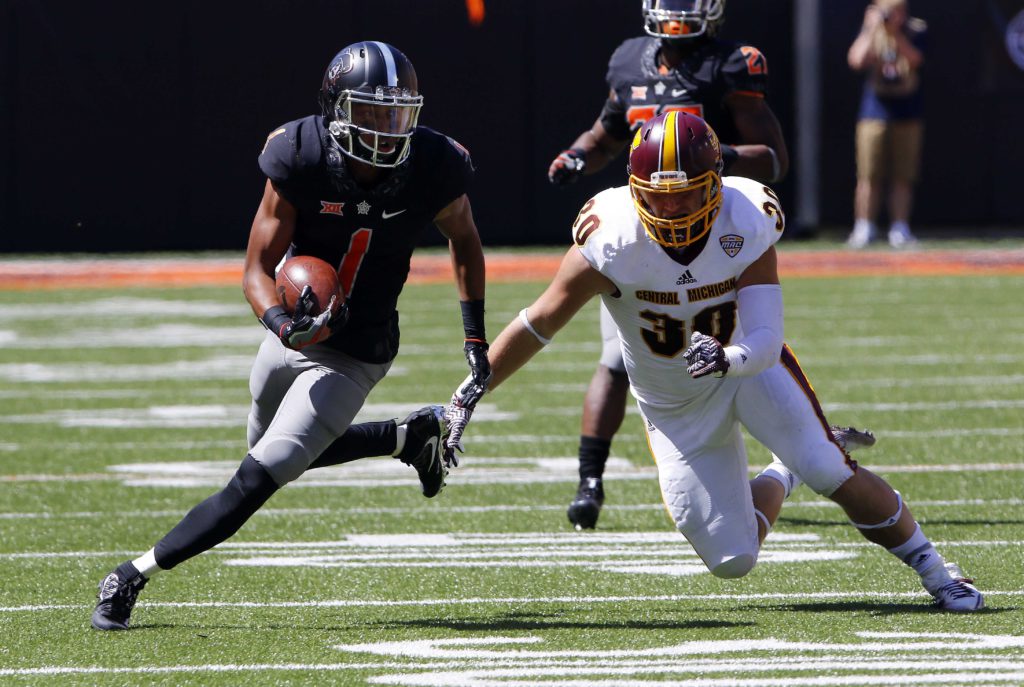 Although OSU won this game against a team that probably drank Michael’s Secret Stuff, I thought this uniform combo was incredible.

The chrome stripe and chrome facemask was added to the Phantom Pete helmet last season and was featured in a home game against TCU. It looked awesome in that game, but I think it looks even better with the new threads.

I love the idea of wearing gray with Phantom Pete at home. The gray pants look the best with the black jersey, so I was glad to see the gray make an appearance rather than rolling out another all-black combo. It looked even better with the gray socks, which I believe was a first for the Pokes. Some of the players even wore cleats with chrome spikes for some added flash. 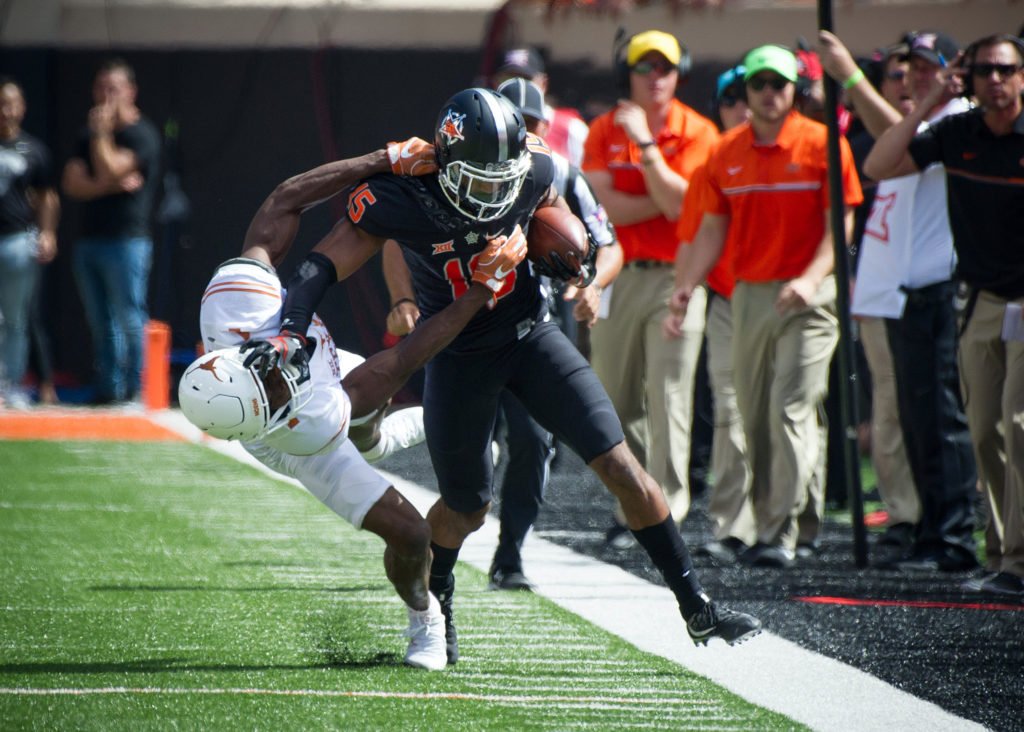 Football is a game of inches, and this concept arguably flows into comparing/rating uniforms. Why would this all-black combo rate so much higher in comparison to the all-black with the Barbed Wire helmet? You’ll notice there isn’t a combo with Barbed Wire that made my top five, but I’m not going to knock that helmet at all. I especially like the Barbed Wire helmet when paired with the black facemask, but it’s just a little too busy overall.

The Black Badge helmet worn against Texas is about as flashy as a helmet needs to be. It’s one of the sharpest helmets in OSU’s arsenal, but it was surprisingly only worn once compared to Chrome Pete and Barbed Wire, each worn three times.

The other factors that pushed this combo up on the list were the badge logo on the palms of the gloves as well as the reflective outlines of the numbers, which could be seen in the tunnel before the Cowboys took the field. 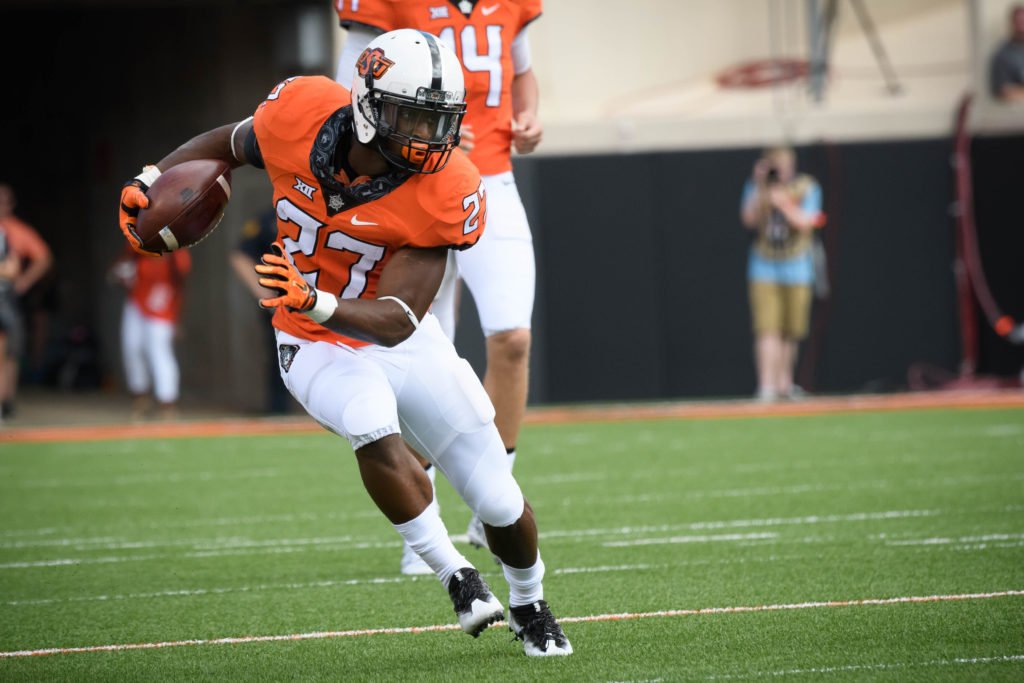 White – Orange – White used to be the home combo. I understand when others say it can look too plain at times. However, with the addition of a new badge helmet and a new brand helmet, W/O/W is a combo I look forward to seeing now. The combo does not look as basic as it did in the past since OSU has added black accents in the jersey and the helmets.

This classic combo is the foundation of Oklahoma State’s uniforms, and it got the upgrade it really needed to give it that WOW factor (pun intended). I’ve noticed that other schools like Oregon and TCU receive praise when they wear their home version of white helmets and white pants combos. Just because it was a classic look for the Cowboys doesn’t mean it should be overlooked. It’s so much better than what Penn State and Nebraska are putting out.

As far as ranking this combo over its counterpart with the badge, I just think the brand is a more powerful image for the Cowboys. The amount of orange in the helmet balances out the uniform combo particularly well as a whole. The badge is growing on me, though. I have a combo utilizing the badge helmet ahead of this particular combo, but if I had to choose between badge or brand, I’ll ride with the brand. 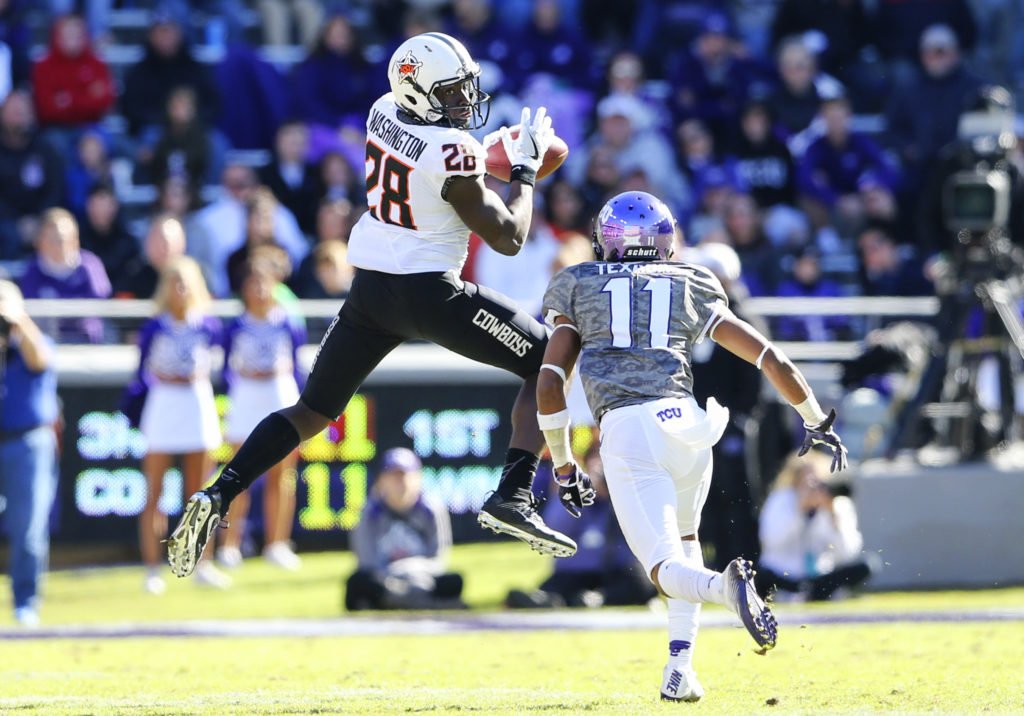 I don’t know if this will end up as my overall favorite road combo for the new threads, but it is my favorite one so far. If the Pokes are not rocking a monochrome look, I am a big fan of matching the pants to the number color of the jersey. They did exactly that in more than half of the games this past season.

This combo got the nod over the road looks against Kansas State, OU, and Washington because the White Badge helmet worked better with the white jersey and black pants than did the Orange Chrome or Barbed Wire helmets. The White Badge helmet has a perfect balance of white, black, and orange in relation to the rest of the combination. 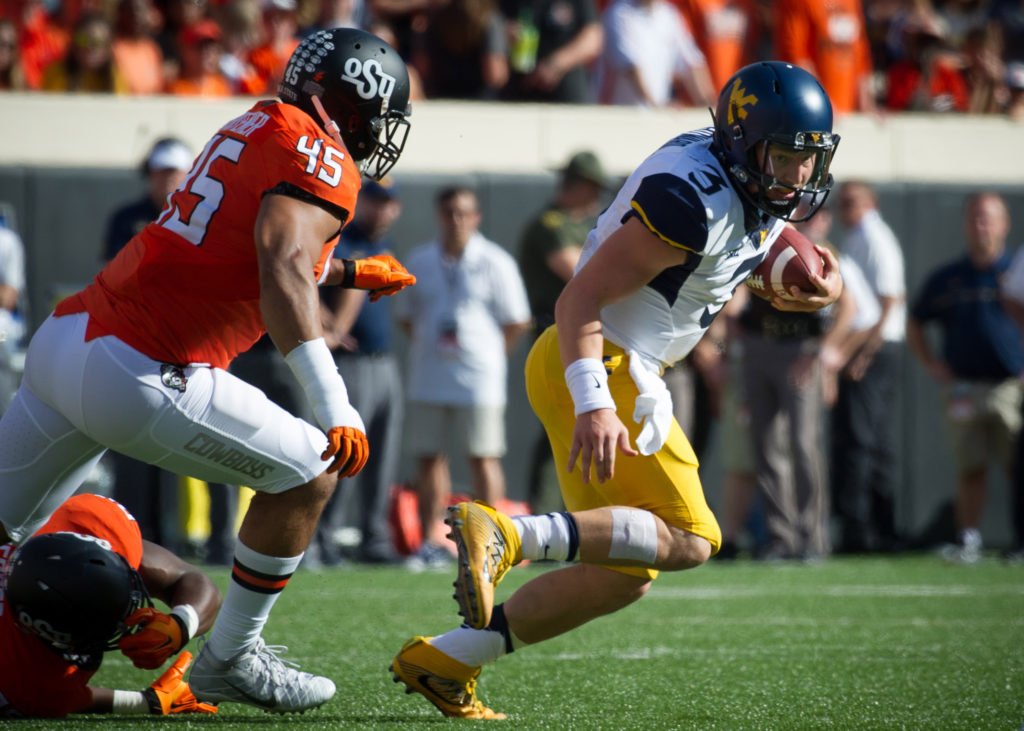 If you’ve been a reader of the blog for a couple of years now, you know my deep appreciation for the throwback socks. I would listen to a podcast dedicated to talking about these socks if such a thing existed.

Hats off to the equipment staff for finding a throwback helmet that works extremely well with these modern uniforms. I think this helmet works especially well with the new threads because the jerseys have the black accents in the collar and sleeves that are needed to tie everything together, whereas it might not have looked as good in previous years. This look was so good that the tri-color combo haters had to admit that it was elite.

The helmet had some amazing details including a white chinstrap to complement the white brand logo, the throwback “OKLA. STATE” across the back bumper, and the football decals. Even though the helmet lacked the orange power that fans love, it was arguably the most powerful helmet the Cowboys have worn because of the tribute to the lives lost in plane crashes and the Homecoming crash from 2015.

I love that the throwback helmet is becoming an annual tradition for homecoming games. Even though we haven’t seen a complete throwback uniform, we have gotten to see some great concepts combining old and new. It would be amazing to see a throwback helmet for a road game or two just to get a little more use out of them.