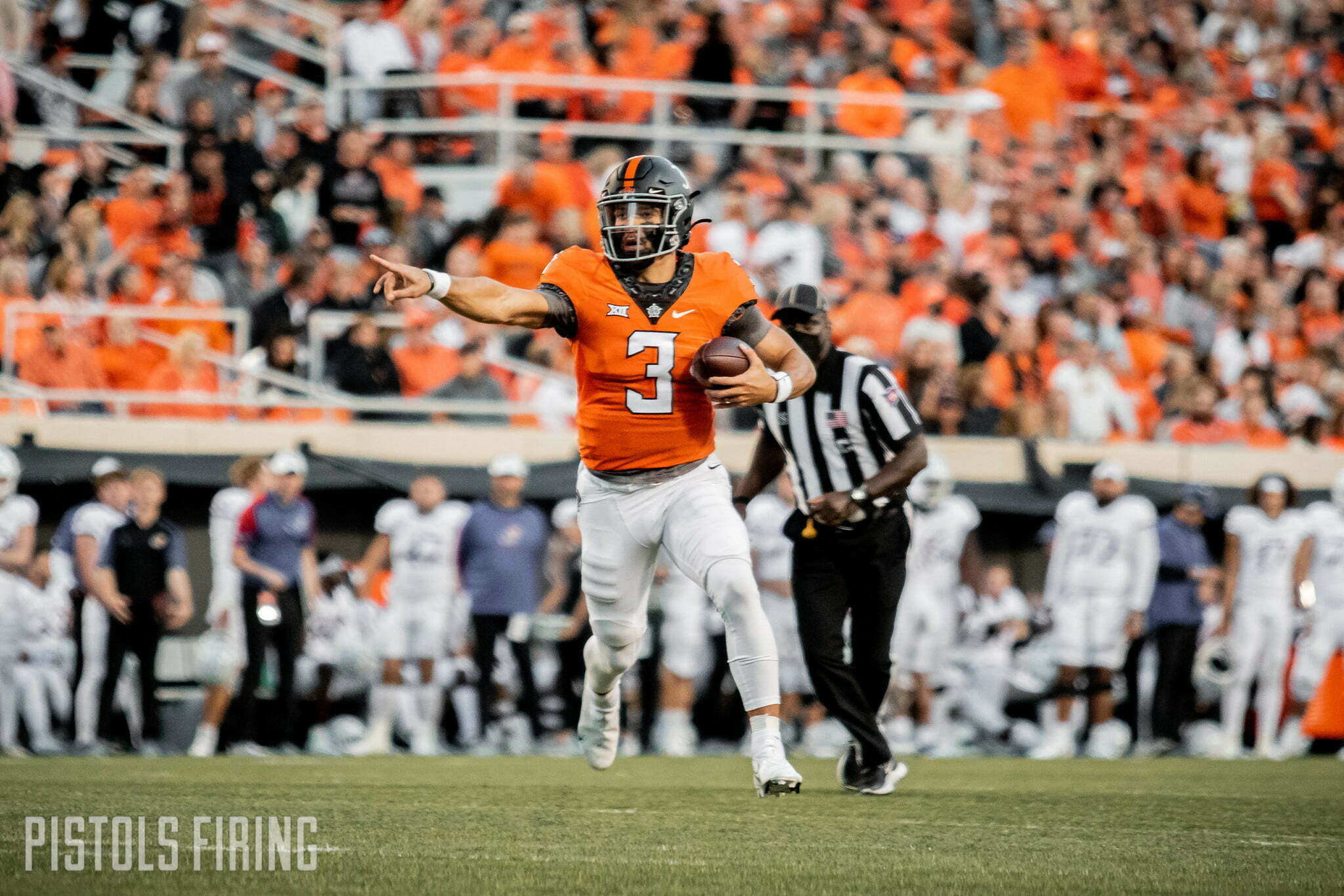 It appears as if the Spencer Sanders era at Oklahoma State has come to an end.

Sanders, Oklahoma State’s starting quarterback for the past four seasons, is entering the transfer portal, he announced Monday on social media. Sanders threw for 9,553 yards, 67 touchdowns and 40 interceptions in 43 games with the Cowboys. He also ran for 1,956 yards and another 18 scores.

Sanders finishes his OSU career second in program history in passing yards and yards of total offense. He also finishes third in passing touchdowns and first in passes intercepted.

“It’s with a very heavy hear that I am announcing my decision to enter the transfer portal today, and in the spirit of the ‘Cowboy Culture’, I wanted everyone to hear it directly from me,” Sanders wrote. “I appreciate all that Cowboy fans and the Oklahoma State family have given to my family and me in these memory-filled five years. The relationships, education and endless support are something that will stay with me forever. I hope that everyone will respect this massive decision and support me in my next chapter of live.”

Out of Denton, Texas, Sanders was the No. 171 player in the 2018 recruiting class, making him the No. 17 player in the state of Texas. He chose Oklahoma State over offers from Texas A&M, Ole Miss, Penn State, North Carolina and others.

After redshirting behind Taylor Cornelius in 2018, Sanders took over the starting role in 2019 after a fall camp position battle with Dru Brown. Sanders missed two games that season with injury, but still had 2,065 passing yards, 628 rushing yards and was responsible for 18 total touchdowns.

He again missed time because of injury as a redshirt sophomore in 2020. Playing in nine games, Sanders threw for 2,007 yards, ran for 269 yards and was responsible for 16 scores.

The Cowboys’ Fiesta Bowl-winning 2021 season was Sanders’ only year in Stillwater he didn’t miss time from injury (though he did miss a game because of COVID protocol). Leading the Cowboys to the Big 12 title game and a Fiesta Bowl win over Notre Dame, Sanders threw for 2,839 yards and 20 touchdowns while rushing for another 668 yards and six scores.

The injury bug again bit Sanders in 2022. He played in 10 games and got off to a roaring start before nagging injuries plagued him (and OSU) down the stretch. Sanders’ senior season finished with 2,642 passing yards, 391 rushing yards and 25 total touchdowns.

With Sanders out next season, Oklahoma State’s quarterback room becomes interesting. Garret Rangel, who will be a redshirt freshman in 2023, started two games in Sanders’ absence in the 2022 regular season and could be on pace to start OSU’s Guaranteed Rate Bowl against Wisconsin. Then there is Gunnar Gundy, son of OSU coach Mike Gundy. Gunnar also had a start in 2022 and finished the regular season with 247 passing yards, three touchdowns and four interceptions.

OSU also has a highly touted quarterback recruit committed in Zane Flores. Listed at 6-foot-4, 190 pounds, Flores led Gretna (Nebraska) to a state final, throwing for 3,117 yards and 31 touchdowns in his final high school season. Flores is the No. 459 player in the 2023 class.