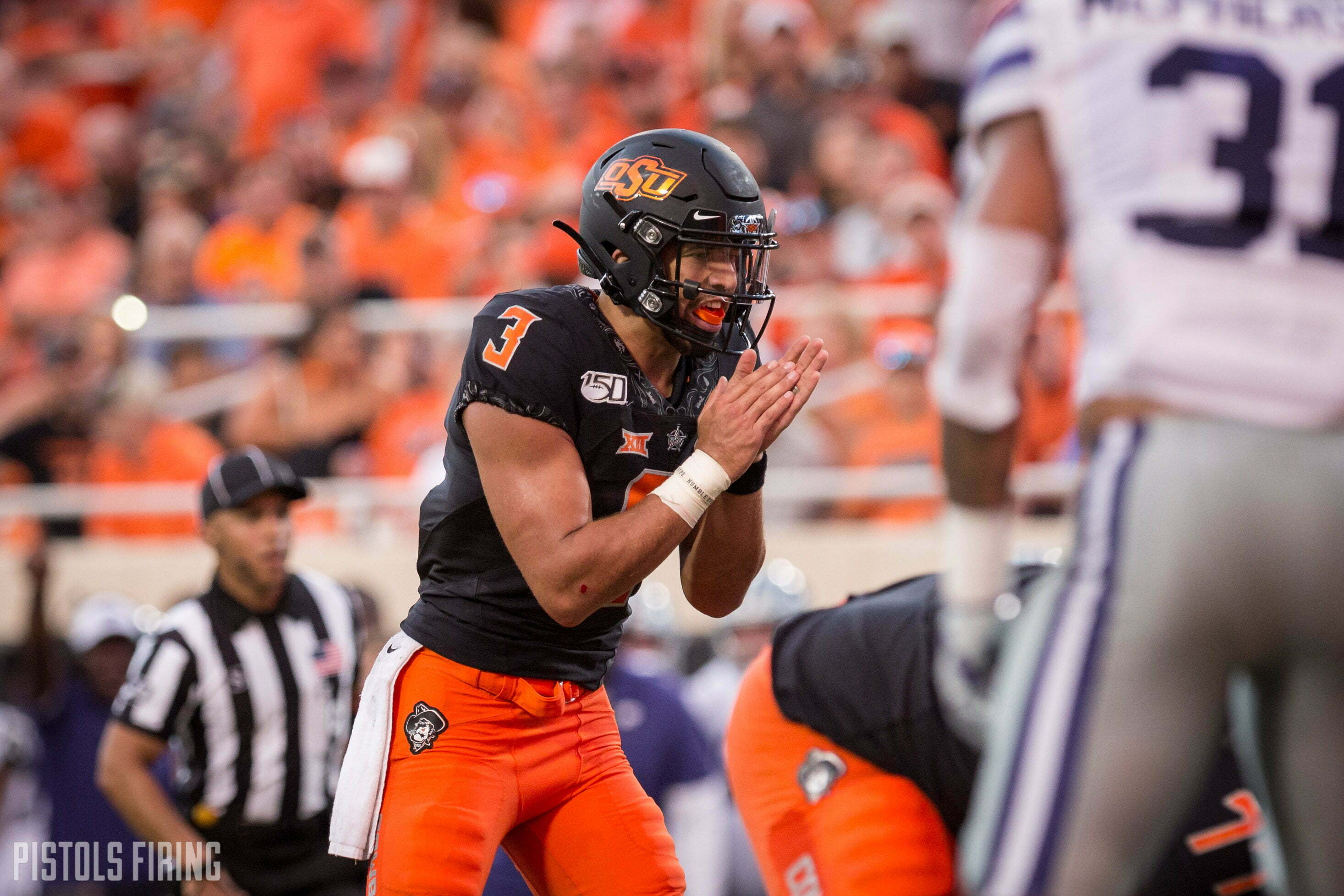 In his fifth game as Oklahoma State’s starting quarterback, Sanders turned in career lows in passing yards (153), completion rate (64 percent) and passer rating (112.6) while throwing the second and third interceptions of his young career.

To qualify, was without both starting tackles due to injury. The Cowboys offensive line was shuffled around with only one lineman, left guard Marcus Keyes, starting at his normal position. OSU averaged giving up one sack per game coming in, Sanders was sacked twice and sent running for his play’s life on several other occasions.

According to the freshman QB, the “W” was the most important stat of the night.

“It’s a great confidence booster,” Sanders said after the win. “We have a lot of great guys making a lot of great plays. We’re just going to keep going and keep working. We’re not going to care about anything outside of football. We’re going to take care of each other and do our thing.”

One of those great guys was a great running back in the making (made) in Chuba Hubbard who covered up a lot of OSU’s offensive inefficiencies by breaking loose on big, chunk yardage plays.

The nation’s leading rusher just added to his lead with an historic 296 yards including runs of 20, 44, 53 and 84 yards to provide instant offense for the Pokes. (I wonder if Mike Gundy ever nudges Spencer and says anything to the effect of “Now you know what I went through with Barry.”)

Sanders knows he’ll need to improve if OSU is to reach its ceiling in 2019, and moving forward, and against more explosive offenses still remaining on its schedule.

“As everybody knows, I probably didn’t play to my top best,” said Sanders. “Having [Chuba Hubbard] do what he did today really helps me and picks me up. I’m happy we won. I have to get back in the film room and I have to keep getting better every day.”

His first interception came on a play in which he was trying to make something out of nothing. It’s a noble endeavor, but one that a more experienced QB probably throws away or picks up a couple yards and slides when it’s second down when his team’s up 20.

“We made some mistakes we need to clean up,” Mike Gundy said after the game. “Spencer needs to do a little bit better job of when he’s scrambling, to just take off and run rather than throwing across his body.

“He’s making adjustments. Overall, very good win for us against a very physical team. Enjoy this one tonight and back to work tomorrow.”

That’s the point isn’t it? OSU came out with the win thanks to a big time outing by its defense and an even bigger display by it stud running back. Spencer continues to improve and add experience with some help from his team. That’s a luxury that OSU’s last franchise QB didn’t enjoy at the start of his career. I’m excited to see how much further that might take its next one.