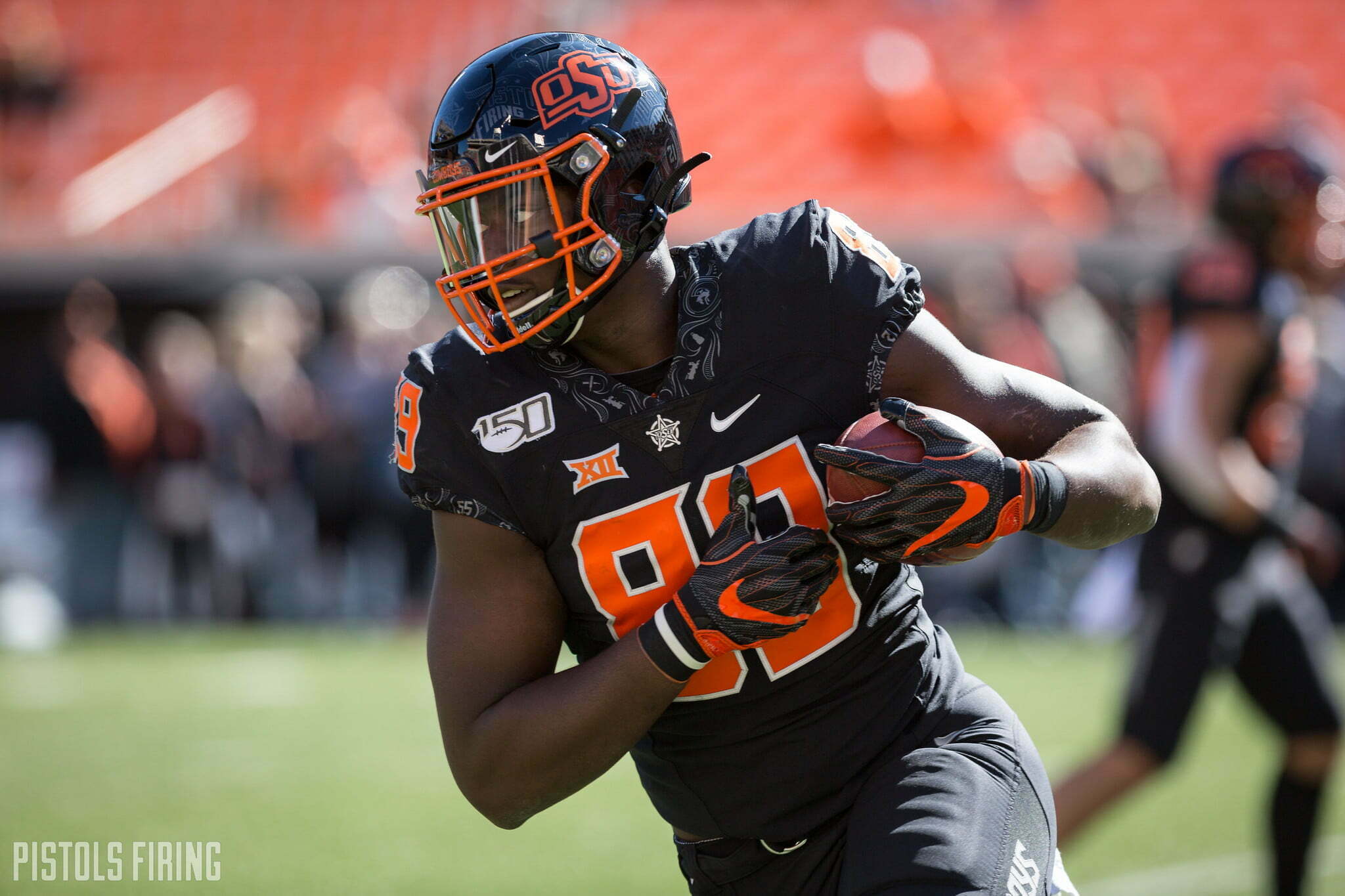 Oklahoma State’s namesake position — cowboy back — has a terrific returning group this spring that will provide (even more) weapons for QB Spencer Sanders to utilize when the real games start in September. Let’s look at where the position stands on the precipice of spring football and what to expect as we head into the season.

I felt convinced this time last year that Jelani Woods would be a 25-catch, 400-yard guy in 2019. He found his feel for the game the year before and had a QB who would look for safety valves often. And yet … his first catch didn’t come until the Big 12 started and his first TD wasn’t until November. He was, it seemed, underused for somebody with that kind of body and that set of skills.

His most prolific game last year came against Baylor when he had five catches for 32 yards in what was — at least for the first half — a tight one with an eventual NY6 team. It stands to reason that OSU, which definitely wants to run the ball, could (and would) find ways to implement a 6-foot-7, 265-pound tight end like this. It’s not like you’re going four verts on every play and there’s no spot for Jelani. Quite the contrary, he can be used both as a blocker and as a decoy blocker just as effectively.

I don’t know how much of that is Sanders reading routs and how much is on the offensive coordinator or gameplan — maybe nobody does — but I’m intrigued to see what Kasey Dunn says about how he’s going to fit Jelani into this 2020 offense and what kind of role he sees him playing.

Even with Grayson Boomer exiting stage right, there are few concerns about OSU’s depth at cowboy back, at least for this season. Metcalf and Carter are good No. 2 guys behind (or alongside) Woods, and OSU is situated perfectly at this position.

The Boomer replacement is Quinton Stewart, who enrolled early and should participate in spring ball and the spring game. He’s a 6-foot-4, 230-pound guy from Salina, Kansas that some are quite high on.

“I think he’s gonna be a tough guy. You have to be a tough guy to play cowboy back here. It’s not for everybody. And he’s a tough guy, and he’s squared away in his life, and he knows what he wants to do. And so I’m excited about him getting here.”

26 — That’s how many games Jelani has left for OSU. How is this possible? How does he have two seasons left when it feels like he’s been here longer than Dillon Stoner?

The depth chart should look similar to what it did at the end of last year. Jelani and Carter as your starters (if two cowboy backs start) with Metcalf backing them up. The question is not whether this combination will be effective — we’ve already seen that that’s the case. The question is more what they will be effective doing. Blocking, catching, carrying Chuba on and off the field. Hopefully — based on glimpses we’ve seen in the past — we finally see that breakout season from Jelani Woods as he alleviates some of the pressure Sanders, Chuba and Tylan will carry.