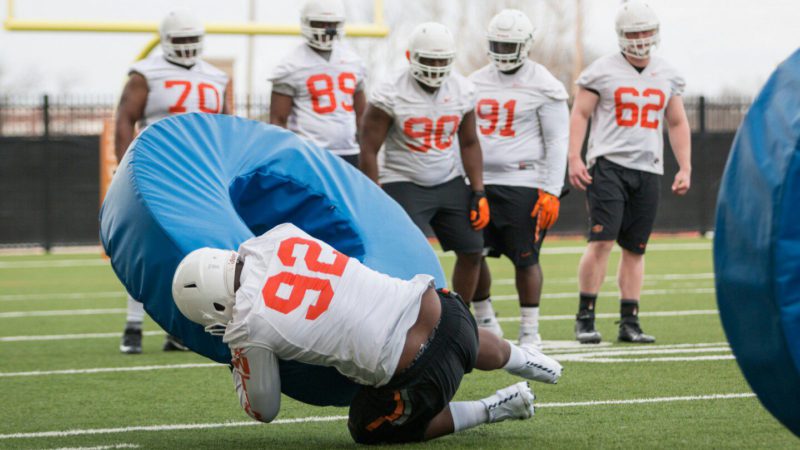 The Cowboy defense took a hit upfront with Vincent Taylor’s decision to declare for the NFL Draft. He was its best player so he’ll be missed. But the defensive line is still as deep as it’s ever been during Mike Gundy’s tenure.

Gundy is as excited about the strength he has in the trenches as he is their experience.

“We have nine guys that all squat more than 450 pounds. That’s what I like about them. They’re all somewhat mature. Their strength levels are very high and they run well. Their attitudes are good.”

As far as depth goes, the defensive line has plenty of it — and experience too.

So as spring practice rolls along, D-line coach Joe Bob Clements will be focused more on gaining continuity as a group and implementing some possible scheme changes that we’ll get to later.

“I think we’re back into that role where we can play a solid two-deep and rotate those guys to keep them fresh,” Gundy said. “In this league, that’s really important to try and make it through the duration and make it all the way through to November. In this league, your defense gets beat up in November.”

Speaking of beat up, the coaching staff will also be working to get Jordan Brailford — who was projected to start last season — back into the swing of things after missing 2016 due to injury.

“Hopefully, (Jordan) Brailford, who has been turned loose, will be able to develop and sustain the pounding because we really liked him in the Sugar Bowl. We thought he played as well as any of our defensive lineman in the Sugar Bowl and then we lost him to that stress fracture last year. If he’s up and running, he should give us an added lift and he’s really matured as a player.”

It appears we’ll continue to see some different looks from OSU upfront. Last season, the Cowboys went to a 3-3 stack (similiar to the style West Virginia plays) in several games down the stretch. The Cowboys recently hired Brian VanGorder as a defensive analyst and Mike Gundy talked about how he helps them from a scheme standpoint.

“We wanted to bring in another guy on defense to somewhat equal the staff,” Gundy on VanGorder, “but also to bring in a coach that has experience in a three-down defense.

“He has an extensive background in a three-man defense, and we’ve gotten a little bit more into that. Obviously we haven’t converted to that, and we won’t covert to it, but I thought it would be smart to bring in someone with experience in a three-down system.”

Gundy equated Big 12 quarterbacks to coaches on the field in their intelligence and ability to read a defense that is too set in its ways.

“If you don’t give them a different look sometimes and use some variation in your defense, they’re pretty good at picking you apart.”

The state of OSU’s defensive line has been its deepest and most stable over the last two years and if Clements continues bring in his dudes, there’s no reason to expect a drop off anytime soon.