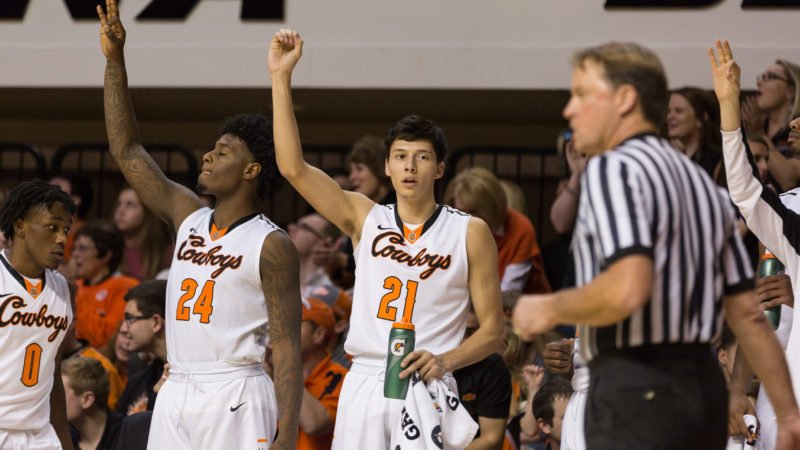 Lindy Waters III, or “Trey” as his friends call him, got off to a slow start in his first trip back to Norman on Monday night. Jawun Evans (almost single-handedly) kept the Cowboys in the game for the first 19 minutes. Waters, the freshman wing, logged seven first-half minutes without as much as a blip on the box score radar.

Then with the Cowboys down four with just under a minute left in the first half, “Trey” pried open the lid on the orange rim at Lloyd Noble Center. His first shot from the field amounted to three points and pulled the Cowboys to within one of the home team — a margin they would carry into the break.

The true freshman has seen his ups and some downs through the first 19 games of his collegiate career. He’s looked brilliant at times — hitting big shots and showing some grit on defense. At other times, he’s shown his age and even looked a bit rattled. But that’s to be expected from a true freshman trying to find his way — especially with a team and a first-year head coach also trying to find theirs.

Evans talked about the spark Waters provided off the bench in the Bedlam win.

“He stepped up tremendously,” said Evans “hit big shots, got some rebounds for us that we needed. I see him growing.”

After starting 12 of the Cowboys’ first 14 games, Waters was sidelined for four straight with a concussion. Those fell within the six-game losing streak his team called a start to conference play. During that stretch, Jeffrey Carroll pointed out the writing on the wall to Brad Underwood and cemented his rightful spot among the starters.

But with scrappy play and a nice touch, Waters continues to prove his worth and earn valuable minutes. While his teammates struggled from the field against OU, Waters had an ultra-efficient 18 minutes. He was 4-5 (3-3 from 3) and pitched in two rebounds, both the offensive variety.

As the second half of Bedlam got under way, the Cowboys had built a four-point lead when Underwood subbed in his freshman Normanite. In less than a minute on the floor, Waters hit another 3, giving the Cowboys their biggest lead so far (7 points). A minute later he tipped in a Lucas N’Guessan miss, answering a Kameron McGusty jumper.

After OU climbed back from a 10-point deficit, the Big Monday game became more ‘ug-fest’ than slug-fest. Oklahoma State went five minutes without making a single field goal and down the stretch made only two of their last 15 shots.

One of those two made shots will be remembered for years by OSU fans (and OU fans that are honest with themselves). Phil Forte hit the go-ahead 3 with four seconds remaining. It may have been more significant than the landmark 3 he made two days prior in Stillwater.

But the other made bucket was almost as important.

At the 5:15-mark, with Oklahoma riding an eight-minute stretch in which they outscored Oklahoma State 17-5, the Cowboys found themselves behind for the first time in 12 minutes.

Once again “Trey” got free and buried his third ‘trey’ of the evening, completing his highest scoring total in Big 12 play and giving the Cowboys life in a game where buckets were as precious as gold.

On a young and promising roster, maybe no player has more potential than Waters.

He can score. He can shoot. (Those are different). He can make plays for his teammates and he has the length to be a pretty good defender. The best thing he has going for him?