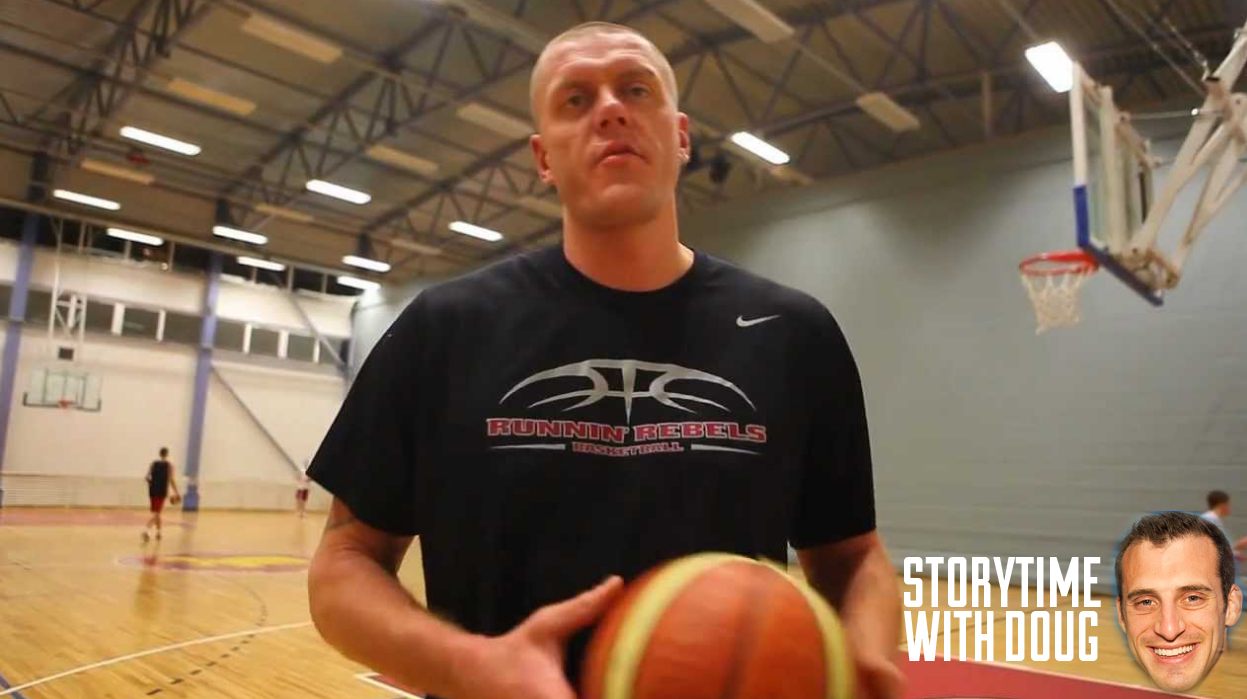 I emailed Doug Gottlieb recently 10 questions I had for him about his career, OSU sports, and some of his favorite stories. He sent back some gems. I’m going to bring them to you in installments over the next few weeks/months. This one is about his favorite story about a guy he played with in his career (I added some footnotes)..

We are playing at UNLV my senior year, second year in a row we play the Rebels in Vegas. I asked coach why we did that after the game he told me “that Billy Bayno couldn’t organize a fist fight.”[1. Bayno was the coach of UNLV at the time.]

This is the year after the “ballgame bitches” game.

Cut to coach and me walking toward the locker room at halftime. They had Kaspers Kambala, who the previous season had asked me were we wanted to meet up after the game and drink and gamble…during the game he asked this.

We were up 14 or so with 5 minutes to go and we were waiting for TV to come back to the game and he straight up asks me in a Ukrainian accent “Yo where you headed tonight, let’s grab some drinks”…I’m stunned and he is huge so I said, “sure dude, the Hard Rock Circle Bar, but we gotta finish this game first.”

Anyway, Kaspars was kicking our asses in the first half. Mark Dickel[1. THIS GUY.] was leading the country in assists and we were turning him over, their wings were relatively ineffective, but Kambala was besting us on the boards.

So coach asks me “What in the hell is wrong with those big guys?”

I turned to coach and said “Give me five minutes, coach, don’t come in for five minutes and I will straighten this shit out.”

So I walk in and ask Mase what he thinks is going on, Mase is quiet and he says “Yeah we are getting beat on them boards fellas.”

Mase is never one to call anyone else out. Glendon nods, and Joe starts saying “Yo we just need to play with some confidence against them big boys…”

So I go after Fred verbally. Fred is my boy now, but it was embarrassing and he knows it. So I said to Fred and Alex “You motherfu****s are playing like some f***ing p*****s. Last year Kambala just wants to drink Vodka with us and now he is pushing you two mother****ers out of the way?

That is embarrassing, we are on national TV and y’all getting thrown around.”

Fred is HOT. He did not like being called a motherf***er at all. Webber is kinda lost on the semantics and gets that he sucked, is in foul trouble and I’m on his ass.

Fred starts cussing in Swedish, but he taught us all the words so basically he is calling me the same thing I called him and we are close to chest to chest.

I let out a “if you were this tough out there we would be up 20.” That did it, Fred wants to throw down. So at some point Jason “Big Dady” Keep throws aside the chairs like they are a child’s toys and gets right in the action.

Dady yells out “Hey f***kers, Im a center too, you yell at one of us, you yell at all of us. Who wants some of this”

And he is dead serious.

Coach has just walked in with the staff and all of the sudden Mase says “Jason you didn’t even play, sit your ass down” and everyone is dying laughing at Keep.

Coach just asked if we got everything settled, I said yes. He literally said nothing and told us to go warm up.

Fred kicked Kamabala’s tail in the 2nd half and we won going away.

On a side note Keep tried to go up into the stands in the mid second half cause some guy was talking junk that he wasn’t in and we were up 20. I asked Keep what the hell was the matter and he said “Sorry DG, I’m just emotional man, first TV game and all.”

Joe and I told coach to put Keep in “coach you gotta put him in, otherwise he might go up in the stands and beat that dude’s ass.”

True story. Coach put him in.