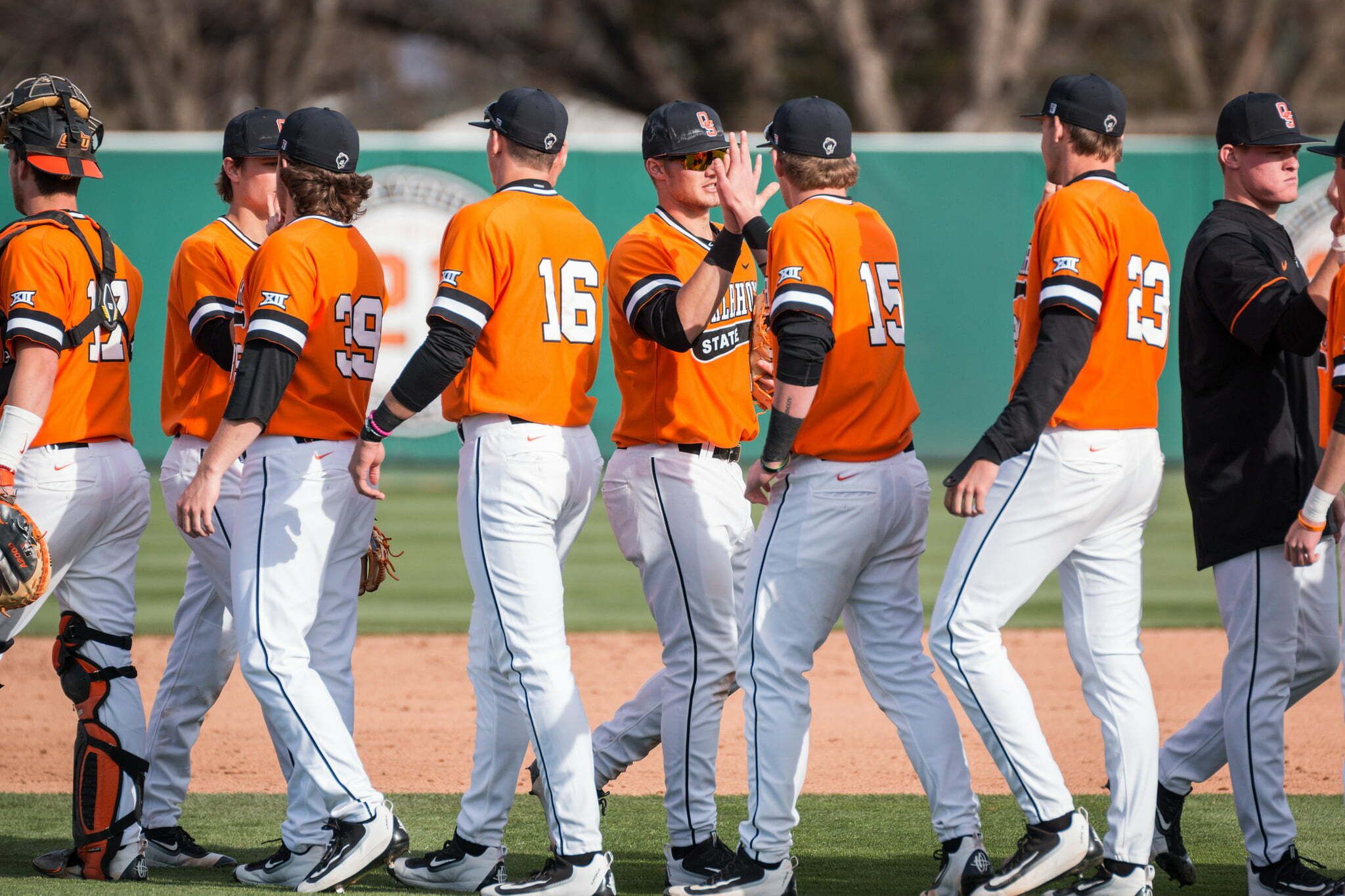 For losing two starting pitchers — Jensen Elliott and Parker Scott — for the entire season, the most bona fide reliever — Trey Cobb — for the first half of the season and fielding 13 first-year players in 313 games combined, winning a Big 12 Tournament title is pretty solid for the Oklahoma State baseball team.

On the other hand, a lot of people probably expected a lot more after a trip to the College World Series last year.

The Oklahoma State baseball team’s 30-27 performance this season should not be deemed a disappointment. Because it wasn’t. At least not when Carson Teel celebrated before Cameron Dobbs even caught the final out of the Big 12 Championship in Oklahoma City.

WE ARE THE BIG 12 TOURNAMENT CHAMPS!!!!! pic.twitter.com/hkAbpZkf5F

But no one should be rejoicing either. The Cowboys had their worst regular season record in 39 years and had to scramble on the final day of the season just to qualify for the tournament they ended up winning.

As senior Ryan Sluder put it after OSU’s 14-6 season-ending loss against Oral Roberts on Saturday, “It sucks.” It’s tough to know Tyler Buffett won’t have a Thomas Hatch-esque performance on the way to Omaha. It was equally tough because in his last outing with the Cowboys, Buffett gave up six runs in fewer than two innings.

But in some ways, the Cowboys’ season was saved that Saturday night over two weeks ago against Oklahoma when they drilled the Sooners 9-7 then 5-2.

“We could have quit before we went to face OU and we decided to fight,” Sluder said Saturday. “I feel like the one thing we came is a group – me, Cobb, Buff – said we wanted to leave this place better than we found it and I think that ultimately we’ve done that. I’ll be able to hold my head high.”

As all the seniors should. And for that matter, all the freshmen, too.

Coach Josh Holliday started a pair of true freshmen in the middle of the infield. They had to replace Donnie Walton, an All-American, and J.R. Davis, a First Team All-Big 12er.

And they did great. Ryan Cash hit .274 (T4 on the team) and went 4-for-5 in the Big 12 Championship game against Texas. And Cameron Dobbs was about as solid as a freshman could be in the field. He was better than more than half of the other Big 12 starting shortstops at a .957 fielding percentage.

And those were only two of the first-year guys. Cade Cabbinness tied Cash for that fourth spot in batting average. And JUCO product Cole Hearrean had the second most appearances of any pitcher behind Teel.

“Historically, this is the place to be for baseball, and we got a taste of that the last 20 days,” Buffett said Saturday. “Now the younger guys know what it’s going to feel like when they do it next year.”

It’s at this point, about 500 words deep into this article that I bring up in all honesty the two best players on the team. Garrett McCain and Garrett Benge were the only two on the roster to start every game, and they both have the opportunity to return next year. That’s all you need to know.

So, yes, I declared the season irreparable after OSU lost 11-5 against Central Arkansas at home right after its first conference series win in three tries, but to their credit, the Cowboys proved me wrong and made me buy a ticket for the Big 12 title game. Something I never dreamed I would have to do in 2017.

And yes, the season has ended exactly 22 days before it did last year, but a four-win streak in OKC meant it ended about seven days later than we thought it would.