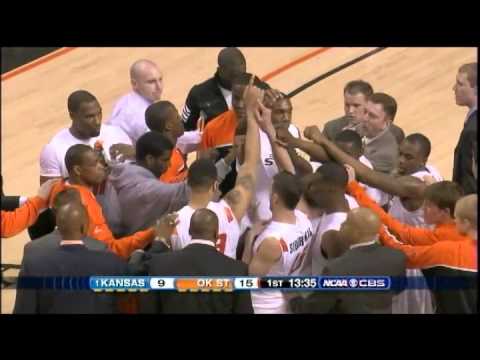 First of all, big thanks to Q for running the blog for most of this weekend while I was away with wedding activities. He did a terrific job and can play sidekick blogger extraordinaire whenever he’d like. I hope you guys enjoyed his stuff.

Earlier this week we posted a Travis Ford salute and jersey-hoisting tribute to the seniors on this year’s basketball team but now I’d like to write a little about what they’ve meant to us as fans over the last four years.

In order of importance…

Songo Adoki – Considering I’ve seen him “play” for all of 25 seconds (in the Baylor) game I don’t have many words. However, I do know what it’s like to be a walk-on, both personally and from friends, and there are times when it is not the most fun thing in the world. Yes, you get the jerseys and get your name on the roster but most of the year it feels like that’s all you get. You do the stuff in practice nobody wants to do, you take the seat on road trips nobody wants to take, and though you’re on the team, much of the time you don’t feel like you’re part of it. So big props to you Songo for gutting it out, especially in a down year like this one, and for giving us this epic quote,

Adoki said it has been his dream to play at OSU since he was 8, when a friend took him to a game at Gallagher-Iba Arena. Adoki watched Desmond Mason and immediately became a Cowboy fan.

Nick Sidorakis – I was calling for Eaton’s head whenever Sidorakis first got to Stillwater because I thought he was 5x the passer (and maybe player) Eaton was. It turned out I was wrong, and Sidorakis handling the ball made me more nervous than Prentiss fielding punts, but I still believe Sidorakis’ career was somewhat underrated. Granted, he was never destined to score 15 a game and make any kind of all-conference team, but he also never really got a chance to fit in and display what his primary skills were: passing and man-to-man defense. So thank you Nick for hanging around, for giving up your scholarship this year, and for never quitting on this team even though OU nation probably had it right this year when they nicknamed you, “Jersey Shore.”

Matt Pilgrim – I could probably write a book about this guy’s two years in Stillwater. As I’ve written ad nauseam, I don’t understand (and never will understand) Pilgrim. He looks like a homeless man’s young Barkley half the time but spends the other half making you wonder whether or not Travis Ford yanked him off the football team and asked him to suit up for a couple of years. As has been written, he definitely has some psychological signs of detrimental mental behavior which I’m sure inhibit his ability to perform on the basketball court.

That being said, he’s been marvelous for the last month. He’s cared, he’s rebounded as well as anyone in the Big 12 who doesn’t have a twin, and he’s showcased his gazelle-like propensity for beating bigs up and down the floor. So to you Matt, thank you for buying into what Travis Ford was selling thank you for never dogging it even when all of GIA turned against you. For some reason I think I was most proud to see you amble out on senior night with your parents, knowing you’re going to graduate, and realizing that we’d been wrong all year about you not caring. You did, and that’s all we ask for.

Marshall Moses – The first time I ever heard of Moses was 5 years ago when one of my friends called me and said, “dude, we got this guy, and he can go through his legs from the foul line in jeans and dunk.” I’m not entirely sure that’s accurate but if this video is any indication I’m not entirely sure it’s not either. Moses’ career turned out far differently than I envisioned it coming in. I thought he was going to be more Andre Iguodala than poor man’s Kevin Love. In retrospect though, he was exactly what this team needed these past two years — a consistent low post threat who only cared about snagging boards and improving his left-handed baby hook.

He’s been underrated too. As a second or third banana (which is what he should be) on a great Big 12 team he’s the ideal player: unselfish, always plays hard (sometimes too hard), and loves his teammates. As the go-to guy trying to single-handedly drag a terrible Big 12 team to the tournament he seems undersized and overly-aggressive. He was basically shorter, more rotund IMac but never appreciated as such.

Moses has come so far — from the emotionally-charged first two years to the arrest for marijuana possession to the (hopefully) All-Big 12 senior season, he’s seemingly grown up the last four years. So thank you Moses for willing GIA to push you to wins, for learning from your mistakes, and for always imploring every single one of your teammates to give a crap about playing basketball and becoming better. Just like the careers of Pilgrim and Sidorakis, that’s all we can ask for.

This senior class won’t be remembered for being anything close to great and won’t really be remembered for one of “those wins” that we talk about on late-night road trips or in sports bars years from now with alumni and friends. But as Q pointed out in his recap yesterday, unlike the Boggan and Monds team a few years back, they would not give in and would not fold even as everything around them came crashing down. They were willful and really seemed like they enjoyed playing basketball more times than not. We didn’t give them a lot to work with but they took what they had, put a heart around it, and gave it back to us every time they stepped on the floor.