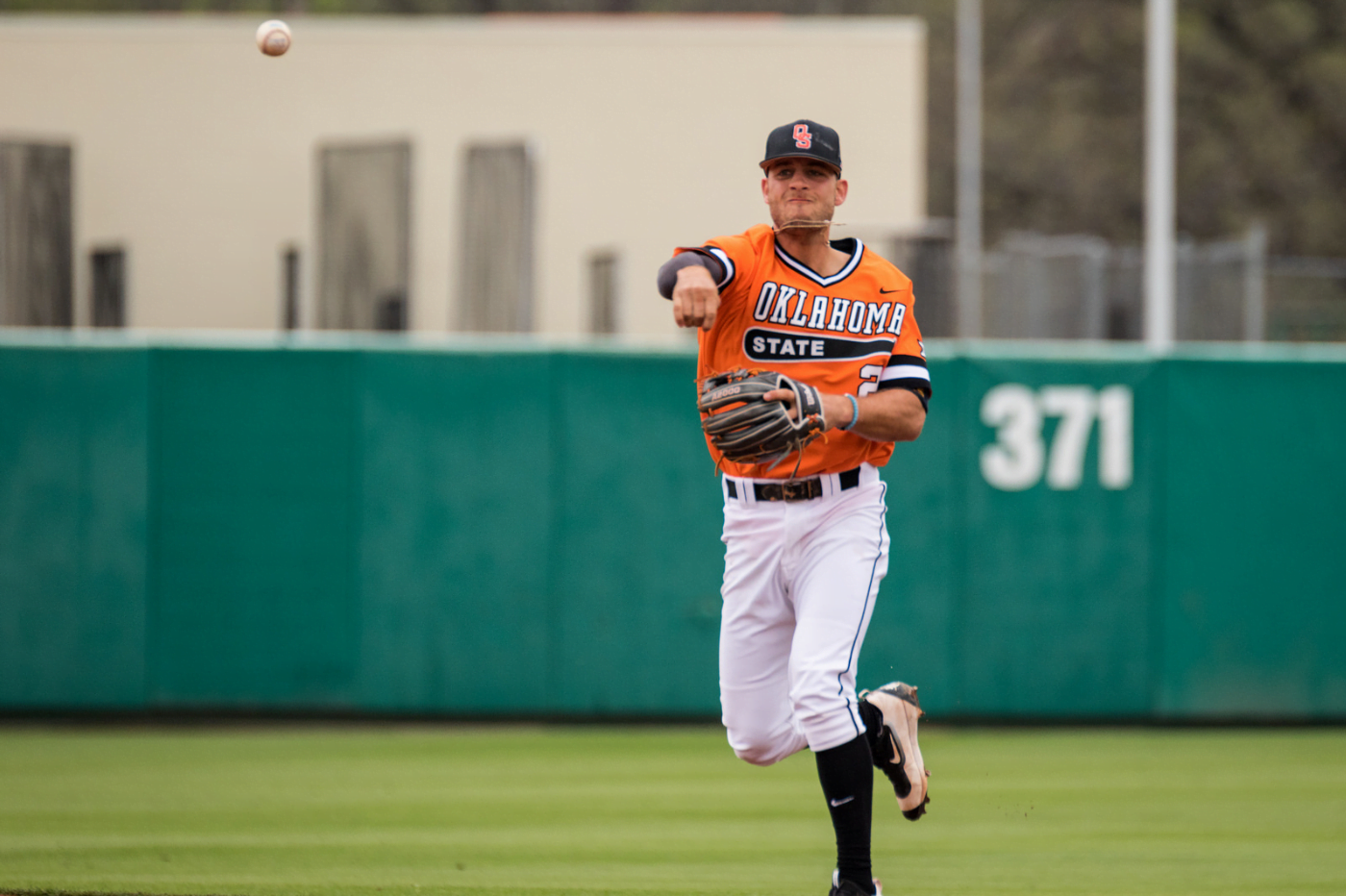 After winning their first pair of series this season, the Cowboys have dropped the past two. Oklahoma State’s baseball team fell 6-5 to Eastern Michigan on Sunday afternoon, losing the rubber match and surrendering the series to the Eagles. EMU held a 3-9 record entering this weekend. The series loss comes a week after dropping two of three games against Arizona State.

Here are a few takeaways from Sunday’s finale.

The game featured three lead changes, with the Eagles putting the last runs on the board. EMU found itself trailing 1-0 after the first inning, but they scored a pair of runs in the fourth to recapture the lead.

The Cowboys struck back with two runs in both the fifth and sixth innings to take a 5-2 lead, but they would not score after that. EMU scored four unanswered runs to end the game, three of which came in the seventh. OSU manager Josh Holliday said it was similar to Saturday’s game, when the Cowboys jumped out ot a 4-0 lead in the third but eventually lost 9-7.

“We had our chances with the lead, to expand the lead, and we weren’t able to do so,” Holliday said. “Eastern Michigan did a fine job there of fighting back at the end and doing what was necessary to win.”

C.J. Varela had a solid outing

Sophomore C.J. Varela earned his third start of the season Sunday and did enough to earn the victory. He pitched five innings, allowing only two earned runs on four hits and three walks. He also struck out two.

However, Reza Aleaziz didn’t have as much luck. Aleaziz gave up two earned runs in one inning, and he issued three walks. Cole Hearrean and Peyton Battenfield, The Cowboys’ next pair of relievers, combined to allow three hits and two runs in the next pair of innings. Closer Carson Teel entered the game in the ninth and pitched a perfect frame, lowering his ERA to 1.45.

“C.J. went out and gave us five solid innings,” Holliday said. “Gave us a good chance to win the game and handed the ball off and did his thing. He’s done that now in back-to-back weekends and done a good job for us.”

Andrew Rosa’s knack for getting hit is paying off

The Cowboys have been hit by a pitch 16 times this season. Andrew Rosa has been on the receiving end of eight of those pitches. Rosa and Holliday don’t know why he’s the one getting hit more than others, but Holliday said it seems to happen often to one player each year. The extra opportunities on base have led to more scoring; Rosa leads the Cowboys with 15 runs.

Holliday provided more insight as to why this is happening.

“Sometimes certain guys have a way about them,” Holliday said. “Maybe they’re trying to pitch him inside because he’s doing a good job outside, and then those balls get away a little bit. It seems like every year there’s a player that seems to get hit a lot, and right now, Andrew is definitely that guy.”

Tough losses could be beneficial in the long run

It’s known that the Cowboys didn’t look all that great midway through the 2017 season. Regardless, they finished on a hot streak, winning the Big 12 tournament. How you look at the end of the season is what matters most. Giving up a lead and eventually losing hurts immediately, but the lessons learned could help fuel the Cowboys down the road when they inevitably face adversity again.

“When you’ve been in situations previously, you might have a better idea of how to handle them moving forward,” Holliday said. “I’d like to see our response late in the game, behind at home, to be better.”