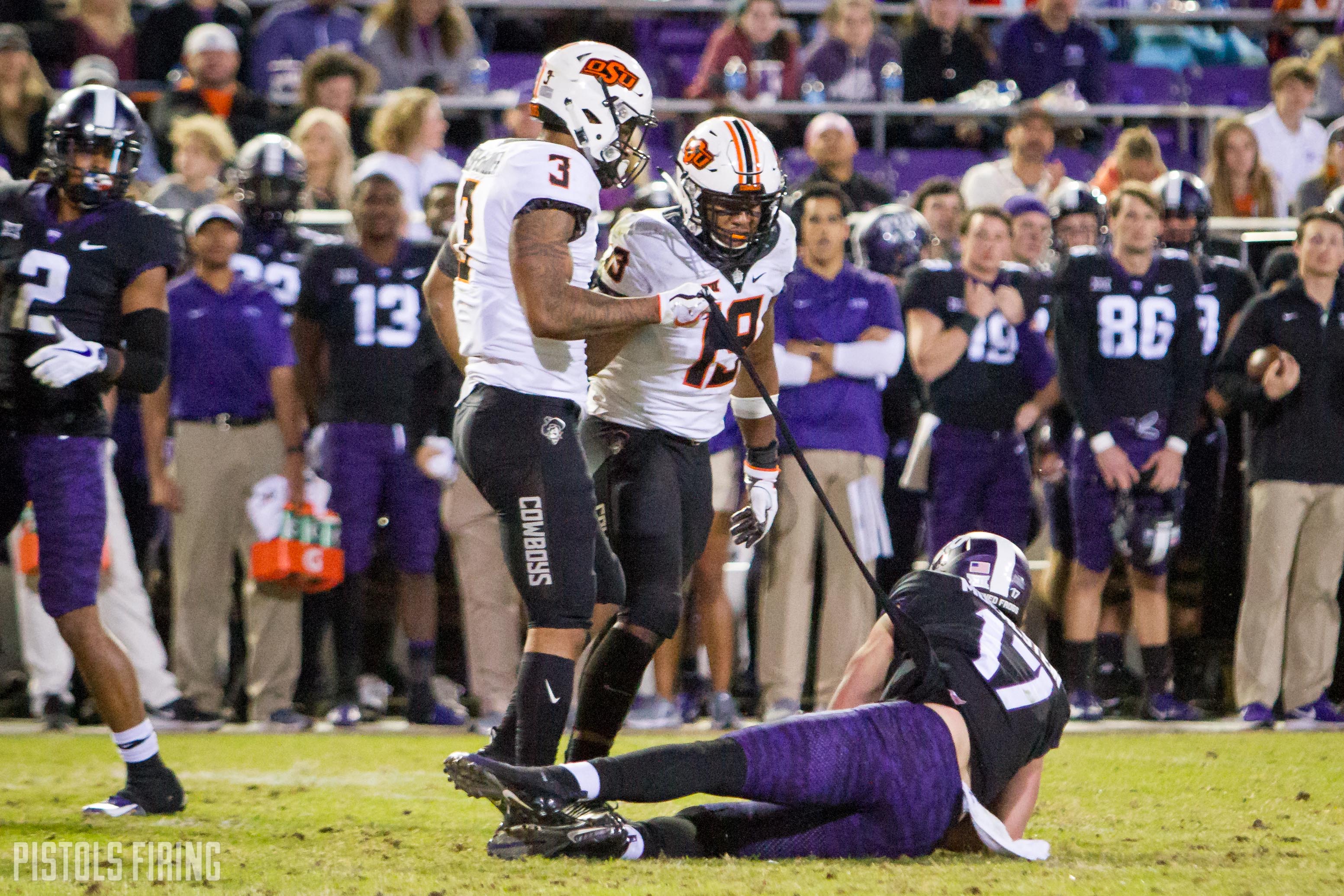 Oklahoma State ended its roller coast of a regular season on the downward slope with a head-scratching loss to TCU. Offensive ineptitude best describes most of the first three quarters. Mistakes were commonplace, and if OSU had an opportunity to sabotage itself, it did so.

So, in an effort to put some type of bow on 2018 heading into bowl season, let’s debrief the Cowboys’ sixth loss of the year.

The Pokes defense came to play early, sacking TCU’s own fifth-year QB darling Grayson Muehlstein twice on his first two snaps. The second one hit the grass and Enoch Smith handed the ball to Taylor Cornelius 19 yards from pay dirt. It took two plays to get into the end zone and then another 10 seconds to realize that there would be no score. A penalty on Tylan Wallace negated Tyron Johnson’s sixth receiving TD of the year and the Pokes settled for 3. This would be a recurring theme on the evening (as it has been all year).

The Cowboys would show some mettle and attempt a fourth quarter comeback, but were a play late and a touchdown short. The Horned Frogs obviously wanted the game more (according to Mike Gundy) and secured their own bowl berth with win No. 6, while OSU packed it in for bowl season.

Who Gets a Brand Sticker?

This is a tough one. I supposed I could give it to Taylor Cornelius for leading the team in rushing yards and TDs, as well as showing some grit down the stretch, but it was his inaccurate throws scheduled off night that mostly put the offense in the hole that it started in.

I could have given it to Chuba Hubbard for his efforts, but it was a muffed backward pass-turned TCU scoop-and-score that swung the momentum the home team’s direction.

Tylan Wallace? He had the aforementioned drive-killing penalty and managed only 64 yards on 11 targets in what was his final chance to make his case before Biletnikoff voting commences on Tuesday.

I’m not sure we can hand out any helmet stickers for an offense that waited until the fourth quarter to makes plays, as Mike Gundy noted. Aside from giving it to Jalen Reagor, I think I’ll leave that section blank.

In his final Big 12 game, the senior linebacker was one of the few who showed up to play (all were on defense).

Phillips finished with team highs in total tackles (12), solo grabs (7), tackles for loss (2) and QB hurries (2). But beyond the numbers, he was just disruptive all night and made play after play.

The question of where, and with whom OSU will go bowling is yet to be answered. But regardless of whether it’s San Diego State in the Cheez-It Bowl or a directional Michigan team in the Armed Forces Bowl, the question is simple in my mind. What is there for Oklahoma State to accomplish?

Sure the Cowboys would like to end their season on a good note, and 7-6 looks much better than 6-7. And the additional practices should help especially the younger players that Mike Gundy and Co. will be counting on in 2019.

But this season mostly feels like a throw-away where its players and coaches spent good chunks of it just going through the motions. I know that’s not 100 percent ackerut, but it is something that has popped into my mind several times since September while watching this team.

I guess we won’t know the truth behind that until at least next year (or maybe ever), and maybe that’s just the uninformed opinion an outsider lookin’ in, but the Cowboys have done little to disprove the notion that they lack leadership at several spots up and down the roster. With Justice Hill possibly on the way out and a QB1 position to reestablish, they feel a little rudderless as a program moving forward.

Another defender who came to play was freshman safety Kolby Peel. He has been a bright spot in Jim Knowles’ group this year and he made a huge play that gave the Cowboys’ offense and chance at the equalizing possession late.