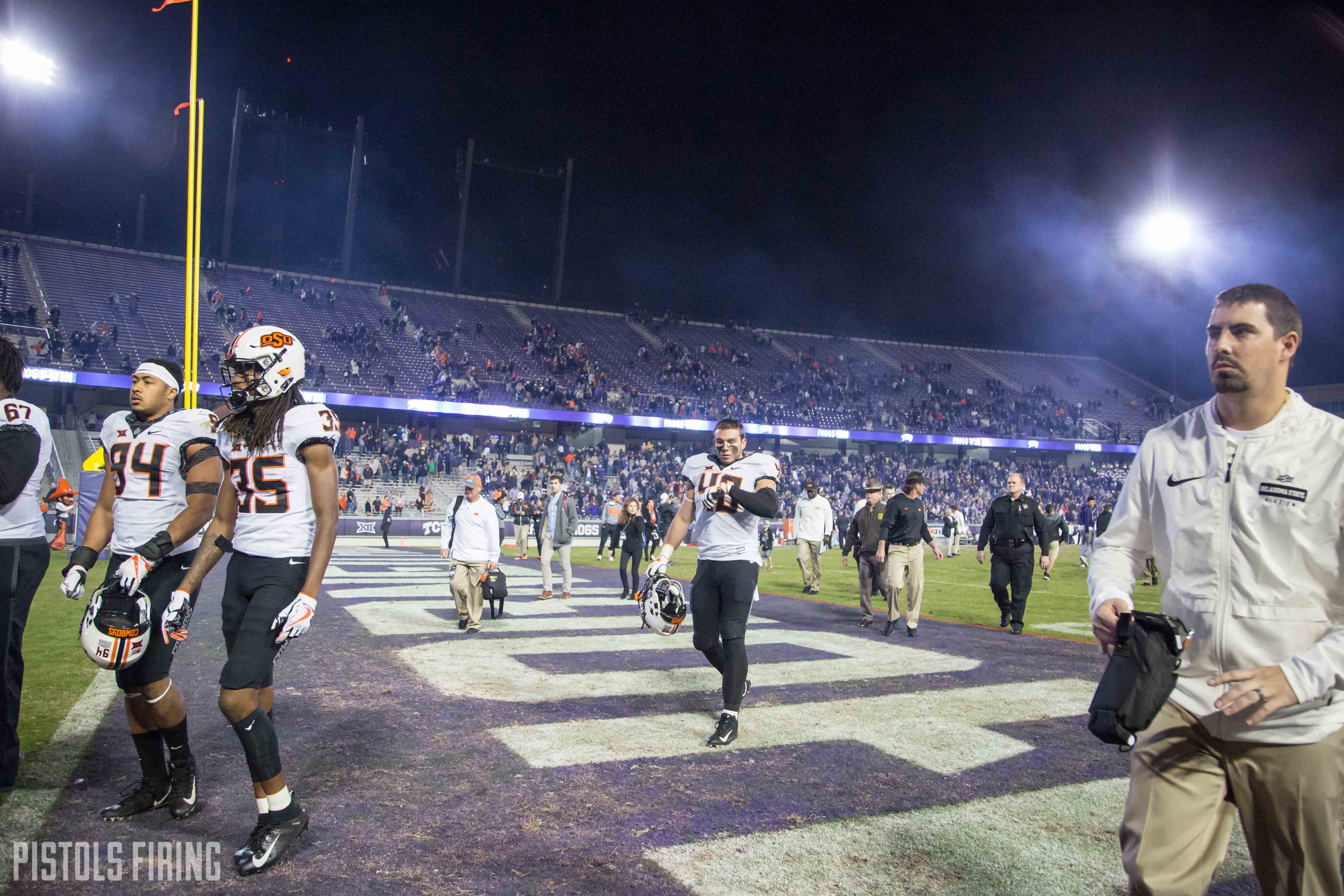 Oklahoma State stumbled into the postseason with a yet another head-scratching road loss to follow up a top 10 win. Along with spreading the Big 12 bowl cheer ahead of Christmas, the loss to TCU further muddies the waters for where OSU and the rest of the league (or at least bottom half of it) will land come Selection Sunday, December 2.

For Oklahoma State, it means that Cowboys are No. 7 among seven bowl-eligible Big 12 teams. OSU can thank Kansas State for choking on its own 17-point lead in the fourth quarter against Iowa State. That win would have put OSU at No. 8 and possibly left them to an at-large bid for the iRobot Roomba Floor Cleaner’s Bowl (not an actual bowl game, I don’t think.)

When the CFP committee doles out invites to its playoff games and the New Year’s Six bowls, OSU will be on the outside looking in, but how those selections shake out will at least set the stage for where and when the Pokes go bowling.

As it currently sits, no Big 12 team is slated to be in that Final Four. Oklahoma was tabbed the No. 6 team before its dramatic shootout in Morgantown. The Sooners will have a chance to further build on that resume when they face a Texas team that is No. 14 (and could ascend a bit after its road win over Kansas).

The only chance for the Big 12 to get a team in would be for the Sooners to exact revenge on the Longhorns in dominant fashion in the Big 12 Championship Game and hope the committee doesn’t mind leaving Ohio State out after walloping their darling Michigan defense. The Buckeyes could help the Sooners out by not doing that to Northwestern in the Big Ten title tilt.

For our purposes, let’s say OU beats Texas but is left out of the Final Four. That puts them in another NY6 bowl and leaves the following choices to these Big 12-affiliated bowls, in order of draft pick.

And here are the teams they would be picking from, ranked in order of record.

These bowls can choose any of team they want once they are one the clock. So a Liberty Bowl could technically take the Cowboys over Baylor just because they might be a bigger draw, but at this point you’re just left to each bowl’s choice. Things like proximity to fanbase, TV numbers, etc. will help dictate those decisions.

Also, if there are not enough teams from a certain conference to fill those spots, an at-large bid could see a Group of Five team fill it. So if Oklahoma State makes the Cheez-It bowl, they could play say BYU instead of the No. 7 Pac-12 team.

What I think this probably means for the either the Cheez-It Bowl at best against No. 7 Pac-12 team (Arizona State), or the Armed Forces Bowl against the No. 5 American Conference team, say Houston. So that’s a December 26 late game in Phoenix on ESPN or a December 22 afternoon game in the stadium they just lost to TCU at in Ft. Worth.

It’s not the best ending to an up-and-down season, and it’s made all the more frustrating when you’ve seen the level this team could play to. Let’s just hope that the Cowboys can end with a win and that the additional bowl practices pay off in some way for them heading into 2019.