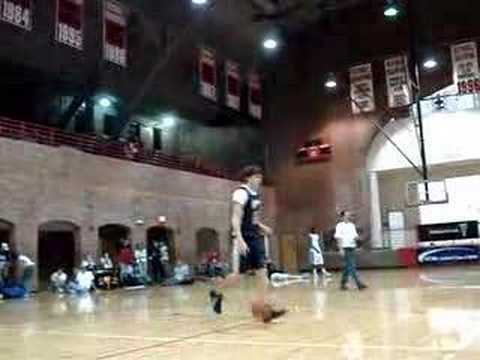 With all the pomp and circumstance (but mostly pomp) still ringing in my eardrums late into last night, I got to thinking about things I’d rather rank than recruiting classes and high school athletes I’ve never seen outside of grainy YouTube videos. The list was long and not necessarily respectable…for example: 10 best point guards in OSU history, 20 loudest basketball venues in the country, 8 best twitter apps I’ve downloaded in the last two months, 35 best Mexican restaurants in the DFW metroplex according to Khloe Odom.

I’m obviously kidding about that second to last one but the point remains – I refuse sell my soul to recruiting just because a bunch of coaches and teenagers and sports television networks have sold theirs to making it a money-grubbing extravaganza that serves as the buffer between the end of the bowl season and the beginning of March Madness.

And so we’re left with this (one of the many things I’d rather rank), the ten best dunkers in Oklahoma State basketball history.

Note: sorry most of these clips are from the NBA, it’s pretty tough to find any OSU dunk clips that I didn’t post myself in the last two years…

Honorable mention: Nolan Cox
Yes, he’s my boy. Yes, he’s a contributor to this blog. Yes, we roomed together in college. But if you don’t think he’s at least in the running for “best white dunker in school history” then you’re crazy. Or you’re related to Tyler Hatch. One of the two. Sadly, no footage exists of him dunking (or even scoring for that matter) in an actual game. But at least there’s this!

10. John Starks
I don’t much remember his career at OSU, mostly because I was three years old when it happened, but I know he did this…

9. Bob Kurland
I mean you kind of have to put the guy who was the first person to ever dunk in a college basketball game on this list, no? Also, how would players from Kurland’s era have responded to anything Markel Brown has done in the last 10 days? Would they have just turned their uniforms in and joined the army post-WWII citing that Markel’s basketball stunts were too dangerous and physically detrimental to the safety of those around him? I mean nobody had ever even dunked before, what if Markel came in throwing down off-the-backboard slams and putting his knees in people’s faces? I need to know these things…

8. Janavor Weatherspoon
Listed at 6’1 but he wasn’t an inch over 5’9. He was tall Nate Robinson in GIA though and always provided a lift when you needed it most. Also, how unbelievable is this video I dug up? The Polish Spoon! The crowd has no idea how to react after the first one, their cheer says “oh, the crazy American just did something we do not see often, we should applaud.”

6. Torre Johnson
See second to last sentence for Tony. How sick are these Euro-clips by the way? I think OSU does a pretty great job with its YouTube page but I’m not sifting through full two hour games to find one clip of Torre Johnson throwing down. That’s what this page will be for once it’s fully stocked with Markel Brown and Le’Bryan Nash highlights in a few years…

5. Melvin Sanders
I can’t find a single clip of Mel throwing down. If you can, you’re significantly better at the internet than me. For the youngsters – think Markel before Markel was Markel. In a lot of ways actually, Markel is just Melvin 2.0 with a chance to be a better scorer. They were both long, uber-athletic swingmen with crazy hops and the ability to guard the other team’s best scorer.

4. Markel Brown
I hate myself for this, but he’s going to blow past Joey next year (if not this year) and make a run at the king. The only argument I can make for Dumas and Graham right now is “they did it for longer” and the general argument for Desmond over Markel is “Desmond didn’t need to dunk ON somebody for you to come out of your seat.” That’s…ahem…changing. Also, the one below is going to go down as his most underrated dunk ever: “I HOPE THEY WORK THE PHYSICS OF THIS DUNK INTO A MATH PROBLEM ON YOUR SEMESTER EXAMS, BOYS!”

3. Richard Dumas
The man had no distinct regard for the emotions of mankind. He also had no regard for the NBA’s substance abuse policy. He could have gone down as one of the five best professional athletes to play sports at OSU, but now will only be remembered as “that dude whose career overlapped with Byron Houston’s who flamed out in the NBA even though he was illogically talented and the 4th best player on possibly the best NBA Finals losing team in the last 30 years.” Or that’s how I remember him.

2. Joey Graham
He had a couple that were in the pantheon including one against Memphis in the second round of the ’04 dance and this one against UTSA (courtesy of Harry Sneed). He also had this oop from Lucas against Texas in 2004 to seal the Big 12 title…

1. Desmond Mason
Part of the reason Desmond’s legacy looms large over Markel right now is because he had the ability to change the course of an entire game with his slams.

Luke Axtell just hit two straight threes to tie things up on Big Monday with three minutes left in the first half? Oh, okay, Joe Adkins sets a back screen for Desmond and Gottlieb lobs a viscerally stunning no-look pass which Desmond proceeds to physically ram down Eric Chenowith’s throat.

OSU only goes up by two but if you’re Kansas, you just aren’t recovering from something like that. Crazy as it sounds, he had the ability to not only affect old GIA, but to infect them with this intangible thing that 6,000 maniacs took, internalized, and used to close games. OSU lost three games at home in Desmond’s junior and senior years…if that tells you anything.

That was something Markel did against last Wednesday, you could tell the crowd made Missouri feel that dunk for the rest of the game. They closed so hard. That was one instance though, Mason did it all the time.

Everything about this video says: “you aren’t catching me Markel, it’s just not happening.”

Hey that was fun, let’s do more “things I’d rather rank than recruiting classes and high school athletes I’ve never seen outside of grainy YouTube videos” lists in the future. Taking write-ins in the comments for what you guys and gals want to see.