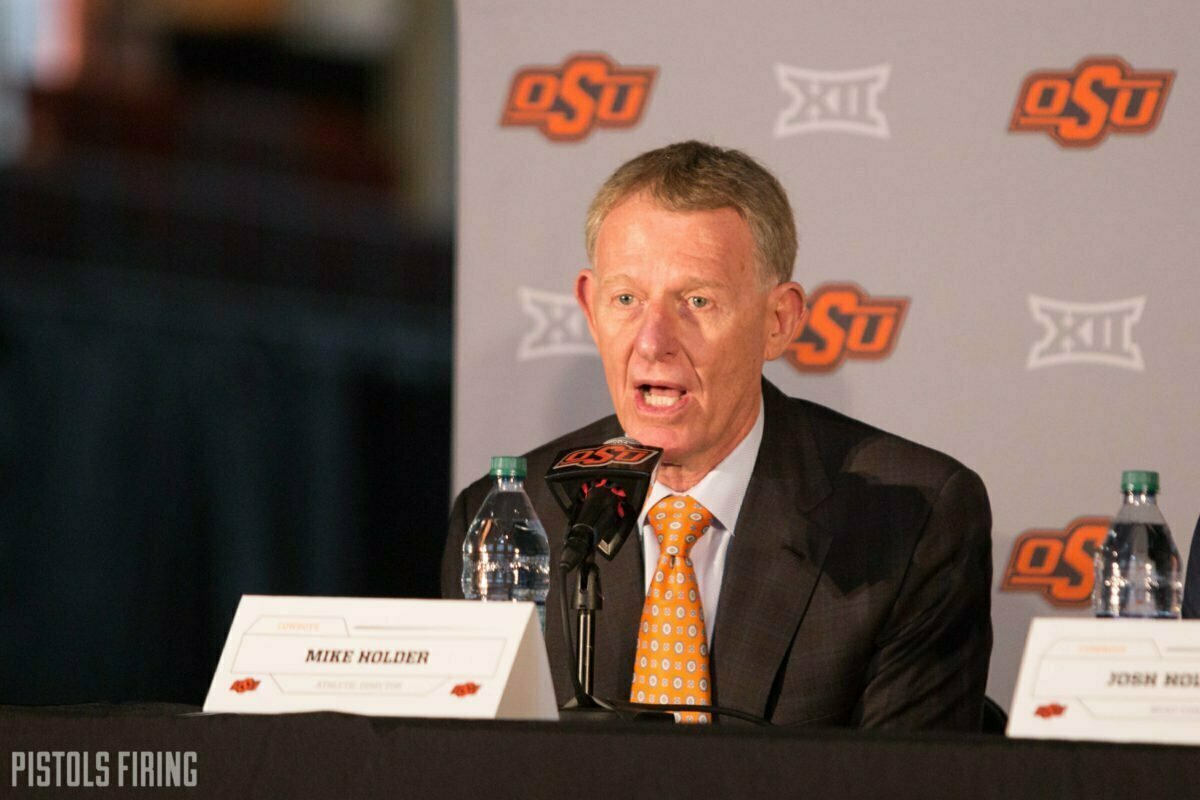 Mike Holder has been the athletic director for Oklahoma State since September 2005, and he’s accomplished a ton since then.

First, let’s rewind to the morning of March 18, 2017 when Oklahoma State fans found out that Brad Underwood was bolting Stillwater for Champaign, Illinois after just one season.

First came shock and anger toward Underwood for bolting for the bucks after convincing us all he’d found his own personal heaven. But once reports of the strained relationship between Underwood and Holder started to come out, the vitriol and venom turned to OSU’s athletic director. Again, he had ruined the basketball program, just one year after finally ending the Travis Ford reign. Despite Mike Gundy continuing to stick around, Holder’s rumored cheap and stubborn ways had finally run off a coach that the fan base adored.

Then, to make matters worse, Holder did the unthinkable; instead of going out and rectifying the problem by hiring a big name coach, or the OSU basketball program’s favorite son Gottlieb, he promoted a no-name assistant with zero head coaching experience.

Those are only the things we all knew about. Behind the scenes, Holder’s Moby Dick, a new baseball stadium, was stalled thanks to a lack of funding. Holder seemed to be unable to do what he was best known for — raising funds.

In the months that followed, numerous articles, tweets, and posts talked about not if but when Holder would leave his position, and questioned if it should happen sooner or later. Tack on the hiring of Chad Weiberg as Deputy Director of Athletics — and assumed AD in waiting — and the sharks seemed to be circling.

On Wednesday, the athletic department announced that now incredibly popular basketball coach Mike Boynton had agreed to a new contract that would keep in Stillwater until 2023. And unlike the last time Holder gave a coach a new contract, this one was sensible and good for the program.

It was the icing on the cake of a season where OSU fans not only bought back into the basketball program, but fell in love with the new head coach. A head coach just 12 months before fans were outraged about. A head coach that Holder was smart enough to see what we have all had the luxury and privileged to see over the duration of the last season.

I think Boynton actually said it best himself.

“One year ago they provided me with the opportunity of a lifetime,” he said. “They believed in me, and their leap of faith is greatly appreciated.”

As if enjoying being right when everyone else was wrong wasn’t enough, Ahab finally nabbed his White Whale. On Thursday, Oklahoma State officially unveiled the plans for a new baseball stadium.

Holder’s big dream was always the athletic park. But the pinnacle of that was replacing the home field of the Oklahoma State baseball program. And boy are they. This stadium will put a lot of minor league teams’ stadiums to shame.

There have been many high points both for Oklahoma State athletics as a whole, and for Mike Holder personally since he took over. Coaches he has hired have won conference and national titles. All credit for T. Boone Pickens’ major donation, and the completion of the football stadium with with his name on it, go to Holder. Those are just a few.

But no 24 hours have, or are likely to, top the one he enjoyed from March 28 through March 29.