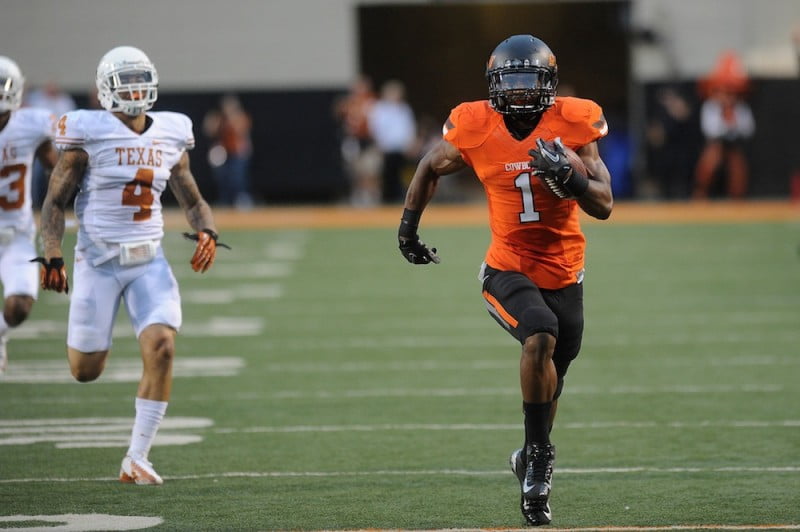 Slater had the story: Mike Gundy: “I think that in five years, you’re going to see the SEC playing offensive football like this league.”

That got me curious. I put on my loser cap and performed a swan dive into the numbers. If you have followed football at all over the past several years you have certainly noticed the up-tempo styles of certain teams and, more generally, conferences. I wondered which teams and conferences are the fastest and which are the slowest.

We played three of those teams and didn’t beat a single one of them. Sorry to start off the list with a punch in the gut. By the way, this year’s OSU squad is 17th on this list at 116% — our fastest team in the Gundy era.

K-State is averaging 61 plays/game so far this year. This has to be the only school in the country where the head coach’s age is greater than the number of plays they run, right?

The team with the slowest average over this time period is Temple at 90%.

How about that. The Big 12 has been on a lightning quick record-setting pace for the last four seasons, getting faster each year. Only one other conference cracks the top 5. In case you are wondering where the 2012 Big 12 is, our teams are averaging “only” 103% of the national average this year. The national average is up (more on that in a minute) and some Big 12 schools are slowing down a bit this year, plus we have the anchor in Manhattan pulling the average down.

The Big 12 has the fastest average over this time period at 104%.

The SEC has the slowest average over this time period at 96%. 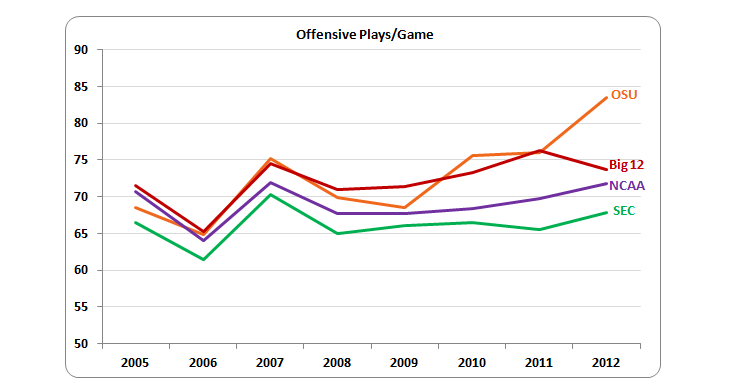 As the chart shows, plays per game are generally on the rise across the country. The Big 12 has been above the national average in every year since 2005. The SEC has been the slowest or 2nd slowest BCS conference in every year since 2005. The two conferences play very different styles of football, and I think it’s fair to say that the national media looks down upon the Big 12 style.

One more. Where is Oregon? They have been the 3rd fastest team over this time period at 110%.