Well it’s not really the morning anymore but you’ll have to excuse me, I was busy constructing this 1,800 word Arizona recap.

On to the stories…

Chatmon on how NFL-ready Blackmon looked – I wish I could refute this, all of it really, but I can’t and he can’t and he’s leaving. Sorry folks.

Jenni Carlson’s write-up on the Alamo Bowl – The last paragraph is my favorite part.

Good recap of the game by Ubben – “Oklahoma State wins 11 games for the first time in school history in a season that it was picked to finish fifth in the Big 12 South. Oklahoma State was easily the biggest surprise in the Big 12 this year, and Weeden, Blackmon and Hunter were the biggest reasons why. The biggest offseason loss for the program will be offensive coordinator Dana Holgorsen, who is headed to West Virginia, but whoever replaces him will have plenty to work with even after Hunter graduates and if Blackmon leaves for the NFL. Weeden seems likely to return in 2011, Oklahoma State returns all five offensive linemen, and young skill position talent like running backs Joseph Randle and Jeremy Smith and receivers Michael Harrison, Josh Cooper and Tracy Moore look capable of being dangerous in 2011.”

Andy Staples on how OSU will affect college football in 2011 – “The success of the fast-break offenses at Oregon and Auburn will inspire even more coaches to stop wasting precious seconds on brief meetings to distribute information that can just as easily be delivered to the entire offense almost instantaneously by holding up a poster on the sideline featuring photos of SI.com columnist Stewart Mandel, a jackalope and Dora the Explorer. Take a look at the top-six scoring offenses in 2010, in order: Oregon (no-huddle), Boise State (some no-huddle), Oklahoma State (no-huddle), TCU (huddle), Wisconsin (huddle) and Auburn (no-huddle). Oklahoma, the only program in the nation to crack 1,000 plays in a 12-game regular season, has won two Big 12 titles in three seasons running a hurry-up, no-huddle scheme.”

Dr. Saturday on the loot OSU players walked away with – “The Alamo gift bag does players right on multiple levels, hitting them with the big-ticket electronics (a Microsoft Xbox 360 with Kinect; iPod Shuffle), the everyday niceties (a Fossil watch) and the sentimental keepsakes (a team panoramic photo). They throw in a pair of headphones and a $20 Game Stop gift card, too, which is about all a 19-year-old with a long offseason ahead of him can ask for.”

This picture of Gundy trying to hoist the trophy is hilarious.

This picture of Holgorsen (along with the write-up) is even funnier.

Is Weeden throwing up the claw in this pic? 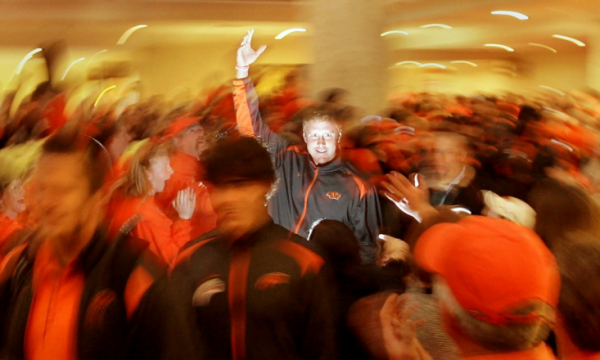