1. Incredible story by Jimmie Tramel on JPO’s upbringing – This is stunning, really. JPO and his family used to sleep in a car for months at a time because they couldn’t afford an apartment. And he plays chess and watches Mythbusters? Make room at the top Markel, I’ve got a new favorite player.
(Tulsa World)

2. The O’Colly with an epic piece on Tony Allen – Though at this point it’s getting difficult to not write something epic about him. He basically writes the stories himself, all you have to do is put the words on paper. (O’Colly)

3. A lengthy guide to the OSU baseball season – Includes a positional breakdown, quotes from Frank Anderson, and a full schedule overview for the 2011 campaign. I probably learned more from reading this than I would have by going to the first three series. Also, you can watch Frank’s full press conference from yesterday here on youtube. (okstate.com)

5. Helsley with an equally good column on the new playcaller – “Ultimately, nobody cares other than score points and win games,” Monken said. “And that’s why I’m hired. And let’s face it, if I don’t do that, a good friend of mine will have to fire me. And I wouldn’t expect anything different. I know that’s part of it.” Okay, I’m in now, the whole “all I’m here for is to score points and win games” sold me. (News OK)

6. Matt Hinton with a more neutral look at the Monken hire – “‘Flexible’ may be as good a hint as Cowboy fans are going to get as to the identity of the offense in the fall, especially if it begins to evolve into its nearest cousin, “balance.” Before Holgorsen’s version of the “Air Raid” lit up the skies last year, the offense remained under the thumb of head coach Mike Gundy, who consistently produced one of the most balanced attacks in the country” (Yahoo)

There were three yesterday that were too good to pass up…

First, your “compliment that doesn’t seem as great when you put it in perspective” of the week:
“Last season, Andrew Heaney became the first OSU freshman to lead the club in wins since 2001. He was 5-4 in 16 appearances, including 10 starts, as a Cowboy rookie.” – okstate.com

And (who else?) Tony Allen puts an APB out for Travis Ford, whose name he might not know…”I actually have been trying to get in tune with the head coach, I’ve just been so busy. So if you could get that out there, Tony Allen is looking for the head coach at Oklahoma State.” -Tony Allen

Lastly, Berry Tramel unveils this older one…”Part of the arrangement was, he’s going to let me do the deal” – Dana Holgorsen

Somebody get the ice melt out for the baseball field… 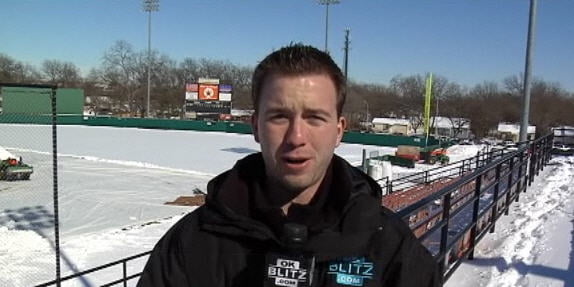 I don’t know who “IAMSAMMY5” is so if any of my readers do please pass it along so I can look him up..

This guy takes a hilarious look at what would happen if multiple schools adopted the new Oregon basketball court look. Also we got some GREAT tournament news yesterday.