1. Curtis Luper tried to steal Herschel Sims – “On Monday night – about 36 hours before he was scheduled to sign a national letter of intent with Oklahoma State – Abilene (Texas) High School running back Herschel Sims received an unexpected phone call. At the other end, Abilene coach Steve Warren reports, was Curtis Luper, running backs coach for the national champion Auburn Tigers.” What’s even more stunning than the call is the fact that Sims said “nah, I’m good” to the defending champs. I already love him. (Tulsa World)

3. Ubben gives OSU’s recruiting class a B – “Oklahoma State has to feel really good about this class. Skill position talents Walsh and Sims have been longtime commitments and provided very little drama down the stretch.” Thank God, I don’t need Sims’ mom forging his signature or Walsh pulling out a mini-Pete and setting it on his press conference table. (ESPN)

4. Final recruiting rankings – Rivals has OSU at #28 right behind A&M and right in front of Iowa. ESPN has them at #22 ahead of Washington, South Carolina, and Ole Miss. And Sports Illustrated doesn’t have them in the top 25. The bottom line? Who cares.

5. Good writeup on the Mizzou game by Samuel at CRFF – “The Cowboys showed an improved offensive flow, showcased the best man-to-man defense we have seen all season, dominated the glass, and just plain out-hustled, out-played, and out-(um..)-not-fouled, on their way to beating the #15 Missouri Tigers.” We need to copyright the phrase “out-not-fouled” (CRFF)

“We have the best fans in the country, and that’s something that pushes us when we go on runs.” – Keiton Page

The rowdy never left Utah State, thanks to @pokelahoma for this link.

I thought this was pretty funny… 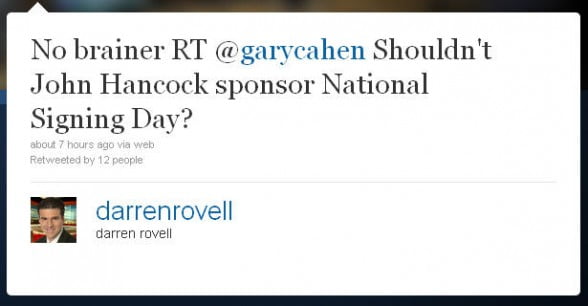 I’m not sure what they showed at halftime of the ESPN2 broadcast last night during the OSU Mizzou game, but ESPN3 had a great story on Kevin Laue, a one-armed center for Manhattan College. The New York Times did a great profile of him two years back, one you should read if you’re having a crappy day.

Nothing else today but check back tomorrow morning for a new “On the Floor” with Q and a Bedlam preview for Saturday.