1. Mike Sherman (not that one) with some interesting takes on the new OC – He makes some strong (and good) points in here, not the least of which is that the longer Gundy takes to hire an OC the more likely it is he hires from within. (News OK)

2. Tony Allen took down the Thunder last night with 27 pts and 5 steals – That led

to this epic quote from Kelly Dwyer at Yahoo, “Is there a more dominant terrible NBA player in this game?” (Ball Don’t Lie)

3. Scout has OSU going 8-4 in football next year – “With the return of QB Brandon Weeden and WR Justin Blackmon, and after a few strong recruiting classes, the Cowboy offense should make a run to be almost as potent as last year. It’ll get one game against Louisiana-Lafayette to tune up for Arizona in what might be a fun shootout, and a trip down the road to Tulsa in a firefight that should produce 100 points. The hope will be for the team to be battle-hardened enough to handle a huge Big 12 opener at Texas A&M before getting a week off. Getting four Big 12 road games in six weeks is bad, and playing at Texas, Missouri, and Texas Tech, not to mention the earlier battle with the Aggies, isn’t fair. While the Oklahoma rivalry is in Stillwater, it’ll be coming off of road trips to Lubbock and Iowa State.” (Scout)

4. Rivals cites Glenn Spencer as one of its top ten Big 12 recruiters of the year – “Oklahoma State made Texas its primary recruiting territory once again and Spencer was leading the charge. With the Cowboys in desperate need of defensive tackles, he landed Ashaad Mabry and then convinced longtime Texas Tech commit James Castleman to switch his pledge late. Spencer was also one of the point men that helped solidify the commitment of Rivals 100 running back Herschel Sims, who had been looking around for quite some time. Landing Army All-American linebacker Ryan Simmons late was just another feather in his cap, as he was the main recruiter for nine Cowboy signees.” (Rivals)

5. Busted water line ruins Boone’s suite – I would imagine there’s a genuine internal debate amongst those in the athletic department over whether getting this fixed should take precedence over the offensive coordinator search. (Tulsa World)

“You’ve got a mature, intelligent quarterback who knows all the plays on Holgorsen’s cocktail napkin and has shown himself smart and savvy enough to deal with the myriad of variations.” – Mike Sherman, Sports Editor of the Oklahoman

A pair of golfers with equally impressive, if not vastly different, accomplishments.

Rickie Fowler nailed an eagle from the fairway at the Phoenix Open last weekend:

Hunter Mahan and his wife painted Toms shoes from scratch. They’ll be up on Ebay today for bid and all the money goes to charity: 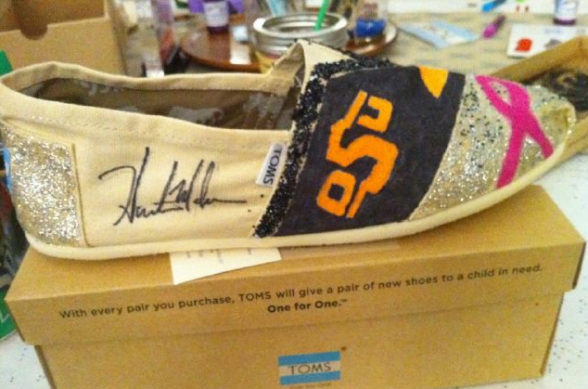 I’m not sure what the tone of this story on Kansas basketball players’ class-checkers is supposed to be, but it comes off as a hilarious (and almost poignant) tale of old meeting new. Rock chalk. And if that’s not enough KU for you, their student section flash mobbed (can that be a verb?) on Monday against Mizzou. Also, in case you missed my tweet yesterday, Jimmermania has reached a new level.

The first part of my look back on the last half-decade of hoops recruits who left early will be up after lunch today. I hope you enjoy it, frustrating as it may be.