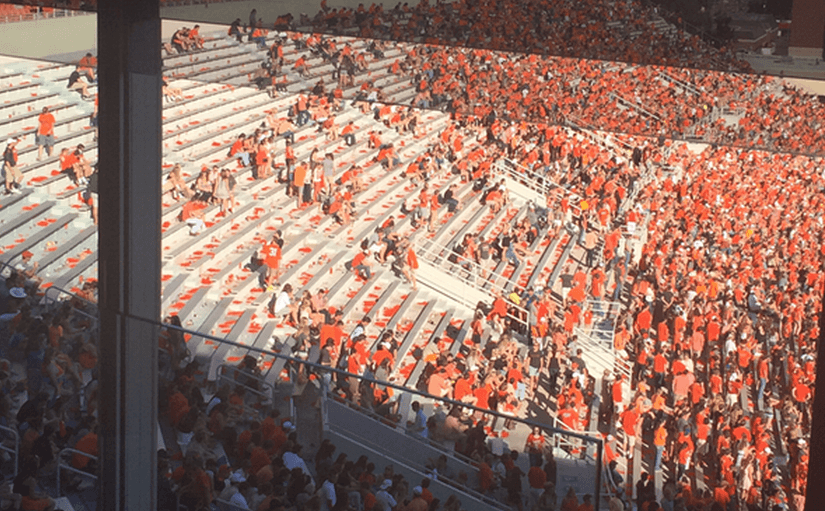 Greeks leaving the OSU Homecoming football game at halftime is as much a tradition as anything we have in Stillwater which is why I was surprised to see the outrage to what I thought was a fairly entrepreneurial idea on Saturday.

#okstate should sell second half tickets to the Homecoming game to fill all the seats left empty by the greeks who leave after 30 minutes.

Underneath that tweet is a string of irrationality that I can’t even begin to dissect. A lot of stuff like this really:

Yeah, okay. This one was even better.

Yes, surely it’s your chicken wire and tissue paper that hauls in all that cash for Payne County and not the fellas throwing the brown ball around on Saturday afternoons.

This is mostly what I saw though.

@pistolsguy you mean all the Greeks that work countless hours to bring in 80,000 extra people to Stillwater for a weekend? They're tired.

I’ve heard a lot of inane arguments from college students but “I’m too tired to participate in a large social gathering where there’s a lot of alcohol and everybody is partying” is one I just can’t buy.

Look, I like Homecoming. I think it’s great — a little bit overrated compared to every other Saturday in Stillwater but still great. I love the walkaround on Friday night and mostly I love the galvanization of the campus it inevitably leads to.

But a freshman philosophy major could debunk the “we were tired so we left one of the six biggest social events in the town halfway before it was over” excuse.

At halftime, of course, all the Homecoming awards are announced for the Greeks at Oklahoma State.

A bunch of 20-year-olds celebrate that their tissue paper was arranged in a manner that appealed more emotively to judges than the tissue paper of their friends and then they leave.

The real reason they leave though isn’t because they’re tired and they have to get home.

No, the real reason they leave is because there are a bunch of Greeks at the game who don’t normally go to football games to begin with just to find out who won all the awards.[1. I should add that my wife was one of these. There’s no problem with that. The problem is with the ridiculous arguments.]

So there — I made the argument against you and your irrationality on Twitter forced me to hand you a defensible rebuttal for yourselves as well because you apparently can’t do it on your own.

Leaving games early is fine, especially for folks who don’t normally come to games, but just own that.

That’s why folks like Matt Fletcher were asking everyone to stay — because he knows a lot of people who don’t know the difference between Daxx Garman and Dak Prescott are sitting on the north side on Homecoming Saturday.

To all #okstate fans: I know it's hot and we're all tired, but please remember both halves of this football game. We need you here to win!

Just don’t feed me this “had to get a nap in after two quarters, THERE’S NO WAY I COULD HAVE SURVIVED THE THIRD QUARTER I WAS ON THE BRINK OF PASSING OUT” silliness.