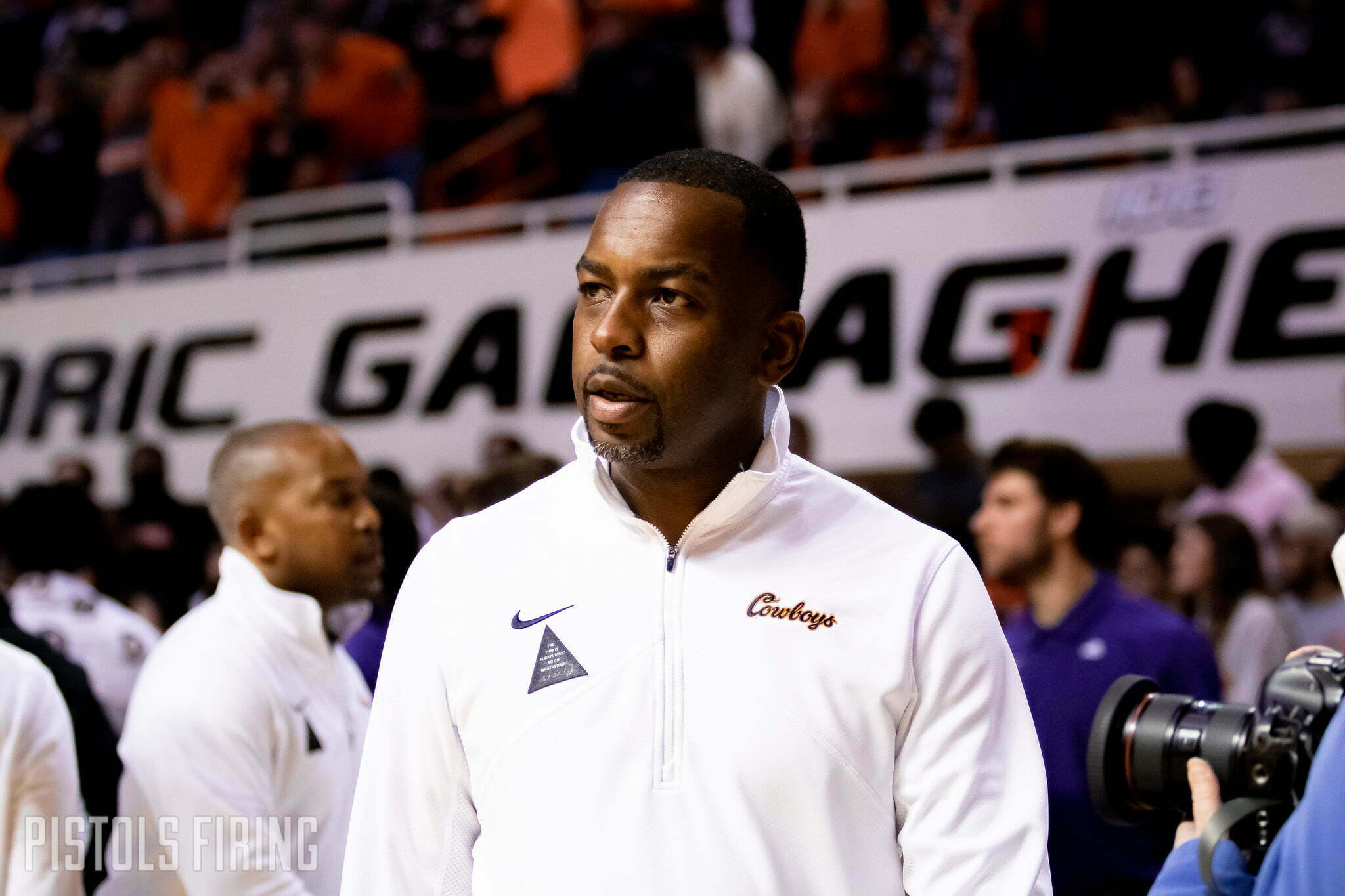 The Cowboys are about three weeks away from exhibition play, and a month from now, they’ll be in The Bahamas already four games into their 2022-23 season.

The Big 12 is hosting its annual Media Days event in Kansas City this week. Oklahoma State coach Mike Boynton took the podium Wednesday morning. Here is what he had to say.

“Welcome, everybody. Excited for another college basketball season. Looking forward to hopefully the next time I’m in this building that I’m actually coaching my team in the conference championships this year as opposed to working as kind of a partner with you guys in the media.

“But I’m excited about this group. We’ve got some experience, probably the most experienced team that I’ve had since my first year. We only have one freshman and several guys who have been in our program for multiple years. The guys have worked really, really hard, like all these teams. And obviously we’re just chomping at the bit to start competing.”

“We’ve been really, really pleased with Moussa’s development overall. He came in as a really kind of a raw athlete. Always was pretty good in terms of instinctively blocking shots. That’s what he brings to the table from a defensive standpoint. But we knew offensively that there were some areas that he could immediately become better at with some time and intention.

“So we’re really focused on just his touch around the basket. We want to raise his field goal shooting percentage on non-dunking shots. And obviously his free throw percentage is an area of improvement as well that we were very intentional about focusing on.

“We feel like if we can make some steps in terms of being able to throw it in the air every four or five possessions and getting a positive result, it will make the game easier for the guys he’s on the court with, like Avery Anderson and Bryce Thompson and Kalib Boone even.

“We’ve looked at lineups with the two of them playing together which we didn’t do very much of last year, understanding that they can be, obviously, really, really impactful defensively because Kalib at one point led the league in blocked shots until Moussa became his teammate.

“You have two really good defensive players who can now play on the offensive end, which will make us a little more dynamic than we’ve been in terms of really having to rely on a ton of 3-point shooting. But again if Moussa gets better like we expect him to and his numbers from an efficiency standpoint on the offensive end improve, that will make us more dangerous with the guys who attack from the perimeter and guys like Avery and Bryce and our two transfers, John-Michael Wright and Caleb Asberry.

“He’s worked really hard on his touch probably to 15 feet. I still don’t know if we’ll see him shoot a bunch of jump shots, but definitely see him working more jump hooks, turnaround jumpers from about 8 feet in.”

On the transfer portal

“I don’t know if I have a thought on general where the transfers is. I’m kind of a guy, this is what it is, right? It’s not changing. It’s not like we’re going to go back to making guys sit out. I even think the whole idea of not having to sit out after [lost audio] get approved every year at a growing rapid rate.

“I lived through that myself. I’m thankful that the transfer portal didn’t exist in 2001 when Eddie Fogler retired after my freshman year in college and Dave Odom replaced him as the coach of South Carolina because at 19 years old I probably would have transferred also. But the thought of sitting out was enough of a deterrent to give me an opportunity to really grow through that moment.

“Because of that, in large part, I’m here today because having to go through those experiences and growing. But I know it’s a different time. We have transfers ourselves. So I don’t want to sit up here and be hypocritical. But we try to be very intentional about the type of kids we bring into our program and helping them understand what our program is about and why they can have success and why our program will have success with them.

“So, I try not to speak in too much kind of big picture generalities because no one really cares what I think. And really try to focus on however whatever the rules are impact our program day to day.”

On other teams not being punished as harshly as Oklahoma State

“I’ll say this: I hope that it’s a sign that we’re kind of getting away from the old kind of outdated thought process of just pick on whoever you can at the moment. It was a really, really difficult season for our team to go through last year with that already on the forefront before we ever played a game, no question about it.

“I don’t want to see a bunch of other kids have to go through that either. And so while I’m disappointed that what it looks like our program will be the last one to have to do that. I’m also — I guess I’m happy for the future kids that won’t have to suffer that same fate because of things they really had nothing to do with.

“So it sucks to kind of now be a footnote in history. We’ll probably be a trivia question: Who is the last team to suffer a postseason ban over a recruiting violation? Will probably be the 2021-22 Oklahoma State men’s basketball team.

“But at the same time, maybe our case made some people step back and think this is kind of ridiculous. This is a little egregious, and it’s really wholly unfair to the kids who are now in the program.

“Some of the cases that have gone forward now that haven’t had a penalty, I don’t want to necessarily see them punished. I’m just disappointed that we, unfortunately, will probably have been the last one to have that happen to.”

“I’ve known Bryce for a long time. Obviously he grew up in Oklahoma. I got a chance to recruit him out of high school. And he made a different decision. But I’ve watched Bryce regain some confidence that was lost between the time he showed up on our campus last year and now. He’s made some great strides. He seems to be enjoying the game and the time he has with his teammates again and playing with a lot of confidence.

“So he is certainly somebody that we’re going to look to to lead us from a scoring standpoint. He and Avery Anderson will probably be our two kind of spearheads in the back court there. So he’s going to do, hopefully, what he was expected to do out of high school, which is be an impact player in the best conference in America.”

On Bedlam potentially ending in basketball

“I don’t know if I’ve gotten — obviously I’ve heard this from a football standpoint. I’m not sure that that decision’s been made in basketball. I don’t want to speak to it until that happens. We’ll see.

“Obviously we’ve enjoyed the opportunity to compete against them over the time in my time as head coach. I’ve got great respect for Porter and the job he’s doing to continue to keep that program relevant.

“In terms of the question, I don’t know that I can answer. I’m not sure that decision has been made in our sport specifically. I know it’s probably been made in football at this point.”