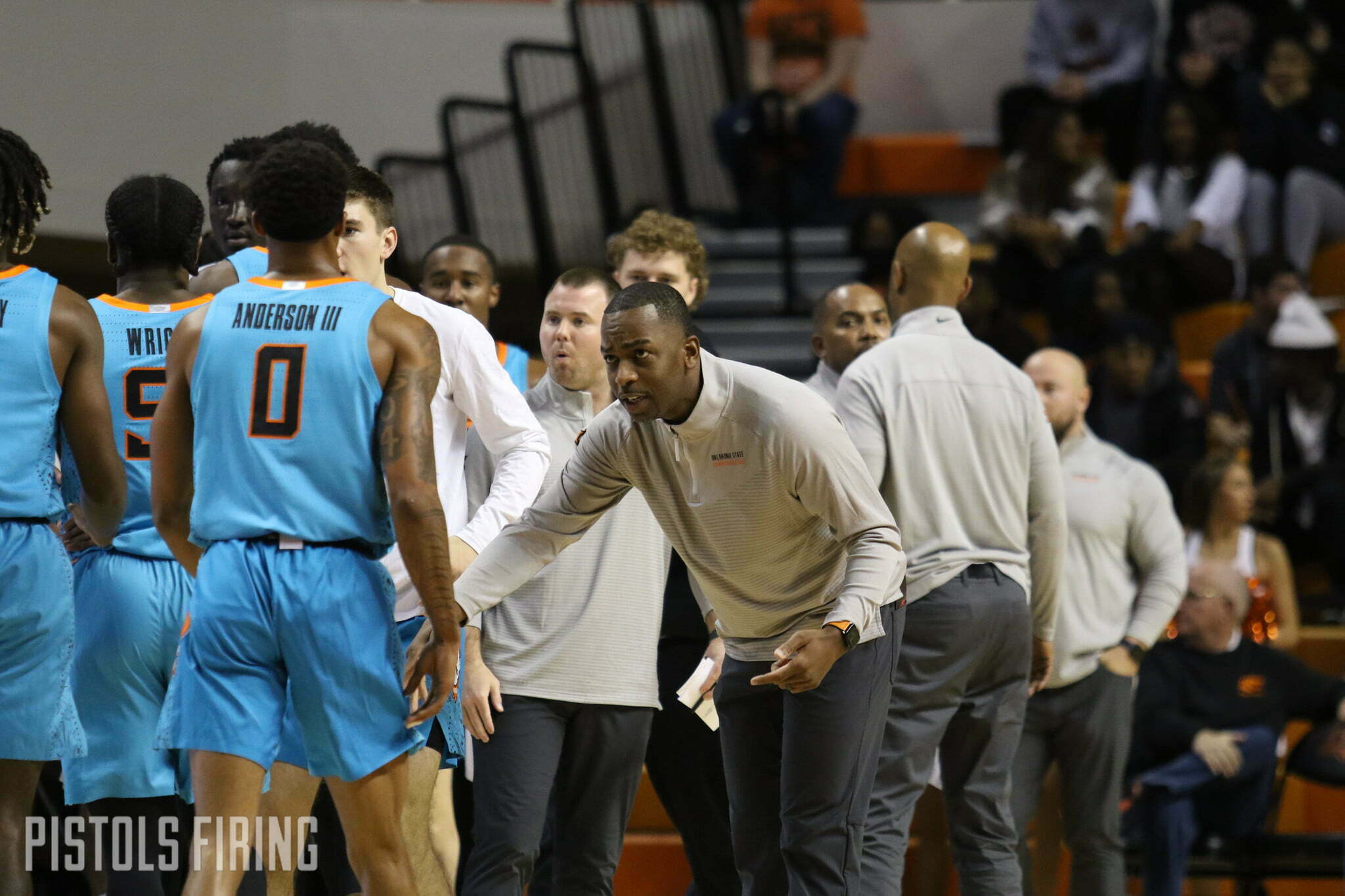 STILLWATER — After some early season struggles, Mike Boynton’s Cowboys have won their past three games.

Oklahoma State beat Prairie View A&M 78-53 on Sunday in Gallagher-Iba Arena. Here is everything Boynton said after the game.

“Just thrilled to come out with a win. Obviously taking care of business in a game, but we obviously didn’t play great in the first half. In the second half guys tightened up, played much better, starting with our defense. I thought Quion Williams was terrific in terms of setting the tone again by losing himself within the game and making an impact without having to necessarily score. With that being said, there’s a lot of improvement that needs to be made. This is what the non-conference is supposed to do, give you some different challenges. So, looking forward to moving forward.”

On going with Quion Williams to start the second half

“There was no hot hand in the first half. So no, he earned it. He deserved to be out there. He was making the types of plays that gave us a chance to have success. At the end of the day, that’s what it’s all about.”

“Yeah, I’ve seen him kind of start just playing free. Again, we talked about a little bit of it Friday, it’s hard as a freshman, because this is a hard deal to do. And we don’t have anybody to feel sorry for you. You can kind of get lonely, but he’s tough. You know, he’s got a little bit of enough resilience to overcome some struggles. He’s fearless enough, because he doesn’t know that he’s supposed to be worried. And because of that he’s been able to impact our guys and gain the respect of his teammates, more importantly.”

“Yeah, to be honest, this is what I saw from him when I recruited him. And obviously watching him do it as a high school junior and senior, he was much more comfortable in that environment with those teammates to just play kind of that style. And then you get here and now terminology changes and you feel like, ‘I got to do everything that the coach is telling me, and my feet has to be in this position, my hand has to be in this position, and I have to say these specific words.’ Some of it’s true, but not all of it. Sometimes you got to let go of the technicalities, and just go be a ballplayer. The game doesn’t change that much. There are more talented people out there, there’s more strategy involved, but by nature of his hustle and his effort, he can have an impact the way did today.”

“It’s a part of the process. Today, I thought we lacked energy, which is never something you want to admit as a coach. I thought we were ready to play. It wasn’t about being ready to play, but I thought that [Prairie View A&M] played more inspired than we did to start.

“Quion changed the climate of that when he came in. He made some things happen for us, and he really wasn’t afraid to voice that with his teammates. That’s the other thing about him, he’s not afraid to speak up when he feels like things should be better. I asked them nicely if they would play better the second half, and they did.”

“Similar to Quion’s role, Quion’s probably a little bit more naturally basketball player, but Tyreek has got a recklessness about him, as well. It sometimes makes it uncomfortable for other people to be in the paint with him. I think he dunked that ball with three guys going for the rebound. Just understanding he can bring a physical presence to us, it’s something that we need — we’ll need as we move forward in league play, we’ll need Thursday when we go play a Big East team that’s probably going to be in the Top 10 by the time we get there. His role is really, really important for us trying to become a good team this season.”

On his halftime speech

“It’s Sunday, so I’m gonna have to go back to church again. I’m going to call my grandmother because she watches every game and she lets me know when I say bad words. I’m gonna have to tell her because I know she didn’t see it on the court, but it was Sunday and I should probably not say some of the things I said at halftime. But our team needed it, and my job is to make sure that we give ourselves the best chance to win. So whatever the message is that’s necessary, that’s the one that I’ll try to deliver.”

On how Kalib Boone avoids his “off-games”

“That’s a great question, man. I feel bad as a guy who’s coached him for four years that I can’t give you a great like articulate, highly-sophisticated answer. The truth is, he’s got to just go play. We shouldn’t have these conversations anymore, to be honest. He needs to be a guy that we send him out there, we know what we can expect. But for a game where we come in and we talk about how good they were rebounding the ball, they beat Washington State, this team did. They out-rebounded them. I think they had out-rebounded every one of their opponents up until today. They just beat an Arkansas State team on the road just a few days ago. And all we talked about for the last day and a half was, rebounding is the most important thing we do. And to come in at halftime and be down on the glass, having given up eight offensive rebounds, and I looked up at the stat sheet and he doesn’t have one? That’s unacceptable. He’s better than that, which is why I expect more. I tell him this all the time, I expect more from him, because I expect more for him. Like he deserves more than he’s allowing himself to have right now. And until he figures it out, it’s going to be coming upon me to keep reminding him that.”

“He’s not even the same player [he was last year]. It’s not even close. A year ago today, he was an emotional rollercoaster at all times. He still plays with great passion, but he’s less emotionally driven and he’s more tactical about what he’s supposed to do. He’s very good in ball screen coverages. We haven’t shown it, but we can switch with him a little bit when we need to. And obviously when you get in the paint, people are looking around to see where he is. He’s having an effect even when he’s not blocking shots. Teams aren’t taking as many layups because he’s in there. We gotta continue to just build his confidence on the offensive end, which he’s getting better there as well. And the free-throw line is obviously the most glaring thing that he’s gotta address.”

On Avery Anderson shooting better from the free-throw line

“We didn’t shoot them great today. But, yeah, that’s his job. He’s a point guard. He’s supposed to make free throws. You’re supposed to make all of them. So, 90%, am I asking for a lot? Yeah. But as a senior point guard, when you get fouled, I expect you to go up there and make them all. He’s got the ball in his hands, and he’s the type of guys that’s gonna be in those situations late game when teams are fouling. I gotta have no worries that if he gets fouled, whether we’re going to be able to convert. Which again, I go back to the Southern Illinois game, that’s what was so frustrating, is that we had opportunities to close that game out at the line and didn’t do it.”

On the defensive performance

“Yeah, I mean, I think we have an elite defensive team. I haven’t watched everybody. I’ve watched probably 70 teams play college basketball already this season in a little over three weeks. And I haven’t seen a whole lot of teams that I would say, ‘Man, we got long way to go to catch those guys defensively.’ For us, it’s just taking care of basketball, it’s offensive efficiency, it’s being more consistent from the 3-point line. And again, [Quion Williams], he doesn’t know as much as he’s gonna know, but losing himself or playing with less worry about making mistakes will help him tremendously this year.”

“I think so. I mean, it’s been a process. We’ve been a much more pressure, extend defensively, probably the last five years. We’ve had a great length. We can get out there and really bother people. This year, we’re a little bit smaller in the backcourt. And so what we tell those guys now is to contain a little bit more, but we want to funnel them into Kalib (Boone) and Moussa (Cisse) and Tyreek (Smith) where those shots are difficult to make. And I think for the most part, those guys are doing that, I think. So that means if they shot eight today, I think it was four the other night. So 12 in two games, that’ll give you a shot to win a lot of ball games if teams don’t shoot free throws against you.”

“We switch a lot more than we have. I still would like to have a guy, and I think Quion is going to become that for us. I think that’s a role that’s available still for him. It’s one that he’s capable of doing. He does have a good body. Tyreek is another one. He can guard guards because he can move his feet well, has got an obviously crazy body. Still would like to have a guy that you just say, ‘Hey, you have that guy tonight and we’re not switching him.’ Eventually we’ll figure that part out.”