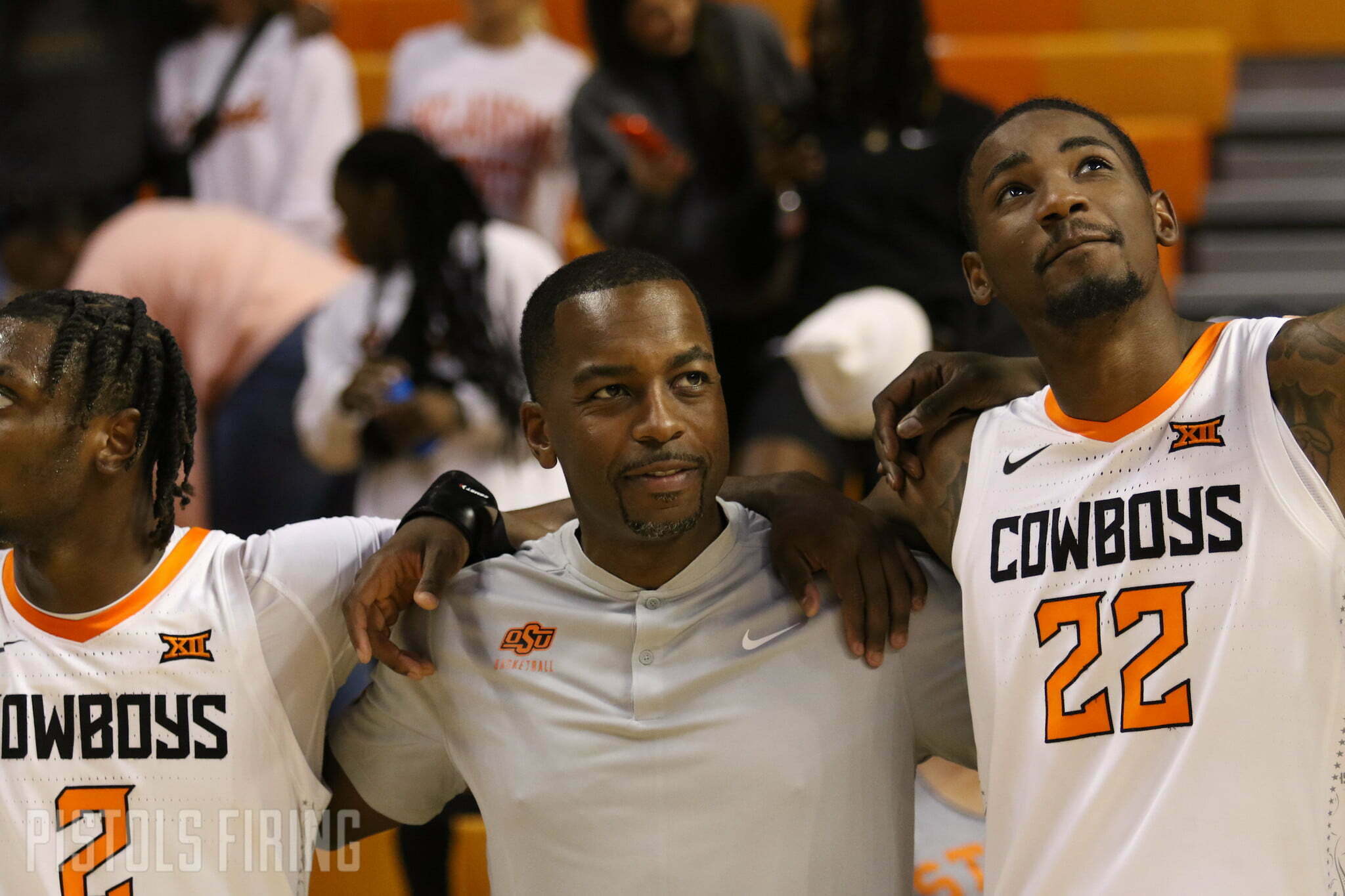 STILLWATER — Mike Boynton’s Cowboys dominated like they should have Thursday night against Ouachita Baptist.

Oklahoma State won 85-51 in exhibition play. After the game, OSU coach Mike Boynton met with reporters to recap the game. Here is what he said.

“Just want to open up and first of all thank Ouachita (Baptist) for coming down. This is obviously part of our season prep. I’ve known coach (Dennis) Knutt for about 15 years. We worked together at Coastal Carolina back in the early part of my assistant coaching career, and always respected him as a person. He was a great player at TCU. His family’s got ties here. His dad played for Mr. (Henry) Iba. And two of his brothers also attended school here, one played football, one played basketball. So, they’ve got strong ties to the school and I was thankful. The kids went out there and played hard. But obviously I was proud of the way we dominated the game from the interior the way we did, because that was a lot of the plan.”

“I don’t know, I mean, I thought we got really good shots. I thought we got the good shots from the right people. Bryce (Thompson) made his first two, and sometimes that happens, right? He didn’t stay in a good rhythm. Probably didn’t get another one for awhile, so he wound up 2-for-6. Not a terrible night shooting, but you’d like it to be 3-for-6 or 4-for-6.

“(Caleb) Asberry, first game out there, I think he’s going to have more nights where he’s 2-for-4 than 0-for-4. More concern was just our free throws. I thought our focus at the free-throw line was lacking. And then obviously I thought we turned the ball over carelessly. It’s not like we got forced into a bunch of turnovers. Some of that is first time out there in front of people and some new guys playing together under the lights. And those things happen. But those are certainly things that we’re going to address in practice the next few days.”

On Caleb Asberry and his defensive play

“Yeah, again, he’s the type of guy that’s going to impact the game, regardless of whether he’s making shots or not. And that’s what you need. You need guys who understand that there’s more to the game than scoring. It’s one of the things we identify when we recruited him that he’s been coached by some really good coaches, Billy Gillispie at Ranger College, Danny Casper, who we replaced at Stephen F. Austin, when he recruited him to Texas State, and then [Terrence Johnson], whose there now, all really good, defensive minded coaches. So he’s got some really good intangibles to start with, and knows he can impact the game without having to make baskets, but obviously that’s something we wanted him to be able to do. I think he showed that he’s more than just a shooter, now. He’s a good athlete at getting in the lane to finish. I’m confident that he’ll be in the gym and we’ll get the shot going as well.”

On Kalib Boone and Moussa Cisse playing together for extended minutes

“Again, everything right now is kind of a trial. You know, there’s something to doing something against somebody else with officials, with people in the stands that you just can’t simulate in even a closed scrimmage. Certainly not in practice, but I thought they handled it well. Now, one of the keys for them is continuing to figure out how to stay out of each other’s way, while also complementing each other, which isn’t always as easy as it sounds, but I thought they did that effectively today. I thought Moussa was just absolutely dominant, the way I would have hoped he would have been able to be, but more than just scoring, rebounding and protecting the rim.”

“Yeah, I think he just kind of maybe strained a muscle in his shoulder or something. I don’t think it was anything major. I haven’t gotten a report back, but he looked to be in good spirits in the locker room.”

“It was good. It’s been a long journey for the kid. You gotta remember, prior to playing in [Cade Cunningham’s college debut], he was injured going into that season because he got hurt his freshman year midway through conference play. So, it’s been really more than two years since he’s been out there. Now, this wasn’t a regular season game, so there’s a different kind of feel, but it was good to see him out there, and he seemed to be comfortable and confident on his leg and just playing the game normally.”

On Gonzaga potential joining the Big 12

“So I haven’t heard anything official. Obviously, I pay attention, so I saw those reports. No one ever asks me except you guys. I won’t have a say in what happens. I have a lot of respect for their program. Obviously they’ve been one of the preeminent programs nationally for some time now. If it happens, it’ll be another challenge in what’s already a strong league. I wonder who’s next? Is it the Utah Jazz or the New Orleans Pelicans?”

“Woody is an interesting study in a sense that it’s never been about ability. Woody’s just got to immerse himself in and then allow the results to take care of themselves. He’s got tremendous ability. If you’re talking about something that could be a difference in our team being multi-weekend team, right in March, he could very well be it, because he has a unique skill set at his size to be a versatile switching defender. And obviously he has the ability — the only shot he missed was one and he didn’t really shoot to make, the one at the end and a half. The play was ran for him, but he just kind of just chucked it up there. He made them all. I liked that he rebounded the ball, because it’s something that this team is going to need, because Moussa (Cisse) is not going to give 17 every game and [Kalib Boone] has got to get more than three. But I think Woody can certainly be a factor in there for us.”