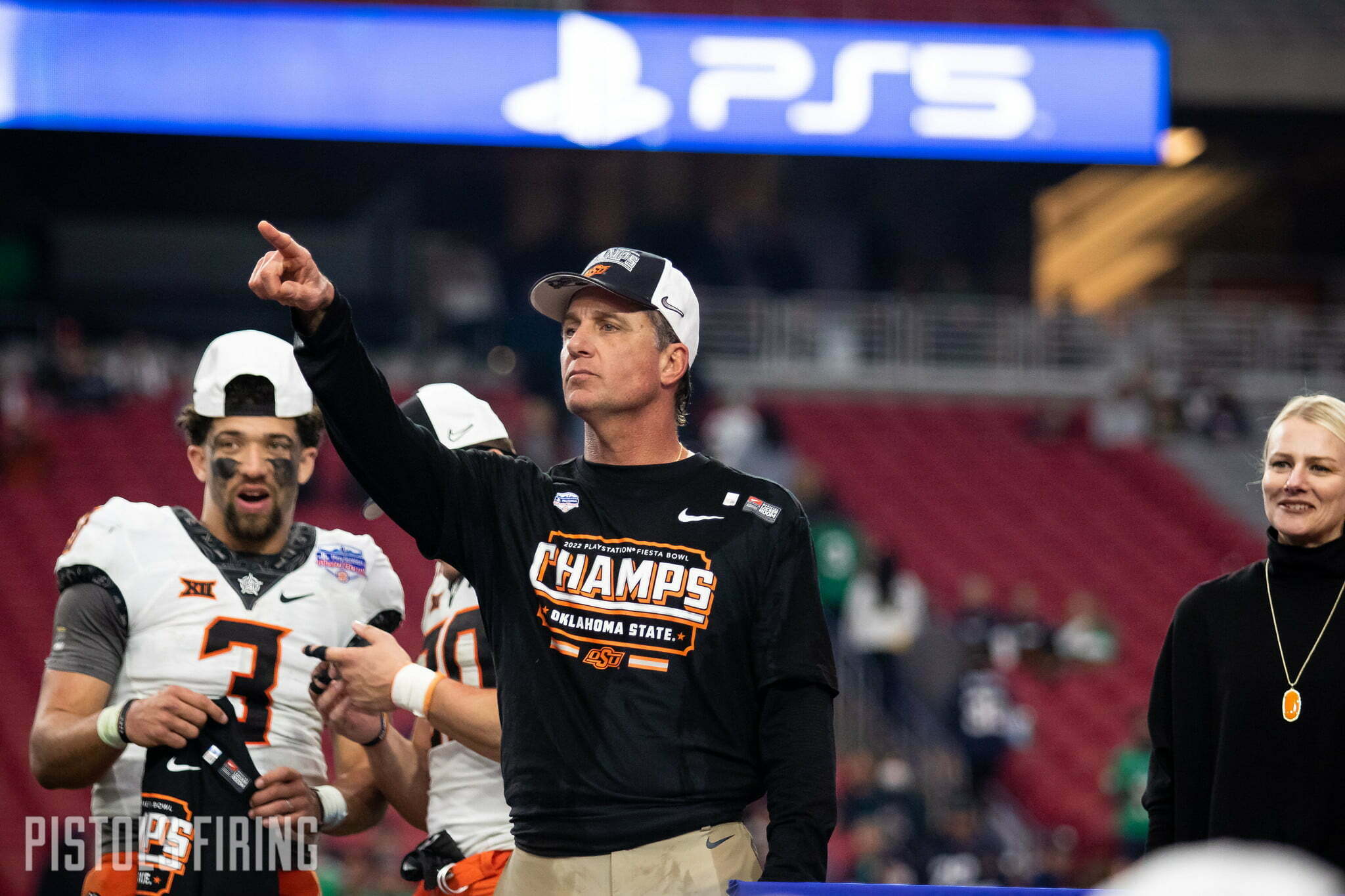 GLENDALE, Arizona — The Cowboys are Fiesta Bowl champions for the third time in program history.

Oklahoma State defeated Notre Dame 37-35 on Saturday in State Farm Stadium. Here is what Mike Gundy had to say after the game.

“So we picked a good day to have our best day on offense. Very proud of our guys. Quarterback (Spencer Sanders) was fantastic, obviously; over 500 yards of offense himself. And defense, kind of settled in on what to do. We went through some growing pains in the first quarter and a half defensively, trying to get things adjusted and communication. I was a little concerned about that. It showed its ugly head a little bit. Then we settled down, made good halftime adjustments. Obviously, played very well.

“The key to this game was Rob Glass, our strength staff, our conditioning. Our ability to play fast. In my opinion, we fatigued them and they never could play catch-up. We struggled early in the game with them. My concerns going into the game was their length on their offense and defensive line; their ability to get their arms extended on us. They’re longer than we are on both sides of the ball. So we had to play fast and try to wear them down, which we did. And the coaches made fantastic adjustments at halftime.

“We challenged the team at halftime, that anybody that didn’t want to come back out and fight play by play, he can stay in the locker room. And they came out and they fought, competed, and couldn’t be any more proud of them.

“I was confident that our players would compete. Again, I go back to my concern was the length they had up front on both sides of the ball. We struggled in the first half with that. We went two minutes and scored right at the end of the first half, which gave me a little more confidence. So obviously, that told us to do that. But these guys are mature. They’re veterans. They’ve been in this program, most of them — particularly on defense — been in the program four, five, six years. For that reason, I didn’t have any concerns. I was just hoping that we could hold up with the length they had on both sides of the ball up front.”

“Well, I’m very proud of everybody that’s been involved. I’ll be honest with you, it was a lot of hard work. We’ve got good people in place, and I’ve said this a number of times. We’ve got a chance to move forward at Oklahoma State in football. I’m hoping we get a 100% commitment in all areas and we can try to take this thing to the next level. Today’s win gives us that opportunity. And honestly, we came in and went toe-to-toe. Two good teams playing today. They’re fifth in the country. But as we talked about in media for the last three weeks, we were playing Notre Dame. Everybody knows who Notre Dame is. And our guys stepped up and met the challenge.

“We struggled in the first quarter, to be honest with you, more than I thought we would have. We just had some — it wasn’t communication. I just didn’t think we were on track. Now, I will say this. I thought that Notre Dame had a really good 15-play starter list that they executed to perfection. So I’m not going to completely disregard their ability to game-plan and call plays, because they had a good concept, several good concepts. They caught us in some things that we can be caught in at times. But once we kind of settled in, we had several guys involved in play-calling. They were helping each other, which I want them to help each other. I’m going to say that I made the right call in doing it that way, because I heard communication on the headsets before the defenses were called. And that’s what I wanted. I wanted everybody to be involved, from the standpoint that we hadn’t had anybody on our defensive staff that’s called plays in a game. And calling plays in a game is not easy. I know that for a fact. So they worked together as a group. They had great practices the last three weeks. And once they settled in, I thought they were really good.”

On why Spencer Sanders played better when they upped the tempo

“Well, they weren’t able to use their up-front advantage. They were bigger and longer than us on both sides of the ball, on offensive and defensive line. When we played fast, they didn’t get to sink their cleats in the ground and they didn’t get to use that length. So it gave him more time to throw the ball and allowed him to make quick decisions, when at times they were struggling to get lined up. That made him a better football player.”

On the changes they made defensively at halftime

“So we started going to some more zone, where we rolled up corners out on the perimeter. And then we went back to some of the base man stuff that we used all year and had success with. So essentially, we tried to offset some of their free access in the flat on quick, easy throws. And then as the game went on in the second half, we went back to what we’re good at. And the biggest play of the game, not just because he’s sitting here, is the sack that Brock Martin had, and then after that, they threw the interception. Forced them into a down-the-field throwing situation. And obviously Malcolm [Rodriguez] was Malcolm. But before that, Brock got a sack. We weren’t able to get many sacks or put a lot of pressure on him because of their length, as I’ve said now three times. So we had to find other ways to play good defense, and they did a good job of mixing up some of those calls in the second half.”

“You always want your players that are competing their last season and their last game to have success. These guys are warriors. This is a violent, physical game. Their bodies are beat up. They can feel everything at night when they go to sleep, and they feel it again when they wake up in the morning. So for them to be willing to put their bodies on the line for our culture, for our organization, and then have success, makes it all worth it.”

On OSU’s final drive of the first half

“My feeling was that we needed to do something to create momentum. And I’ll be real honest with you, I didn’t have much confidence in us going down and scoring in four plays. And my concern was taking a sack, because we hadn’t protected very good up to that point; or Spencer [Sanders] not being patient and firing the ball into coverage and trying to make a play. Quarterbacks do that when they get impatient. But he did a great job of understanding it’s one play at a time. But all three of the things that you just mentioned, was I concerned about? 100% I was concerned about all three of them.”

“A week ago, somebody sent me an article that came out online on momentum. I don’t know where it came from. And I opened it up and I read it. It’s interesting; it talked about whether momentum actually factors into sports contests or not. They’ve done a lot of science research behind and it’s debatable on both sides. Us driving down and scoring in a minute, in four or five plays there at the end of the first half, gave us hope. And it allowed me as a coach to come in the locker room and say, ‘Look, we drove the ball down a drive before, and Tay Martin dropped two easy catches. And for that reason, we didn’t score — or we would have scored a touchdown, in my opinion. So we moved the ball down the field three times, but we can only show it twice because we dropped easy passes.’

“I made sure he knew, ‘Understand, look, you’re going to get other options. Just play the next play,’ which he did. But that also gave us a chance as coaches to be able to say, ‘Look, guys, we’re fine. Let’s find a way to minimize the big plays and let’s play fast and let’s see if we can get them fatigued.’”

On Spencer Sanders’ performance after struggling in the Big 12 Championship

“Well, there’s no question, and my heart broke for him when he fumbled at the end of the game. I just didn’t want that to end for him that way, because of the game he had played, and he didn’t play his best game in a championship game. And I’m going to go back and say what I said after that. We didn’t protect him very well and we didn’t run the ball very well. But he still made some errant throws and he was fantastic today as a competitor. And I hated that for him when he dropped the ball. But for our defense to rally and get a stop, and then for them to go on-side and kick it to [Jason Taylor], which obviously is the worst guy you could kick it to, it was perfect for us. We were able to seal the win. What you said is exactly right. I’m very proud of his competitive nature, and I’m very proud of his willingness to give up his body and compete and play the game at the highest level.”

“I do want to say one thing before I get off. I said this a month ago and I’ll say it again: This is an unbelievable bowl game. The PlayStation Fiesta Bowl is first-class. Everything involved is first-class. The lodging, the facilities, the game day atmosphere, the way we’re treated — there’s just not many places like this. I also want to say Notre Dame is first class. Their players were first class. I think they hired a fantastic young coach (Marcus Freeman). I had a chance to visit with him total for maybe 15 minutes over a couple of days. What a first-class person. Going to be a really good young coach. And Notre Dame made a good decision, in my opinion. So this is a once-in-a-lifetime event for everybody involved. Couldn’t be any more thankful for the PlayStation Fiesta Bowl and the way we’ve been treated. And I couldn’t be any more thankful for the Oklahoma State fans that followed us to Phoenix.”