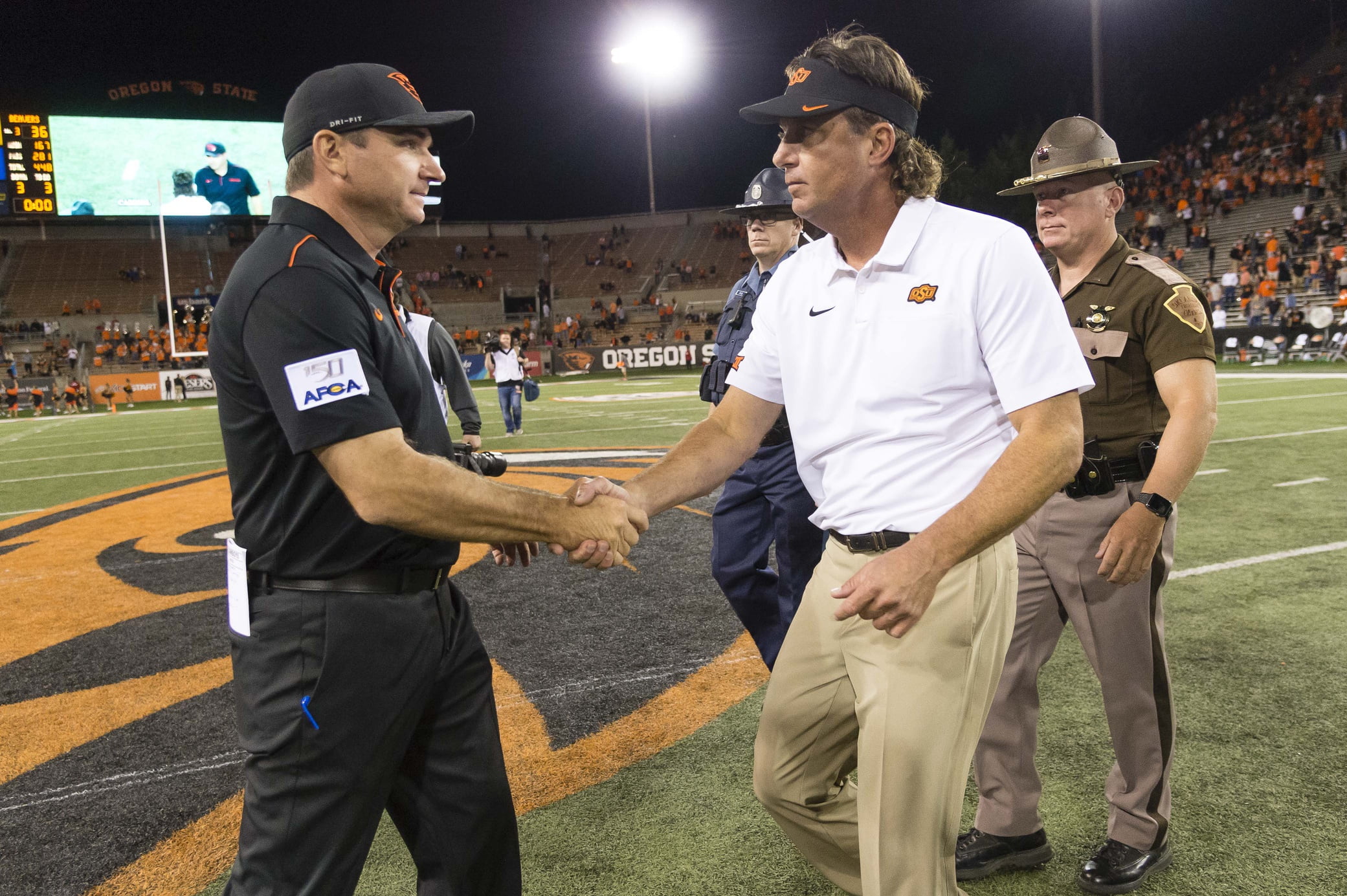 After Oklahoma State’s 52-36 victory against Oregon State in Corvallis, Gundy answered even more questions in his postgame news conference. Here is what he said.

• He told the team he was proud of its focus. He mentions Corvallis isn’t an easy place to get to to play. He said the team had an hour and 35 minute drive getting to the stadium.

• The Cowboys were able to play disciplined. He thought they tackled well for the first game, and they took care of the football.

• “Thought Spencer played well for his first time out. He was very effective.”

• His team gave Oregon State too many opportunities on third and long. He added they had issues with it last year and again tonight.

• On playing Sanders: “Well, we made that decision a few days ago … to go ahead and put him in and see how he executed, and once he started playing good, we just rode that wave.”

• “I thought he handled the game really well. I didn’t ever think he was flustered. I thought his demeanor was good. I thought he rushed the ball well. Seemed like he understood the throwing game for the most part. So for the first time out, I thought he played pretty well.”

• “It didn’t surprise me. I don’t think that we had any idea what he would do, but I didn’t necessarily think it surprised me. I think he handled the game well. Being a good quarterback in our offense, and probably for most of the teams at this level, is being able to handle the game and not get flustered. He was in control of the game pretty well.”

• He has to watch the tape for defense, but it seemed like Malcolm Rodriguez tackled well in his first game at linebacker.

• On #ElevatorGate: “They were all stuck in the elevator. It was Earth to Houston, Houston to Earth. There was nobody up there.”

• He said Kasey Dunn called the plays on the first series out of the half with the upstairs staff stuck in the elevator.

• “It got started fast. Offensively, obviously Dunn’s been here with me for nine or 10 years, so he just called the plays. The way that we do it, I didn’t even know there wasn’t anybody up there. Then defensively when we got ready to kick off, they said, ‘Now you know there’s not any coaches in the box,’ and I said, ‘I didn’t know that. Nobody told me.'”

• Oregon State coach Jonathan Smith agreed to halt the game until the coaches were freed.

• He was happy with the offensive line’s performance.

• He didn’t notice anything different in Sean Gleeson’s first game. He said the difference is the team’s personnel.

• Oregon State left its safeties way back, so it made sense to run the ball as much as they did.

• The team was better with its discipline. He said his team has a long way to go, but it’s better.

• He said Tylan Wallace and Chuba Hubbard making plays “without a doubt” helped Sanders settle in. “They need some reassurance that they don’t have to do it all on their own.”

• On starting Sanders over Brown: “We’ve been watching practice every day. In about the middle of last week, we felt like he gave us the best chance to win this game. That’s what it came down to.”

• When asked if Sanders will continue to start, Gundy jokes, “Do you want me to make a change now?”

• “I say that sarcastically, kind of, but not really. I felt bad toward the end that Dru didn’t get in. Spencer was playing so good, we couldn’t take him out. (Dru) has done very well. He’s gonna get on the field. At the end (of the Oregon State game), it doesn’t count. His attitude’s been good, and I told him if he doesn’t want to go in at the end of the game, I understand. But he wanted in. They’ve done well, and it’s not easy for him to swallow. He’s got pride. He’s a competitive young man. The other guy was playing good. We just couldn’t take him out.”