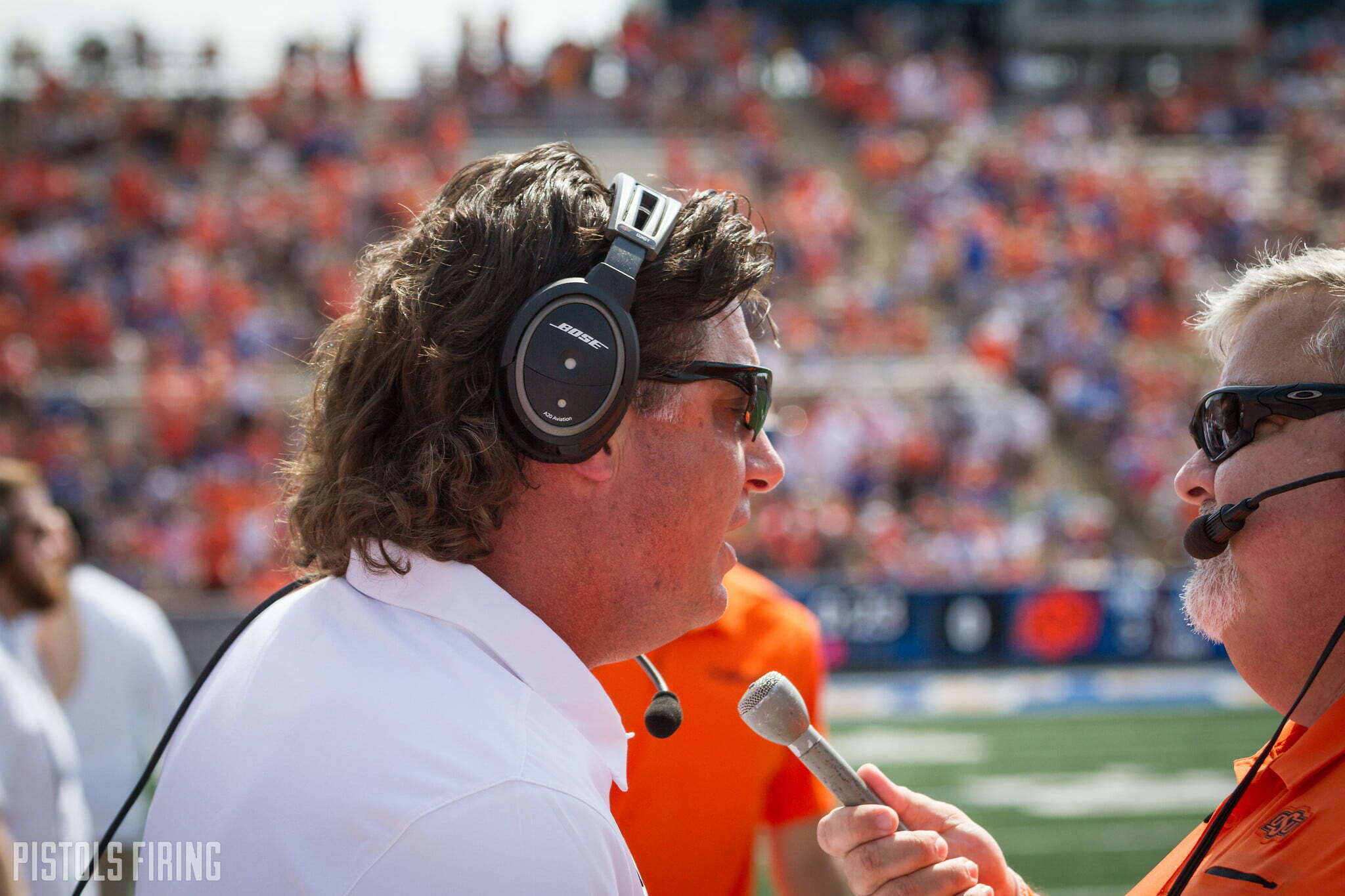 Oklahoma State travels to Austin this weekend to open its conference slate against No. 12 Texas. Mike Gundy held his weekly media luncheon Monday to discuss a road game that he has won five consecutive times and how his team is progressing. Here are bullet points on what all OSU’s coach said.

• Everyone knows who Texas is.

• Sam Ehlinger is “considerably better than he has been.”

• “Just from what they’ve done this year, they have changed, in my opinion. They’re throwing the ball much more than they ever have been. Traditionally when they came in the league a few years ago with Coach (Herman), they were rushing the ball, more of a power team. I don’t see that now.”

• “I see (Ehlinger) as a better throwing quarterback.”

• Ehlinger’s experience helps with that.

• On having to come from behind against Tulsa: “If you battle back, you should be a little bit better team.”

• On Texas: “They’re still all big, strong, fast and can run. They’re all four and five star players. The difference is Ehlinger, in my opinion, is more comfortable and is playing well and is throwing the ball really accurate.”

• Gundy said it’s the same for his team each week whether it’s a big game or small one when asked about his win streak in Austin.

• On if he expects Devin Harper to play against Texas: “I hope so.”

• “I’ve said it every year, people talk about one conference or the other. In my opinion, you have six or seven teams a year that have an extremely high talent level that have a lot of money in the organization and their athletic department, and they kind of work in a different area. And the difference now is you can take the seven or eight, nine teams through about 50, throw them all together and anybody can win the game.”

• It’s common for competitive athletes to get frustrated as Spencer Sanders did Saturday. He said Mason Rudolph and Josh Fields did the same thing.

• “Spencer’s game hasn’t slowed down yet, and it won’t for another 10 games in my opinion. … It should start slowing down for him about this time next year.”

• “Supporting cast is huge for a young quarterback.”

• Golden story about Gundy going to Nebraska as a young quarterback: “When we went to Lincoln, I think it was 10 degrees and sleet and ice. Those guys up there that were on some really good, natural supplements. When I came up to the line, I’ll never forget, you remember they used to wear those jerseys with the big holes in them back in the day? And they were half shirts, and I was like the guy on A Christmas Story (with a lot of layers on) because I was cold. I was only 165 (pounds). I walked up, and the defensive line, they didn’t even have undershirts on. They had just their pads and their jerseys. I remember that clearly.

• Gundy said he got through those times because he was surrounded by great players, and he just did what they told him. “I knew they took the guy out in front of me for throwing interceptions, so I knew no to throw an interception.”

• The offensive line was between its Oregon State performance (good) and McNeese (average) against Tulsa.

• “I think we gave it to (Chuba Hubbard) 32 times Saturday, would prefer not to do that again. But if we have to, we will. He wants the ball.”

• He won’t know much on injuries until Tuesday. OSU didn’t have any injuries against Tulsa.

• That number is more than Justice Hill’s number last season because of their bodies. “One guy is 185, and one guy’s 210.”

• Tyler Lacy has done much better. He was the team’s defensive player of the game against Tulsa.

• He didn’t see Mason Rudolph play yesterday, but he talked to him. He said Rudolph was excited.

• Gundy thinks Rudolph will be successful.

• Hubbard is “very serious” about football.

• “LD (Brown) needs to run. He’s chopping his feet, looking around, he needs to run. That’s his strength. He’s fast. He’s not as comfortable, in my opinion, as what Chuba is right now. … He should be preforming better than he is, and I think he will. He’s just a little unsure right now. We need him to stick his foot in the ground and go north.”

• Defense determines where OSU’s offense goes with the ball. That was how Tylan Wallace got so many targets.

• On Dezmon Jackson: “Hopefully he’ll be out there this week.”

• On previously blowing leads against Texas: “Some of those leads we had were against Vince Young, and in the second half, he turned into Superman.”

• Someone told him this morning that his team has the country’s leading rusher and receiver.

• Sanders didn’t run as much in the first half because of the way Tulsa defended.

• On the five-game win streak in Austin: “We’re proud of that. We all know this, there’s certain programs that you look across the country and people recognize the name, and that’s one of them. That’s a great accomplishment for the organization and the guys that were here before and that we can compete with teams that essentially get their pick in recruiting and fluctuate on an annual budget of $235 million. It’s good for us, but we don’t see them as any different than anybody else. We have respect for them just like we do other teams we play.”

• Gundy doesn’t know why they played better on the road in recent years than at home.

• He expects to have air conditioning in the locker room against Texas.

• Texas never called Gundy when looking for a head coach. He doesn’t know if UT ever called anyone representing him.

• OSU will do the same thing in practice despite the jump in level of opponent.

• On horns down: “We’re not into all that. I’d rather just score touchdowns and celebrate together.”

• Gundy said he imagines the players get more excited for this game than the first three.

• Calvin Bundage status is the same as it has been. “He could come back in 10 days and be full speed, that’s what I’ve been told. Or maybe a month. I’m not sure.”

• He didn’t get to the bottom of the unsportsmanlike penalties against Tulsa: “I wasn’t able to find it on tape. Both of them happened about 45 minutes after the play, so I couldn’t find them on tape to find out evidence of who was guilty.”

• He’s unsure if the Texans on his team are more fired up for this game.

• He held up a 0 with his hands when asked how many of his guys Texas recruited.

• On if he was motivated to play OU as a player: “I guess. That’s been so long ago. I like to play every game. If you and I went over here and pitched pennies on that wall, I didn’t want you to win.”

• Sean Gleeson seems to be further along than other guys Gundy has had. Gundy said it hasn’t phased Gleeson much. “I will say this, I think Sean was more mesmerized by the police escort for the buses. He thought that was pretty cool because I think where he had been, he was actually driving the bus with the players there.”

• Gleeson is calm on game day.

• Gundy can tell if a playcaller is calm by listening on the headphones. “The guys that have coached here before and called plays here, there’s not enough machines to push beepers.”

• They let Sanders be who he is in terms of personality. Gundy said they’ve done that with all of the quarterbacks because if they are trying to be someone they aren’t, they’ll be seen as artificial and teammates won’t follow them.

• “(Sanders) needs to stay away from the referees when that mic’s on.”