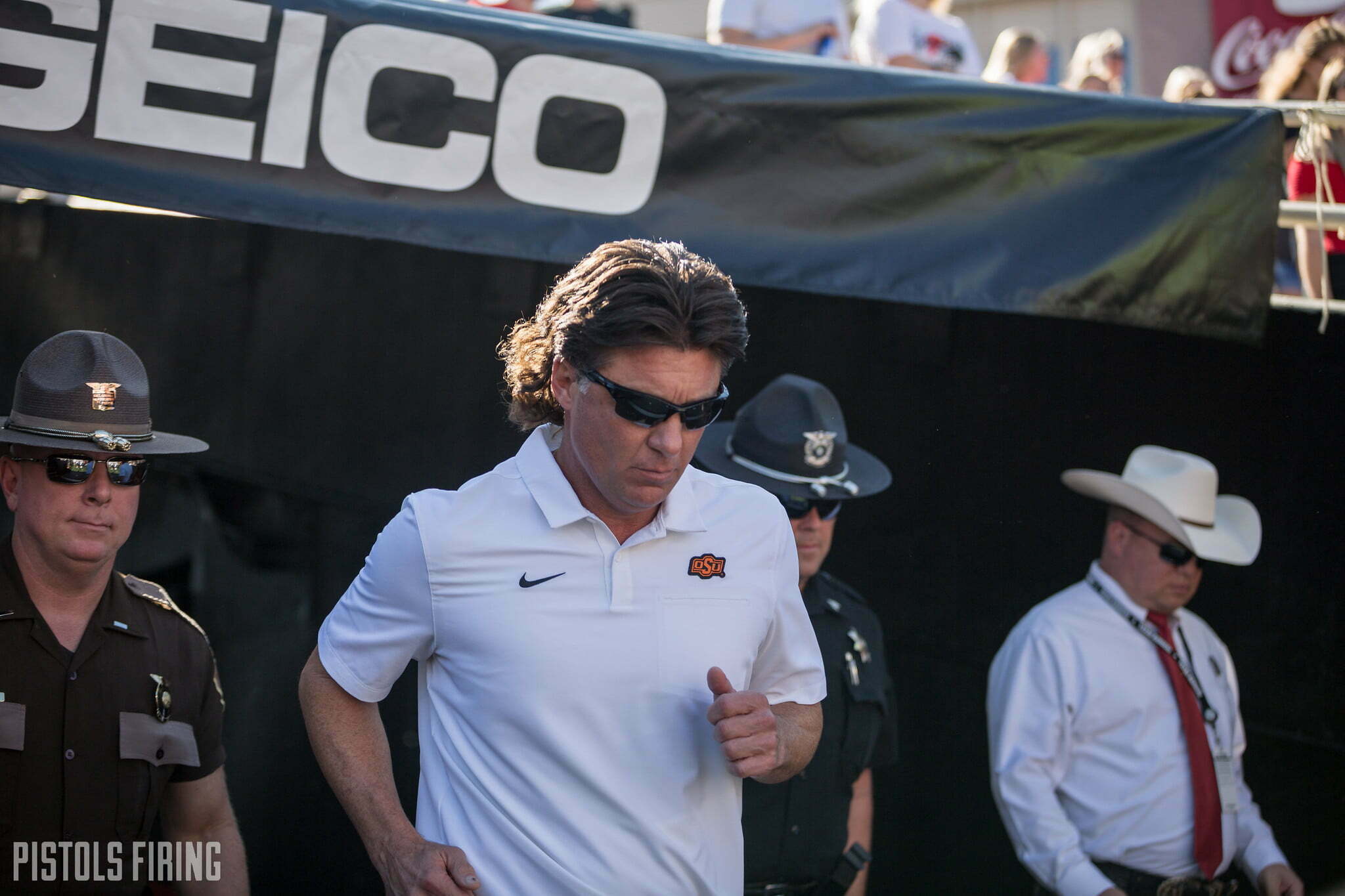 STILLWATER — Oklahoma State and Kansas are the only Big 12 teams that went six weeks without a bye, but they both finally made it to an off week.

OSU coach Mike Gundy met with the media after his team’s Tuesday practice. Here is a breakdown of what he talked about.

• The first few days of the bye week are a lot like August, focusing on fundamentals and getting reps for younger guys who haven’t played as much. The “varsity” got a little bit of work but not as much.

• “It was fun. Today it was very loud. Couple times, you know like in high school you have a fight in the cafeteria, you know that sound? That’s what was going on. They were all competing and having fun. … Very energetic and guys were enjoying themselves. They know they get four days off, so like all of us, we go to work and if we know if we got a four-day weekend coming up, that day at the office is a lot more fun.”

• The coaches will work Wednesday, Thursday, Friday and Sunday. Coaches will go out recruiting.

• Gundy said he wishes they would’ve had an open week earlier. He said you’d like to have one after week three or four, taking all the time spent in August into consideration.

• Guys like A.J. Green and Chuba Hubbard didn’t practice much the past couple of days. They were able to rest.

• Defensively, leadership is “pretty similar” to what it was last season. Offensively, the Cowboys get a lot of leadership from Hubbard.

• On young guys who have stood out given the opportunities in bye week practice: “(Carson) Kropp made some plays. I watched him on the inside drill, and he made some plays. Langston (Anderson) looks a little better. He’s coming around a little bit. He’s been bum with a hamstring off and on since August. It’s slowed him down a little bit. He’s starting to get up and running. Deondrick (Glass) made a few plays. And Isreal (Isuman)-Hundley made a few plays now that I think about it.”

• Gundy said he hasn’t gotten over Texas Tech, but the players have. “Young people are so resilient nowadays. We live in a world that moves really, really fast based on technology and social media. Coaches have to put their big-boy pants on and get over it because the players get over it. They just move on. Kids move on, and they go. There’s not any hangover with them in their preparation.”

• Baylor is a good football team. The Bears play three down defensively. They have skill on the perimeter, and Charlie Brewer is playing well.

• OSU’s offensive line played “average” against Texas Tech. “I said this the other day, both sides of the ball upfront we played average. At some point we put the defense on the field too many times. They had 18 possessions. I have to take into consideration, how would they have played if they had 14? Which is normal.

“Offensively up front, we actually played better than I thought after the game. But we played average.”

• On Spencer Sanders: “Well the first thing he needs to do is take care of the football in the pocket. That will solve half his problems. We’re gonna coach that, and we’re gonna drill that. We have a plan in place to correct that mistake. Essentially, you don’t give yourself a chance at all when you turn the ball over in the pocket. Those mechanics need to be improved, and we have a plan in place for that. Now whether we can do all that in two weeks, I don’t know. But I feel like a month from now, it’ll be much better.”

“He’ll buy in. Spencer is a very prideful, emotional young man, and he wants to do good every single play. What he has to learn is this: at quarterback, that’s not the way it is.”

• OSU has to get the ball to Jordan McCray more. “He went up and made a big-time play and then was really good with the ball after he caught it. He used all his moves in one play.”

• “We can talk about the players at Tech, but I think I pushed the players too hard. I stressed them out too much. I probably should’ve backed off a little bit at where we were in the season. I didn’t. We could’ve done some things different offensively, and then defensively we could’ve done some things different. It was just an out-of-control snowball that everybody has to take responsibility for, including myself.”

• He thinks LD Brown was in nine plays at Tech, but he needs to be in about 20.

• “Chuba can’t take … I just don’t think he can do it 32 times a game. It is hard to take him out. I think all ya’ll would agree, it’s difficult to take him out of the game. But we have to do it, and LD is doing what we asked him to do. When a young man does that, you gotta give him a chance.”

• Jahmyl Jeter entered the portal but is still practicing with the team. “It’s like the NFL. If you don’t like it, just ask to be traded.”