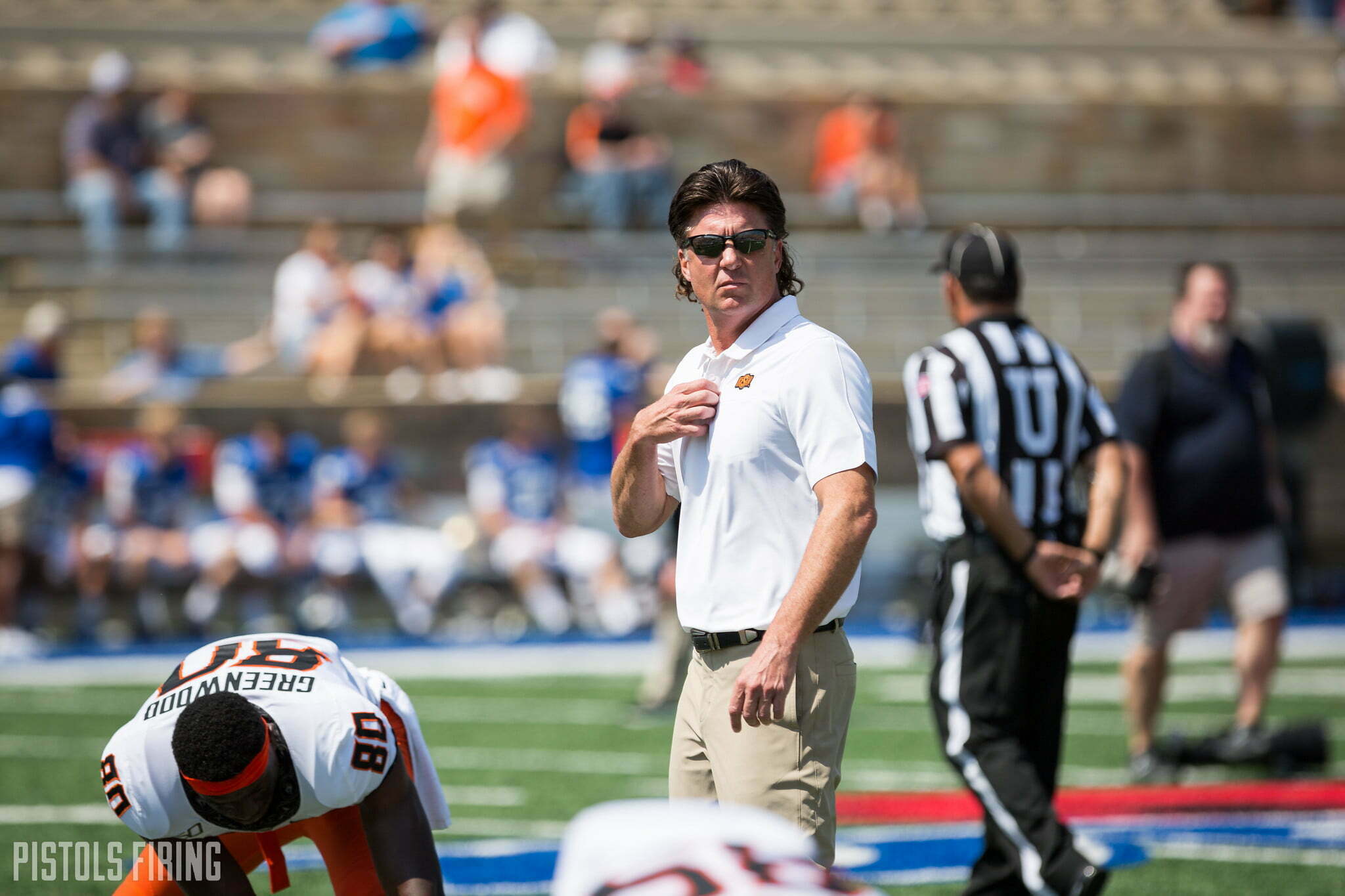 The Cowboys’ spring schedule is somehow already winding down.

Oklahoma State coach Mike Gundy met with reporters following Tuesday’s practice, here is what he had to say.

“Everything is going great. I just told the team that I couldn’t be more proud of their effort. These are long, hard practices. We’re up around 100 plays in a team session after practice per practice. These are really good, long, hard, physical practices. Based on all the new entry guys we have, we have enough reps to get the ones and twos and the young guys, which would be the threes, a lot of quality work. I’m really excited about the work we’re getting in and the competitive nature that we have at practice.”

On if OSU is staying healthy despite physical practices

“Knock on wood, we’ve been very fortunate. We’ve had a couple guys here and there get banged up that have missed a practice or two, but for the most part, most of our players are still out there and still competing.”

“Defense is starting to win over the last three or four practices, which in most springs that will happen. They’re playing very well. Both sides are competing, but as you move toward the latter part of spring, which believe it or not, that’s where we’re at, your defense should start to win and have more success based on they’re seeing some of the same stuff every day. But I like what we’re doing in all three phases. We’re having quality work, but defense is having good days.”

“We’re able to get this many reps because they’re in really good condition right now.”

On how much development he has seen from the early enrollees

“I just sat next to Coach [Gary] Gibbs and was watching practice, and I shared with him that this is the first spring practice where we’re able to have the threes execute and look like a traditional two group because they’re in practice 10 and they’ve been getting 40 or 50 team reps each practice. Normally in spring practice, they don’t get any team reps because we don’t have the numbers. So, we’re seeing considerable improvement. They might not know it because they’re messing up so much. Their heads are spinning, but they’re getting better because they’re seeing things, they’re getting coached on film and they’re making some corrections the next practice.”

On the Spring Game format

“I think we’ll be able to divide and have a decent game. Our goal is to provide good entertainment for the fans, let them see the players, see some of the new guys, see the names they’re familiar with, provide them with a real football game. Four quarters at 15 minutes could be hard, but maybe we play a full half — 15 and 15. That’s an hour of real competitive football with the clock not continuously running. I’ll be honest with you, if the clock’s running all the time, it messes me up.

“We’re gonna have a good show. We’re gonna try to put together an hour and 30 or an hour and 45 minutes of really quality football so the fans can enjoy it. Then they can go watch baseball.”

“The offensive linemen, we have young guys, some high school kids that came in early and young guys that have never really played, for them to function like they are in our offense, really all of them, is impressive to me. It’s extremely difficult.

“Our young quarterbacks are getting more work than ever, and they’re functioning — not easy.

“Defensively, our young corners that need to progress so that we have quality backups this next year and we can get them some reps, they’re functioning pretty well.

“Well, Lamont was hurt last year, came in and through the COVID was out of shape, set him back. Then he got hurt, set him back. He’s healthy now. He’s in good condition. I wouldn’t say he’s in great condition yet, but he will be. But he’s in really good condition now. It’s allowing him to play faster and not think. So, you’re seeing him use his ability. He ran 4.58, 4.62 or something at 235 pounds. We have to find a way to get him on the field. We don’t have a lot of guys that can run that fast that weigh that much. At this point, I don’t think he’s scared of football. We gotta get him out there. He seems to be doing pretty good at this time.”

“Spencer’s having a really good spring — his best spring. He’s going in Year 4 now. His best spring, which he didn’t get a spring a year ago. He’s progressing, seeing things that we want them to see at that position like Taylor [Cornelius] did and Mason [Rudolph] did. He’s starting to see those things. The spring he missed last year, and I never really thought of that until you asked me that question, we should’ve seen in last year, but we didn’t have spring. But we’re starting to see it now. He’s having a good spring practice.”

“He’s doing really good, another guy that’s back in shape now. Tyler is mature and veteraned and has been around. If he decides to push himself, work extremely hard and compete and fight, he’s gonna get a chance to make a little money playing this game some day with the skillset that he has at this time, in my opinion.”

On the transfer portal

“The portal falls into religion and politics conversations, you don’t want to have that at the family gathering. But I will say this: about a week ago, there was 1,182 of them on there that have not landed anywhere. If I had a son that was looking into it, I would express some caution unless they felt like they had a good place to land.

“But do I think that young men deserve a chance to make a change if they want to go somewhere they think they can play, yes if it’s for the right reasons — like anything we do in life. All of this, it doesn’t make a difference what it is, if we make a quality decision for the right reasons, I think it’s a good resource. If you get in a hurry and jump to something and don’t really know where your landing spot is to a certain extent, could be an issue.

“There’s just not enough spots. Like the old game they play at carnivals where they turn the music off and you jump in a chair, there’s not that many chairs left. So, you just gotta be a little careful.”

“He’s played enough, and he’s made an improvement. I’m seeing things now that I didn’t see from him last year. So now he just needs to continue to do it. We need to keep things simple, let him play fast and do what he does. Let him roll.”

On if Spencer Sanders’ progression helps other players on the offense

“It’s like a Rubik’s Cube, you can’t just do one side. You have to do all of them at once if you’re gonna do the Rubik’s Cube. That’s the same thing with playing quarterback in this offense. You have to be able to do everything at once as we progress to make it all function. That’s why guys that have played in this system, once they get into year two and a half and three and on, they look a lot different because they start to be able to figure out that Rubik’s Cube, not just one side.

“That was pretty good, I just threw the Rubik’s Cube out there. By the way, I never got the Rubik’s Cube done. I did one side only. I took the stickers off and did it one time and redid it at night. I didn’t tell the truth, I said, ‘Look, I did it.'”

“I’m convinced that that will happen. All of this is part of the formula of your quarterback progressing, figuring things out, depth at running back. Now we have experience at running back. Knock on wood, last year we had some hard knocks on the offensive line based on injury, those guys now got a lot of reps. They weren’t ready, but that has helped him. They’re better, and they’re gonna be better next year. I’m excited about that.