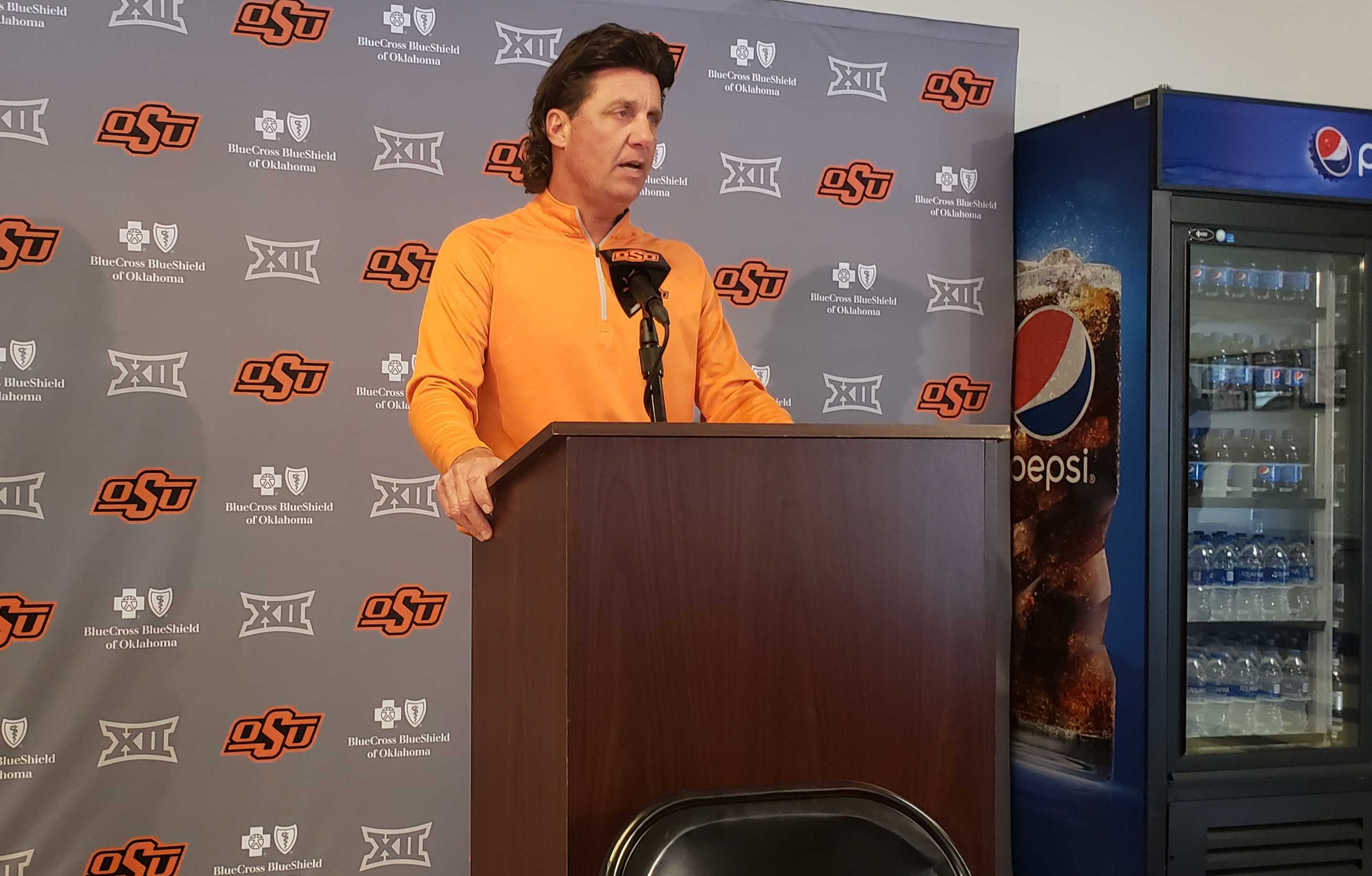 STILLWATER — Without a game from Saturday to talk about, Mike Gundy’s pre-Baylor media luncheon was rather short Monday.

Gundy usually goes for about a half hour, but with not much happening since he spoke with the media Tuesday, Gundy only went about 14 minutes Monday. Here is what Oklahoma State’s coach had to say entering his team’s homecoming matchup with the Bears.

• OSU had a good practice Sunday night. The team has Monday off, as usual.

• Baylor is getting “really good quarterback play” from Charlie Brewer.

• “Looking forward to the homecoming. This is a big week for Oklahoma State, obviously the largest homecoming in the country. We’re guesstimating 60 to 70,000 people back in town.

“The most difficult part for me is tickets. Everybody wants tickets: former players, ex-players, pro players. Difficult time, but it’s a good problem to have that we have that many people coming back. We’ll have a full house. Perfect time in the day in the afternoon for college football.”

• Gundy said he imagines any NFL former Pokes with a bye week will be in town. He added the program had an alumni weekend for the Kansas State game and about 150 former players showed up.

• Organizing alumni activities hadn’t been anybody’s job until recently. “It’s one of those things where everybody says it needs to be done, but if you don’t put somebody in charge of it, nobody ever takes care of it. We’ve had it as secondary to certain people, but now we’ve got it to where we’re handling it in house for the most part. So, I think it’s done very well, and the players have appreciated being a part of the program that they put a lot of time and effort into during their years here in school.”

• Mason Rudolph texted Gundy Sunday night to tell him he would be in Stillwater this weekend.

• Spencer Sanders needs to take care of the football. “As most years, in particularly this year, we can’t lose the turnover battle and expect to be successful. That’s the starting point with him and what we’ve pressed and put into place.”

• On the benefits of the open week: “It was good for us. Guys were fatigued. We’ve been at it nine weeks, coaches and players. They needed a little bit of a break, so we got some quality work done last week and then we gave them the four days off. They came back (Sunday) night and had a good practice. I think everybody feels good about it. It’s a long season. It’s a rough game, and those are nice breaks to give everybody a chance to catch their breath.”

• On Baylor: “They’re 6-0 to start with. Obviously it’s not easy to get to 6-0. You’re seeing a quarterback that’s, I think he’s in his third year now. He’s matured. He’s playing well. He doesn’t make a lot of mistakes. Defensively, they’ve got good edge pressure. Guys are getting up the field and pressing. The nose guard is a big guy that is disruptive in the run game.

“They’ve been good for quite a while down there. They had a couple tough years when all the issues were going on down there, but they’ve still recruited good. They’re in a good location geographically to recruit. They’ve had good players there, and I think (Matt Rhule) does a nice job with coaching them from what I know. I don’t know Matt real well. He was on the east coast. They do a nice job. I think the best way to sum it up is, they’re 6-0. No matter how you get to that point, it’s a good accomplishment.”

• OSU has been better in terms of discipline this season.

• On pressuring the quarterback: “I think that’s always an issue. As teams transition to more of a three-down look, it is difficult at times to get pressure on the quarterback. Then the other thing that happens is, when you’re working too hard to get pressure, then you’re creating gaps for quarterbacks to run. You watch quarterbacks in this league and how many times guys have stepped up in the pocket and run for 6, 8, 10 yards on first down or even third down? There’s the issue you face when you’re in more of what people are playing now, which is a three-down look. I think that we have to be creative in trying to find ways to get pressure on a quarterback, but then you also have to find ways to cut those gaps down because the guys in this league are really good at sliding through there and picking up yardage.”

• Left tackle Dylan Galloway practiced Sunday night after missing the past two games. “Hopefully we can get him back this week.”

• “Any time you lose a left tackle, doesn’t make a difference what experience you have, it’s not easy. It happens. Injuries are a part of the game. When you start shuffling around those five guys, I’m not a big fan of that. You guys that have tracked me for all these years, if we didn’t have injuries very seldom did we ever move those guys, even in years we struggled. We still said if we don’t keep them in the same spot, it’s not easy to get better.”

• On the difficulties of snapping the football: “We have been fortunate. They have done a good job. You can go back for a number of years with us, and we’ve been fortunate with those guys. They’ll move around some. It’s hard, you got a guy lined up on you or you gotta reach a gap player and you’re trying to snap the ball and step at the same time. It’s not normal. It’s unusual.”

• Gundy said he doesn’t see the game moving back to the quarterback being under center a whole lot.

• On O-line depth: “(Bryce Bray is) obviously was new this year. (Hunter Anthony) was brand new. They’re playing OK. It’s not like that they’re a big issue. They just didn’t have the experience, but they’re getting a little bit better. When Galloway comes back, we’ll have some guys there to rotate through if a guy gets bummed up a little bit.”