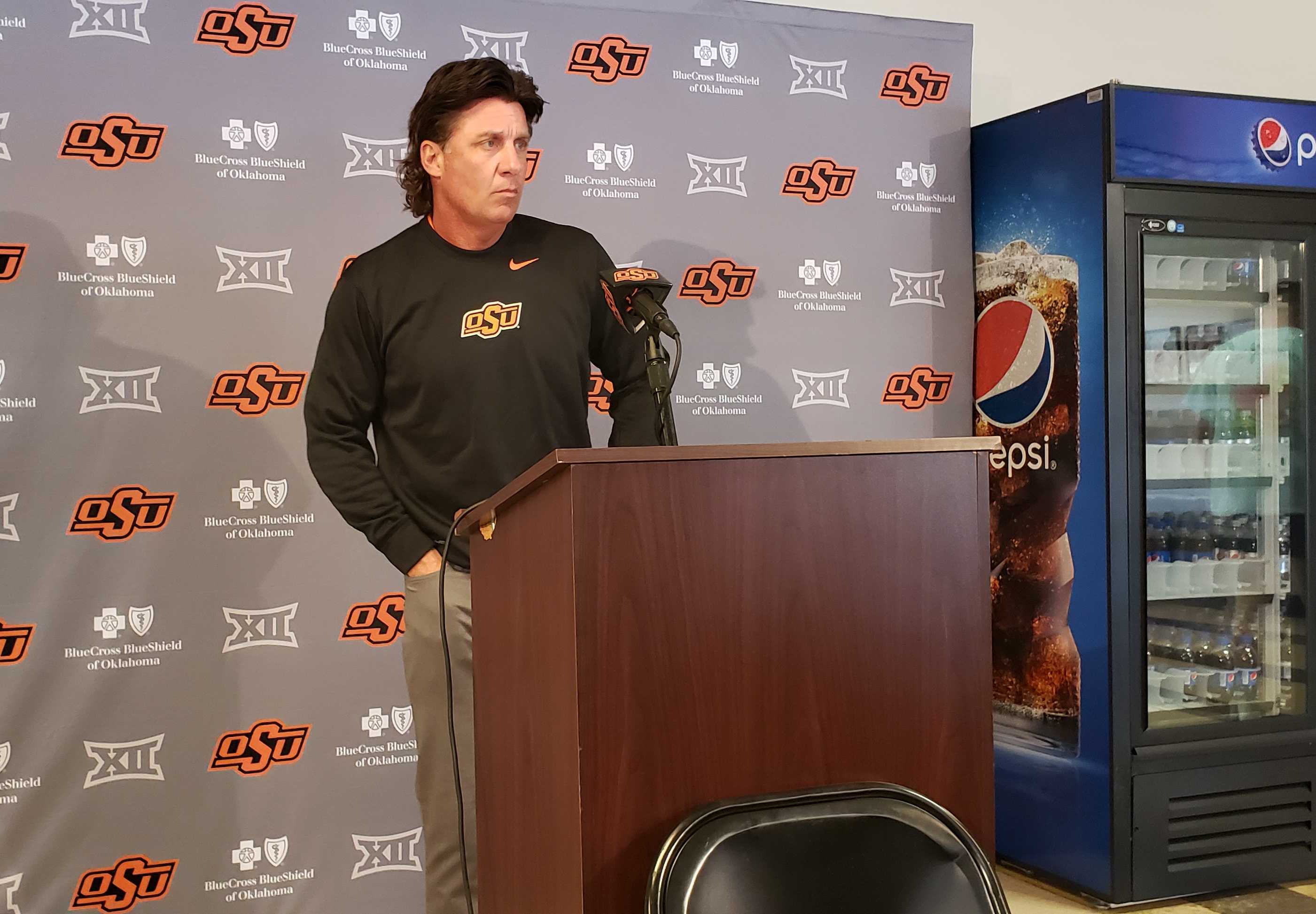 STILLWATER — Mike Gundy’s weekly media luncheon had a little bit of everything Monday.

• His postgame comments on the Kansas State game were accurate.

• On defense, Tech is “playing three down and blitzing just like everybody else in the country.”

• “The Big 12 has led the way offensively. It started about 10 years ago. Defenses have recovered and are finding some answers to the offenses in the Big 12.”

• OSU’s linebackers are further along than he thought they would be to this point.

• Israel Antwine “gets a little better each game.” Antwine is getting into playing shape.

• The defensive line is coming along, but “there is no fast forward button for experience.”

• Nothing to update on Calvin Bundage.

• K-State allowed Tylan Wallace to get going early, but moved a safety over him later. That opened up the running game.

• On Wallace’s play as a running back: “Well, it didn’t come out good. I sure liked it in practice. That was not the result we were wanting. We were looking forward to him running in and scoring. We blocked it incorrectly.”

• On potentially getting Dezmon Jackson and Jahmyl Jeter involved: “LD (Brown) ran better. He got east and west on this field, north and south on most other fields, but he’s moving forward. He dropped his pads. He was aggressive. He didn’t stutter around with his feet, so he improved. The other guys are getting consistent work in practice. It’s just hard to take Chuba out right now. So, when he’s in the game then LD gets his, and he was running better, it’s just hard to get to down-the-line guys right now. When (Hubbard) is on the field, we’re a different football team. The justification for that isn’t really in place.”

• The ragtag O-line played better after the lightning delay and continued to get better throughout the game. “It’s a learning experience for all of us. It’s not something I’d highly recommend for coaches.”

• Gundy said he doesn’t know yet whether it’ll be the same starting O-line against Tech.

• Tre Sterling processes information quickly. Gundy said he is excited about the improvement Sterling has made in just one year.

• On the O-line shuffle: “We all know that continuity and years of service at those five guys is very beneficial. When you move them around, it’s not the same. You say, ‘Well, he’s an offensive lineman,’ It’s not the same. Bryce (Bray) went from playing guard to left tackle. It’s not the same. You tell by looking at the salary structure in the NFL at left tackle as compared to the NFL right guards. It’s the same for college maybe even worse. Was I nervous? Sure I was. Am I nervous now? Sure I am.”

• “We promised (Johnny Wilson) four tickets to a heavy-metal concert this summer if he bought into it.” (In case I needed to mention, that was a joke).

• Hunter Anthony got better as the game progressed. He has a mean streak.

• “We’re getting good play from X, (Jordan McCray), (C.J. Moore) and those guys, but the ball hasn’t gotten to them very much. They’re not doing anything that’s disappointing. They’ve actually improved considerably, and they need to get the ball more than they have. But I think most everybody would agree that it’s important right now that (Hubbard) gets his touches and (Wallace) gets his touches.”

• Tech likes to get the ball out quick with short passes, and it likes to throw the ball deep every six or seven plays.

• “(Spencer Sanders) didn’t throw the ball as well as he would’ve wanted. For whatever reason, I don’t know. If I knew we would’ve put a plan in place prior to that. But he’s still ultra competitive. He would’ve like to run the football more. We were in somewhat of a preventative measure there to protect him as much as possible. He’s going to continue to get better each game.”

• Sanders is doing “very well for where he is in his career.”

“New video game comes out, the more you play it, you get a lot better. It’s really the same thing, same concept. Did you ever play Donkey Kong? You started on Donkey Kong, you could never get past the elevator level. You have the barrels, then you have the structure and then the third level was the elevators. That third jump you had to make to get up to get over took a while. But after you did it 50, 60 times you could make that jump and you were set. You had a chance to set the high score. It’s that jump.

“(Sanders) is on the barrels. Nah, I’m joking, he’s not on the barrels. The barrels is easy. That’s an easy one. We’ll get off Donkey Kong. He’s doing fine. He’s on the structure now. He’s conquering that. He’s working to get to the elevators. He’s probably past the first jump. The second one’s not as bad. The third one’s the tough one.

Have you been playing Donkey Kong recently? This seems very vivid in your mind.

“I do, yes. I do. I’m a closet Donkey Kong guy. My kids are old enough that I can’t compete with them in any of the games they play. So I have to try to get them to play Donkey Kong periodically because I’m pretty good at Donkey Kong.

“There used to be a Godfather’s Pizza on Reno Avenue in Midwest City, and I’d ride my bike up there and play Donkey Kong all the time, set the high score. Can you imagine that? Kids riding there bikes. Nowadays, nobody rides a bike anymore. Isn’t that amazing? Alright let’s talk about Tech.”

• On if a running back can win the Heisman: “Oh sure, I think so. It’s just comparable to numbers from the past. That’s all we have to go on. They’re going to compare (Hubbard) to whoever won the last Heisman that was running the ball, what were his numbers? What was his numbers? Yards per carry, things like that. I would say that that would be the direction they would go.”

• On the rushing struggles of 2015 to now: “I wanted four yards a carry, and I just wanted 100 yards. I love to rush the football. Some of my quarterback buddies give me a hard time about it, but I enjoy rushing the football and pounding teams. I really liked that part of the game. It’s enjoyable for me to watch the progress that we’ve made just over the last couple years.”

• On Tech quarterback Jett Duffey: “Well he played last year. Run around a little bit, and I think they’re gonna do some read stuff with him. They want to throw screens. They want to throw bubbles, get the ball out of his hand quick. They like to throw the inside game, slants and such, and then throw it down the field.”

• OSU isn’t going to be able to keep kicking field goals and winning. Eventually the Cowboys will be outscored if they aren’t better in the red zone.

• On if he can tell what Matt Ammendola has done to become as consistent as he is: “I have no clue. What they do mentally, physically, I don’t have any idea what they do. Your kickers, your punters, your holders, your snappers are the most dedicated guys on your team because they practice on their own. We do our practice, they come in the stadium and they do everything on their own. They have a 45 to 50-minute routine each day, three days a week. And nobody’s really watching them, and they’re dedicated and they do it all the time. They have the students go out there and video them. We have coaches that meet with them and try to correct them. I don’t think anybody knows, I think they just say stuff to make them feel better, but they have to perfect their own art. That’s what they do. Those guys are dedicated. They do good. You just leave them alone.”

• Tom Hutton is getting better each game with experience in American football. “At this time next year, he should be really good.”

• On college athletes making money off their likeness: “I say pay them. If they’ve earned it, pay them. Let them go. Is there a guy on there in the last four or five years on the video game that’s got a mullet? I say pay that guy. That’s my likeness. There can’t be another guy coaching with a mullet at Oklahoma State. Attorneys are gonna make a lot of money, right? Federal level and state level as it progresses.

“I don’t know enough really to comment on it other than the money’s not what people think it is. I think Clint Chelf got something (from the video game), like $12 or something, which is $12. So, I don’t know what the money is on it. But if somebody’s making a bunch of money on it, and they want to reward the athlete some, I don’t see a problem with that. The issue you have is what if one state does it and a different state doesn’t then what does the NCAA do? There’s your attorneys on the state and federal level making a killing. They’re lined up out there just saying, ‘Hey, I’d love to take that case.’

“We all complain about the NCAA at times, but it has been uniform, right? The speed limit’s the speed limit. That’s the one great thing about this country is for the most part we try to stay uniform. We all follow the same laws. Well the NCAA, people complain about it, but they have done that. The system’s in place. You gotta be careful about getting out of your box because is California gonna be different from Oklahoma? Does that affect recruiting? Sure it does. Are they just gonna have a California State Championship? Not gonna play for the national championship? I don’t know. It’s all way over my head, but again, I go back to the attorneys are gonna be lined up for it. If the players get a chance to make a little money, pay them a little money. I don’t see a big deal in that.”