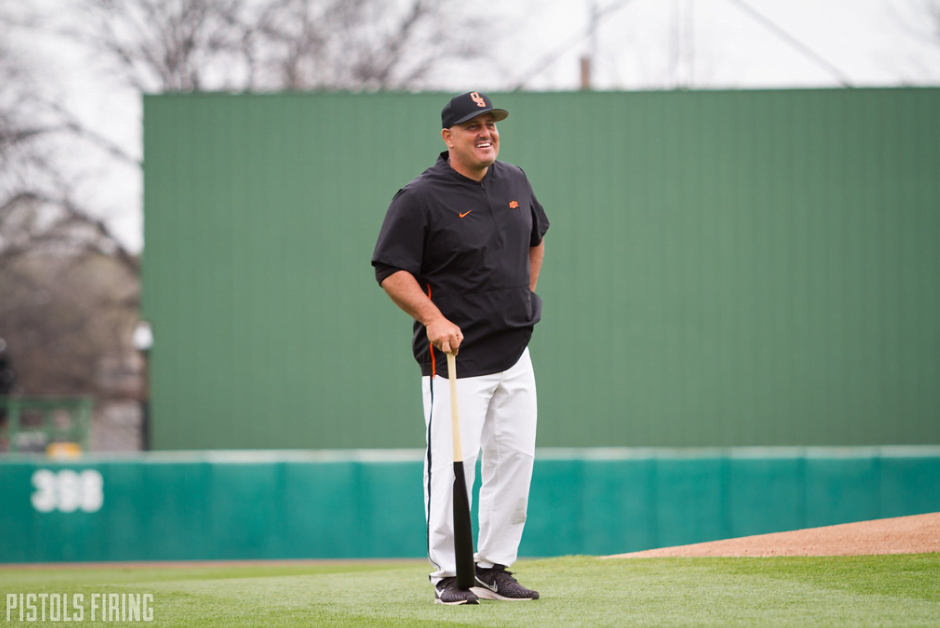 Oklahoma State kicks off its 2020 campaign this weekend when the Cowboys head to Arizona for a three-game series against Grand Canyon. The Pokes will have an off day in Phoenix on Monday before also playing a game with Arizona State on Tuesday in AZ.

OSU coach Josh Holliday met with reporters Tuesday morning. Here are some of the highlights.

• “We’ve gotten a lot done. We had three good days in a row, Friday, Saturday, Sunday. We had a short day yesterday. We’ll have a short day today and then off day Wednesday to get ready to travel on Thursday. Kids have done a good job. We’ve probably amped it up more in the last two weeks.”

• Holliday said the Cowboys will have “pretty much a full squad” in terms of health this weekend.

“I know Coach (Rob) Walton is still kinda working on the order on how he’s gonna line the kids up. He’s gonna start those guys. Really, just trying to match it up where we have good bullpen depth each day. It’s a four-game trip, not a three-game trip since we stay over and play ASU on Tuesday. Really he’s gonna look at that window of Friday through Tuesday and just try to line up our best guys that can bounce back, say maybe work on Friday and bounce back and work on a Tuesday or guys that can work on a Friday and a Sunday. Kinda build the depth of each game.”

• Holliday said pitching depth is important at the beginning of the year as guys are usually ready to throw only 65 to 70 pitches this early in the season.

• On relief pitcher Ben Leeper: “It’s good to have Ben back as a fifth-year senior. He’s got a lot of good experience. He’s pitched a lot of big innings for us. He’s had a lot of success, and he’s tasted the bittersweet feeling of being close but not quite getting over the hump as a team or on a personal level. You hope that all those experiences give him a chance to have his best year yet, and that’s really what we’re looking for him to do.”

• On Bryce Osmond, who was a highly touted pro prospect coming out of Jenks: “Bryce committed here in ninth grade. He came to a baseball camp here in January of ninth grade and was a shortstop at the time, could run like the wind, was really fast and athletic. Right away just had a love from Oklahoma State. Obviously we could see in him a great athlete who had tremendous upside. We didn’t know exactly what it would be, but we knew it was a great athlete and one that we definitely wanted.

“We had a strong relationship with Bryce, his dad and his family from ninth grade on. He always expressed a strong desire to be here. He then moved into a premier pitching prospect between his junior and senior year. His junior summer he really started to show some high-level pitching talent to go along with being a really good position player. His senior year was much the same. Down the stretch of his senior year, he shot up and a lot of pro teams had strong interest in him, but he wanted to be here. This is a place for him that feeds not only his baseball development but his academics. He’s very smart. College was just something that Bryce valued. It ended up being where he wanted to be.”

• On Grand Canyon: “They have a beautiful facility, brand new. I think it’s been open about a year. The coach there (Andy Stankiewicz) is a good friend of mine. We worked together at Arizona State. I know his team will be well-coached. He’s an awesome man. They have a good ball club. The weather is usually great out there. When you land in Arizona, you know baseball season’s here. It kinda has that feeling.”

• On Alix Garcia: “Last year he came in and showed a great feel for things. He waited his turn. He pushed his way into the lineup. He delivered when his chances came up. He held the job. He competed fiercely. He kinda won over his teammates with his competitiveness and playfulness. He’s a very strong competitor, but he knows how to laugh and he just doesn’t take himself too seriously. He really just kinda fit. He showed a great feel for being a part of the team. He showed a maturity about him that everyone really warmed up to. I think he still possesses those qualities, for sure. He’s fun because he’s married. He’s just got a cool perspective, and he’s a good influence on the younger players. He has a lot of strong qualities.”

• On scouting for the first series of the season: “There’s modern technology that we never had that we have now. There’s so much out there now that never existed before. This video database, you can log into it and watch every pitch that the other team threw or hit last year. You sit down, and you just kinda use your eyes to tell you what you see and watch the way they go about their swing or how they pitch. Players can be different year-to-year, but this database here has got pretty much every pitch in college baseball sorted by team, by player, by count, by score, all of it. The information age is here.”