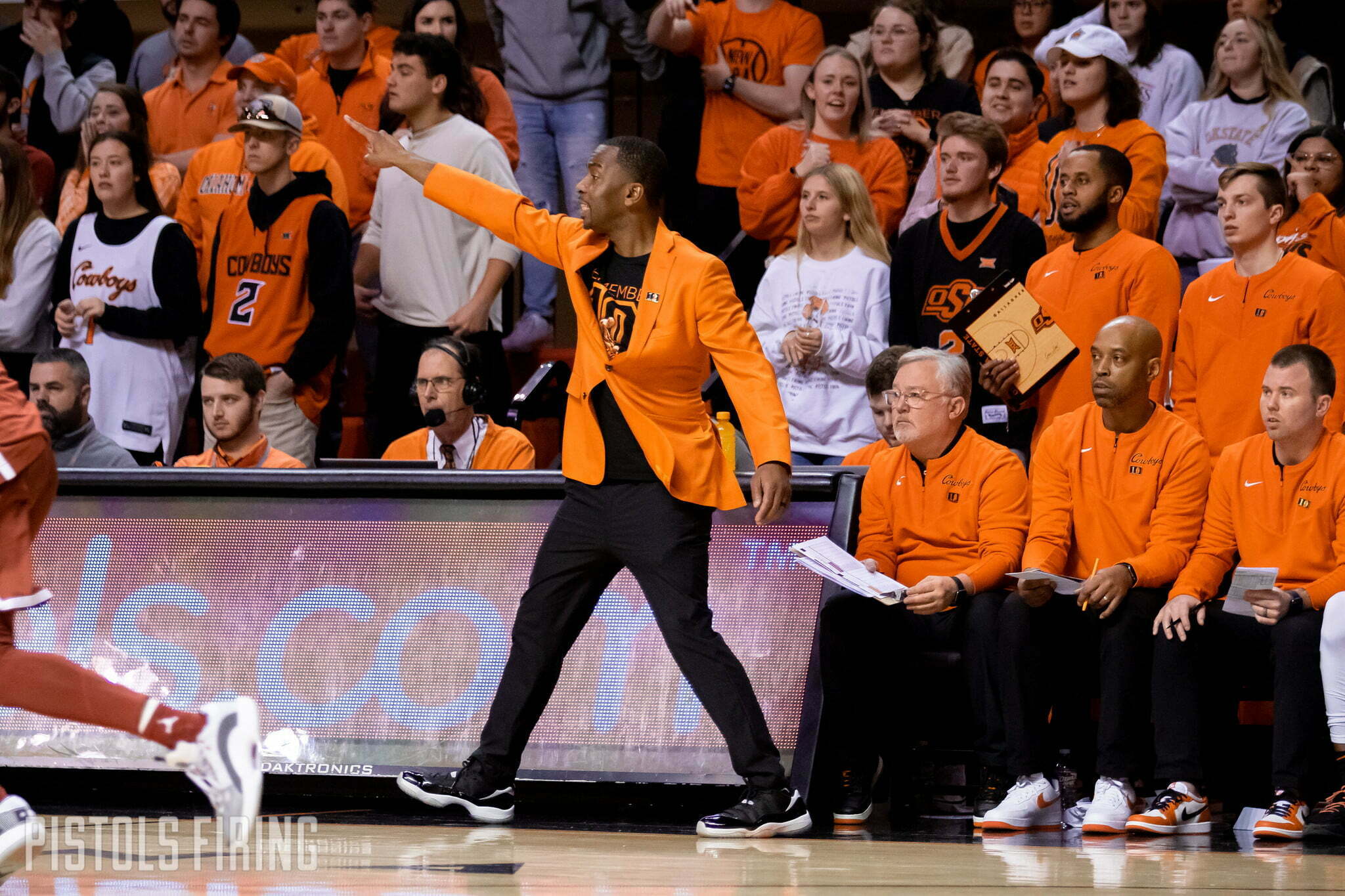 STILLWATER — The Cowboys are a week into their 2022-23 practices.

Oklahoma State coach Mike Boynton met with the media to update things on Thursday. Here is everything he said.

“We’re midway through the second week of practice. I feel good about where we are. Obviously, a long way to go. We got six weeks or so before we tip this thing off and it counts. It’s exciting to get to work with these guys. I’ll say this: through, this will be practice No. 7, we’ve had a few days off here, this group is really, really eager to learn. They’ve worked really, really hard. We’ve changed up the way we practice. We do some morning shooting and some offensive sessions, which is a little different for us, just trying to be better offensively. And they’ve not complained about anything. Boot camp was hard, they got through that. I’ve been really, really pleased, just with their willingness to do what the coaches and staff have asked, although it’s been really, really challenging.”

“There’s so much stuff that you’re introducing, particularly to guys who are going to be in decision-making positions where you kinda got to go through the progression of it. It’s slower this time of year. So probably not a ton. We’re working some different combinations of guys just to see who works together. So, right now, it’s really just to get a feel for how guys learn. The offseason, up until last week, the time limitations don’t really give you an opportunity to say, ‘Alright, we’re gonna put you in an eight-minute scrimmage segment, and I’m gonna watch how this plays out.’ Now, instead of eight hours a week, we get 20, and we can really be in there for a couple hours at a time, just really grinding through stuff and working on zone offense and working on presses and watching how our lineups flow together and whether guys know how to screen, when guys are open, stuff like that. It’s still early, but I like the progress we’re making so far.”

On the morning offensive sessions

“Our offense needed surgery — needed major surgery. You can’t play this game at a high level and not be able to shoot the ball from the outside. It wasn’t a strength of ours. The numbers bore that out. It’s the reason why even in some of the close games we just couldn’t get over the hump. It’s hard to win if we don’t make shots. We addressed it from a personnel standpoint but a style of play standpoint, as well. And then because of that, not only is it new for John-Michael (Wright), Caleb Asberry, Quion Williams, it’s somewhat new for Kalib Boone playing on the perimeter some more and being asked to be a threat out there. It’s different for Avery Anderson and Bryce Thompson who now will be handling the ball and being decision-makers more than they were last year. We knew it would take time, which is why we’ve taken a different approach.”

“It’s hard to say. I don’t want to create this illusion that we’re all of a sudden the Warriors. We’re not the Warriors. We don’t have Steph (Curry) and Klay (Thompson). We have more guys on the court that you feel are capable of being a threat from the 3-point line than we have. The proof is on Nov. 7, when we play against somebody else and there are officials and people in the stands, like do they make them? I feel confidence that they will. It’s hard to deny when you talk about [John-Michael Wright and Caleb Asberry] — they’ve done it for multiple years. For their careers, being close to 40% is pretty good. Not that either one of them are Thomas Dziagwa — they’re both better athletes than he ever was or dreamed of being. But, they’re guys that when we play pick-and-roll offense, which we will continue to do with Kalib and Moussa, if you help, we kick it out to them and you’re not cringing, wondering what’s gonna happen next.”

On versatility with this roster

“I want to be careful not to say we don’t have length. We’re just not as long on the perimeter. We were unusually tall two years ago. Our starting backcourt was also sometimes our [power forward] and [center]. That doesn’t happen. With that being said, we still have good size, particularly in the frontcourt. We just don’t have as much length in the backcourt, which is fine. Those guys are touch enough to still defend the way we want, rebound the way we want, and I think the benefit of them is the way they’re — Caleb, John-Michael and Quion, all three — they can be a threat from the 3-point line.”

On whether defensive buy-in helps him focus on offensive improvement

“Part of the reason we also feel confidence in being really, really focused on getting better offensively, A. we weren’t really good there, but our defense has been so staunch. Again, I talked last week, we don’t have a lockdown person, right? I don’t feel good saying if we’re playing against Steph Curry we have a good chance if this guy is on him. We got no chance anyway, but the point is I think our guys understand our defensive system, and the guys who have been here know it works. You don’t finish fourth in the country in defensive efficiency just because you want to, especially against the teams in our league who have tremendous talent. We just had to make some minor tweaks personnel-wise to continue to be good there. Helps to have the rim protection to start of guys who we’ve had before, Moussa and Kalib, who were the top two shot-blockers in the league and Tyreek Smith, who is pretty good at it, himself. Just getting those other guys to learn. So yeah, it gives us the confidence to then really, really focus on getting better offensively, moving the ball better, making better reads, spacing the floor better and then ultimately making shots.”

“Yeah, I’ll be honest, all of [the bigs] have really worked at it. None of them are guys I want shooting five 3s a game. They all can shoot, and what I tell them — because they all want to shoot more 3s — and what I tell them is, ‘You have to become a great layup-maker and a really good free-throw shooter first. And then, the natural progression, right? Then you can have an opportunity, if you can make shots from those areas, to expand.’ To their credit, they all worked at it. I’m comfortable with any of them shooting shots at 3-2-1 [on the shot clock]. I don’t feel like, ‘Ah man, we took a terrible shot.’ There’s a 35 to 40% chance that I think it’s going to go in. They’ve all worked at it and I think feel comfortable if they’re in that situation, they can shoot it.”

On whether there are similarities between Quion Williams and Isaac Likekele

“There are. They’re very different offensively. [Williams is] not as much a primary play-maker. He’s more of a secondary attacker. He’s a tremendous rebounder. He’s a better shooter, frankly. But Ice had to learn, too. He’s a freshman, and he’ll take some lumps this year at some point. But the thing about [Williams], Ice came in here with five other freshmen, Quion is the only one. So, he’s got more big brothers, more guys to kind of lean on and say, ‘Hey, it’s gonna be OK. You went 0-for-3 today, don’t worry about it. We gotta turn around quick get ready for the next game, which is gonna be just as hard.’ So, that’ll help him along the way.”