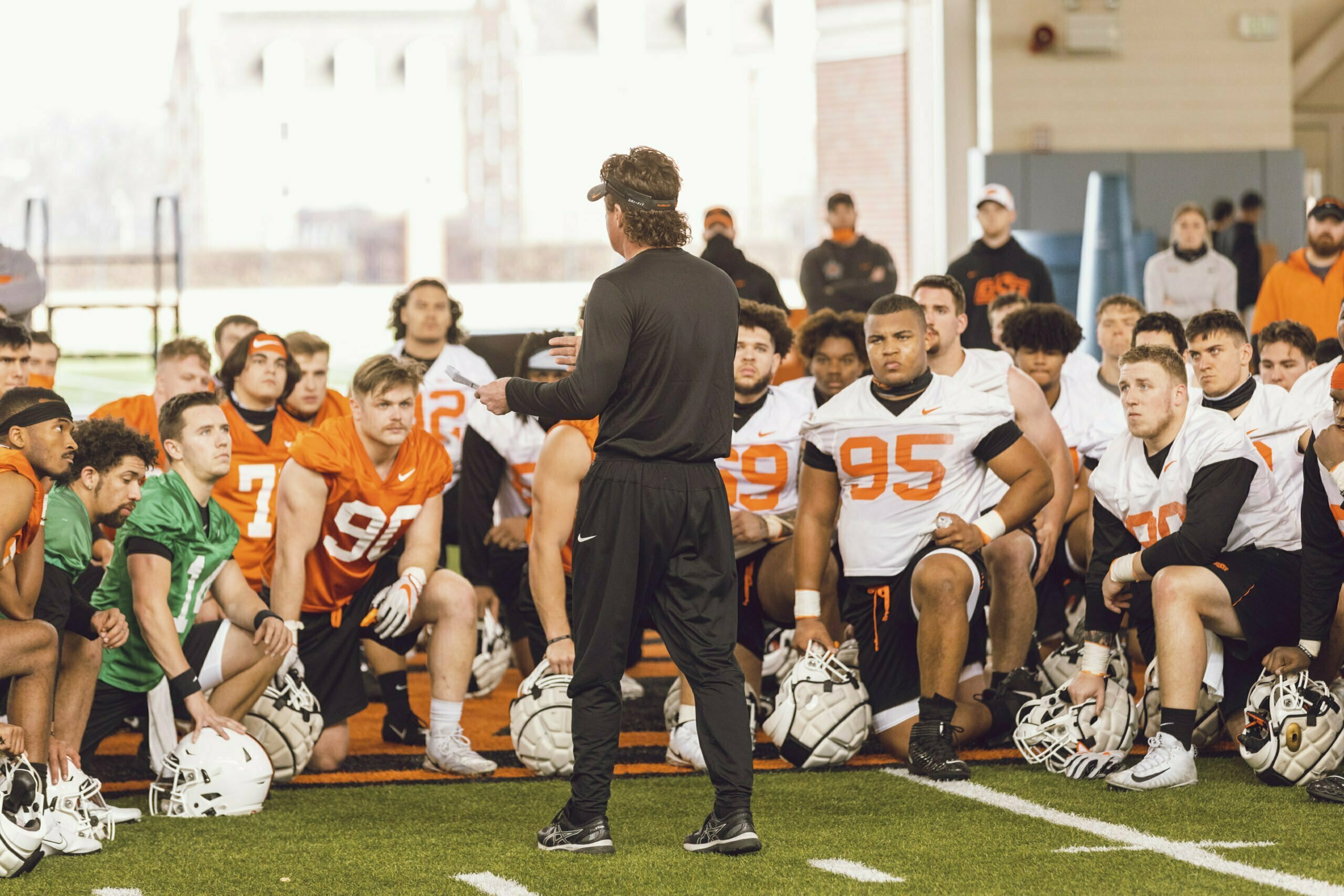 The Cowboys kicked off spring practice on Sunday and, as is tradition, Mike Gundy met with media members. He had a lot to address and here’s some of the best of what he had to say.

On having former OSU quarterback J.W. Walsh on staff.

“J.W. is a loyal Cowboy and a tough guy and a good player that’s wanting to get into this business. As I said a few years ago, most of the people that we hire that are tied into football are gonna be former players. There’s so many former players out there now that are wanting to coach or be in administration or be in strength and conditioning, be in operations.

“So he’s an example of what it will be like in the future. Is bringing young men back into the program that have already been in it. We just can’t get to all of them. There’s so many of them that want to come back that we don’t have as many jobs but it’s good to have him back.”

On his son Gunnar wearing his old No. 12.

“He’s always had it so it’s pretty cool. I wasn’t sure what number he was going to be in, honestly. But I guess it worked out for him that he was able to get that so that’s pretty cool.”

On how the offensive line looked after one practice.

“We had so much more time to get ready for this practice. This is by far the cleanest first spring practice that I’ve had in my 17 years as a head coach because we had so many days to prepare for this and it looked really clean. And players were able to execute and get lined up and assignments ad technique and finish. So I was pleased. Obviously tomorrow we’ll look at the tape, but I was pleased with the tempo of practice, the attitude and, for the most part of it, it looked like everybody was where they were supposed to be on each play.”

On the health of his team entering the spring.

“I think we’re in good shape. We have offseason guys that we repair like always but they’re coming along. And there’ll be certain guys that won’t be in spring like Devon Harper, Trace Ford, Collin Clay, guys that we had to repair from the season. They’re doing really well. We’ll turn those guys loose in June. We don’t them to go through spring ball. Alex Hale. We’ll wait til June before we let those guys go.”

Gundy on the distraction of Covid protocols last year and how he seeds 2021 being different.

“We have a very regimented schedule of what we do here and we function on punctuality and we do things daily the same way, and we couldn’t do that a year ago. That’s what’s different now. People are back in the normal flow and a large percentage of our team has already been vaccinated so they can migrate out of the testing procedures which were very annoying for the players. You had to do it but it was still kind of a nuisance to them.

“So I’m thinking in a month to six weeks things will start to move in the direction of being real normal around here. But it’s a lot different than it was last year and that’s helped with everybody’s attitude.”

“… Our players have been very good and now, like the other students on campus, they’ll have a chance to get vaccinated if they choose to then they can help reduce the virus and also eliminate themselves from early morning testing.”

On LD Brown and the running back group.

“That’s a position that we’re pretty deep at right now. We’ve got quite a bit of experience at that position and LD [Brown], we tested last week and he ran 4.37 or 4.39 so he’s rolling pretty good. Lot of experience, been here a long time. Can’t ever replace experience, in my opinion, so it’s good to have him back. Fortunately, we have a number of guys that can take some of the load away from him because, as you know, those guys get beat up at all levels. … That position takes a beating. Hopefully we can keep those guys healthy and not have to take as many hits.”

On getting the younger players more reps this spring.

“Our goal is to get more work with our young players, which would be the threes, than we ever have in the spring because we have 24 more players with us than we have in the past. So we can get them some quality work. And they’ll make a ton of mistakes but that’s the only way you learn.”

“I told you guys a year ago that Spencer needed to calm down and let the game come to him. Relax. He did that on the sidelines. We didn’t have one issue with him on the sidelines this year. Last year we had an issue about every game because he was over competitive and let his emotions get caught up in the game and then you don’t think as well. In his situation, he conquered that a year ago. That helped him play better as the year went on.

“This year, his development in the throwing game, now that he’s learned to control his emotions, will be important through spring and August. Because we all know that he can pull if down or keep it and run and take off and score and can make big plays. So as he now learns to understand what to do with the football and take what the defense gives him it’s just going to give him a chance to become a better player at this level.”