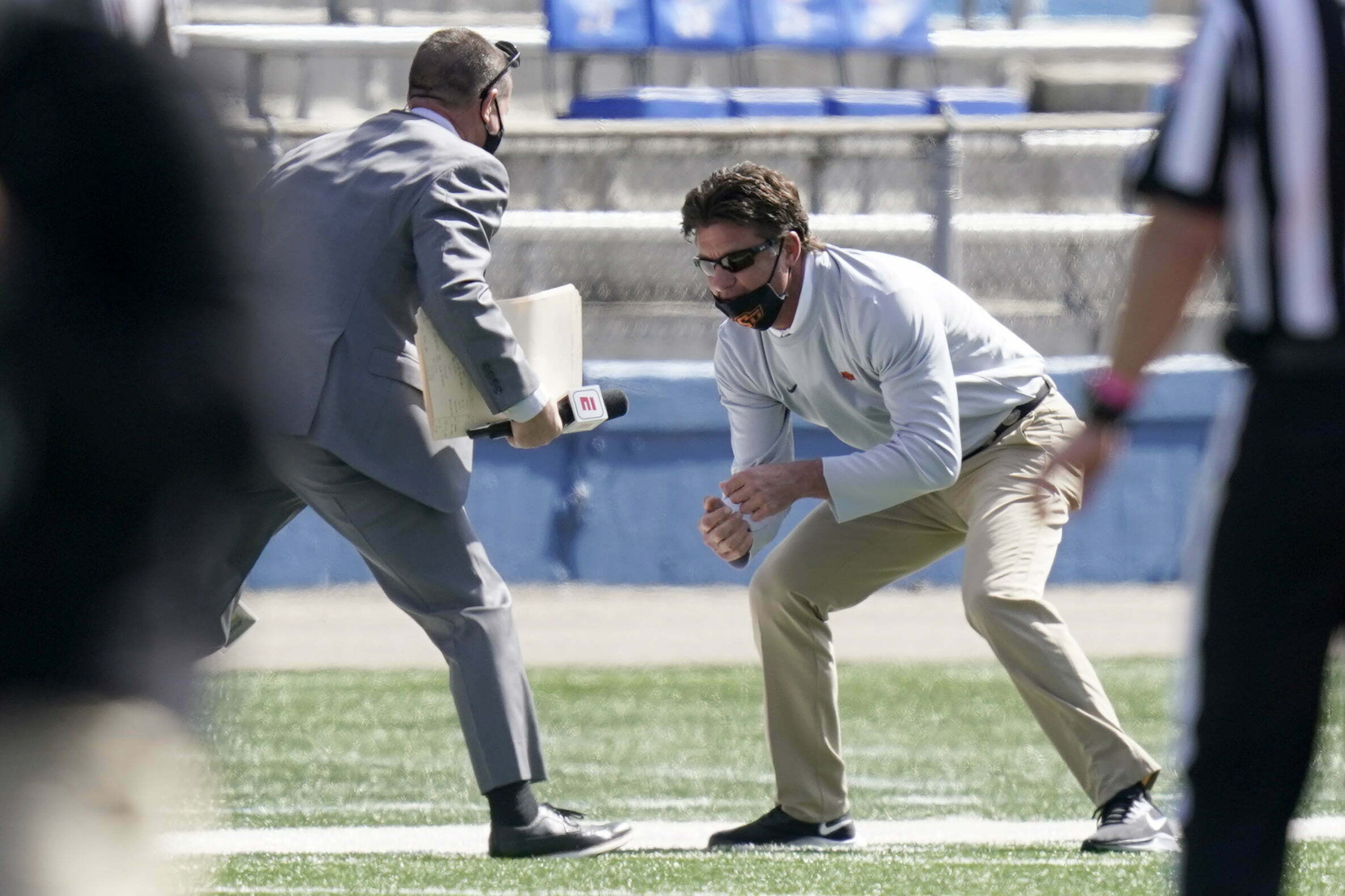 Mike Gundy’s Cowboys put forth their most convincing performance of the 2020 season on Saturday.

Oklahoma State beat Kansas 47-7 to advance to 3-0. After the game, Mike Gundy met with reporters via Zoom. Here is everything he had to say.

“It was a good win for us. I thought that we were consistent across the the board. We rushed the football good, averaged 5 yards a carry rushing the ball. Defensively we played really well. Got an opportunity to play a lot of guys, which was good, a lot of guys that practice hard and commit themselves to this organization. We got to get them on the field, really for a little bit of the third quarter and all of the fourth quarter. It was a good win for us. Guys have come together a little bit, practicing really good. Just gotta keep it going. Get a little bit of work next week, get them some free time, an open week, and move forward.”

“I hope so. He played better today. He was on in most of his reads. We got into a good flow offensively, looked like we used to look years ago from an execution standpoint. That allowed him to improve himself in my opinion.”

“I think they were 1-of-14 on third down, and that might’ve been in the fourth quarter. Being that effective on third down is gonna get you off the field a lot. I thought we tackled through the first three quarters really well. When we had some down-the-line guys in, some of our twos, later we missed a few tackles.

“They’ve come together as a group. They work hard. They’ve got some depth. They run around pretty good. Our schemes seem to be working. If we stay the course, it’ll give us the chance to win a few more games.”

“Well, I feel better about our offense today than I did the last two weeks. We didn’t have to play musical chairs up front. Quarterback got a little bit more experience. He was much better today than he was in the last game, which we hoped that he would continue to make improvements based on experience.

“We rushed the ball for 5 yards a carry. We protected the football better today. We took ourselves out of a lot of drives the last couple games because we put the ball on the ground, and today we were much better.

“We’ve got a lot of work. Charlie [Dickey] has done a nice job with the offensive line, with those guys. It looked like today we blocked pretty well. It’s hard for me to see on the field, but it looked like we covered guys up much better than we had in the first two games.”

“It looked like he ran effective, and he made some cuts. Again, he took good care of the football, which has been very lackadaisical for us as an offense rushing the ball. Today, he was much better at taking care of the football, so that’s a plus. It seemed like he was hitting the holes and making cuts across the line of scrimmage, which is what he does best.”

On Kasey Dunn’s gameplan and how it was executed

“I thought it was a good plan. Obviously it worked. We had 31 points at the half. It seemed like the times we didn’t execute and had to punt, it was us and not necessarily them, which is a good sign. You asked me about his plan, so if we don’t convert on a first down because we had a mistake, then the plan’s good. I felt like the plan was good. Our plans were good throughout the first three games. We just never could get in sync and get rolling as an offense until today.”

On how OSU continues this offensive success moving forward

“We just don’t need to get out of our box. We have three or four days this week that we prepare on basic fundamentals of football, blocking and tackling, footwork, ball control, breaking on a ball, making plays. We need to continue with simplicity to allow our guys to improve at just the basic things that, in our opinion, can help us win a football game. I know it sounds somewhat elementary, but that’s where we are right now. Just continue with basic stuff. I don’t think any of us can forget that we can get hit with COVID at any time and be playing with guys that don’t get as many reps. So if we’re complicated, essentially we’re putting ourselves behind the eight ball. So we’ll try to stay as simple as possible and get some good, quality work this week, let them have some time to regroup as a team.”

“That’s been our DNA for a long time. We haven’t had any the first couple games. With moving the quarterback around and changing linemen, we couldn’t get in sync. Part of what we do is get chunk plays, hopefully. Today looked more like who we’ve been for the last 13 or 14 years on offense.”

“I saw some guys play there. [Brennan Presley] got in a little bit, [Rashod Owens] was in there a little bit.

We had a variety of young guys or guys that haven’t played any real games on defense, which is great. They don’t play as good as you’d want them to. They’ve never been in games. But it seemed like they were running to the ball, trying to make some plays, and that’s how they learn, to get in there, to play. They make mistakes, they get over being in a college football game and hopefully they’ll do better the next time they get in.”

“Knock on wood, they can repair these things nowadays, essentially, some people think better than it was originally. So, you get great medical care, and then it’s up to the young man to rehabilitate himself.

“Tylan is very driven. He was, at sometimes, we felt four to six weeks ahead of recovery just based on his willingness to work hard with rehab. He’s put himself in a good situation. He’s somewhat past the mental part of it, which any time you get injured it works on you mentally a little bit. He’s gotten past that now and is back to just enjoying playing the game.”

On Malcolm Rodriguez and Amen Ogbongbemiga, who got banged up Saturday

“I think they’re fine. I don’t know. They run tests on them and do things tonight and tomorrow morning, but I don’t think it’s gonna be an issue.”

On opening up the playbook

“Well two things, the first thing is we were able to do a little more this week than we have been because the offensive line being in the same spot, quarterback is now in for two and a half games. That allowed him to have some flexibility, and then we’re able to get in sync. When we’re in sync with our offense, it allows us to throw the ball and get a few more chunk plays. That’s the way it’s been for a long time. We never could get in sync for the last two games, so you were without the chunk plays. Today we had rhythm. That allowed us to execute those plays.”

On how much the defensive starters wanted to get a shutout

“They did. They wanted a shutout. But here’s the deal, the young men that got in the game and played today, they’ve been working with our team, just as much as the other guys. I’m always gonna lean toward letting everybody play.

“Sure, we all wanted a shutout, but there’s two things we want to try to avoid: we don’t want to get a starter banged up when we’re ahead by 40 points, and then the other young men deserve to play. Their moms and dads and girlfriends and aunts and uncles want to see them play, and they’ve been busting their butts. So, let them get in there and play. That’s what it’s all about. We’re always gonna stay on the side of letting everybody get in the game and play.”

On the team getting better

“You always want to get better every week. We know that. You hear that. That’s the old coach’s talk, but we’ve improved each week. How do we do that? Simplicity is one. Quality reps. We’re trying to work to build our conditioning up. We’re not in good shape right now, but we’re a little better in this game than we were in the West Virginia game.

“We have a plan to try to build up our wind but not overwork them. I’ve said it three times, but I’ll say it four: it goes back to simplicity to where we don’t have to burn as much during the week, try to get them in good shape and then throughout the season, get a little bit better each game.”