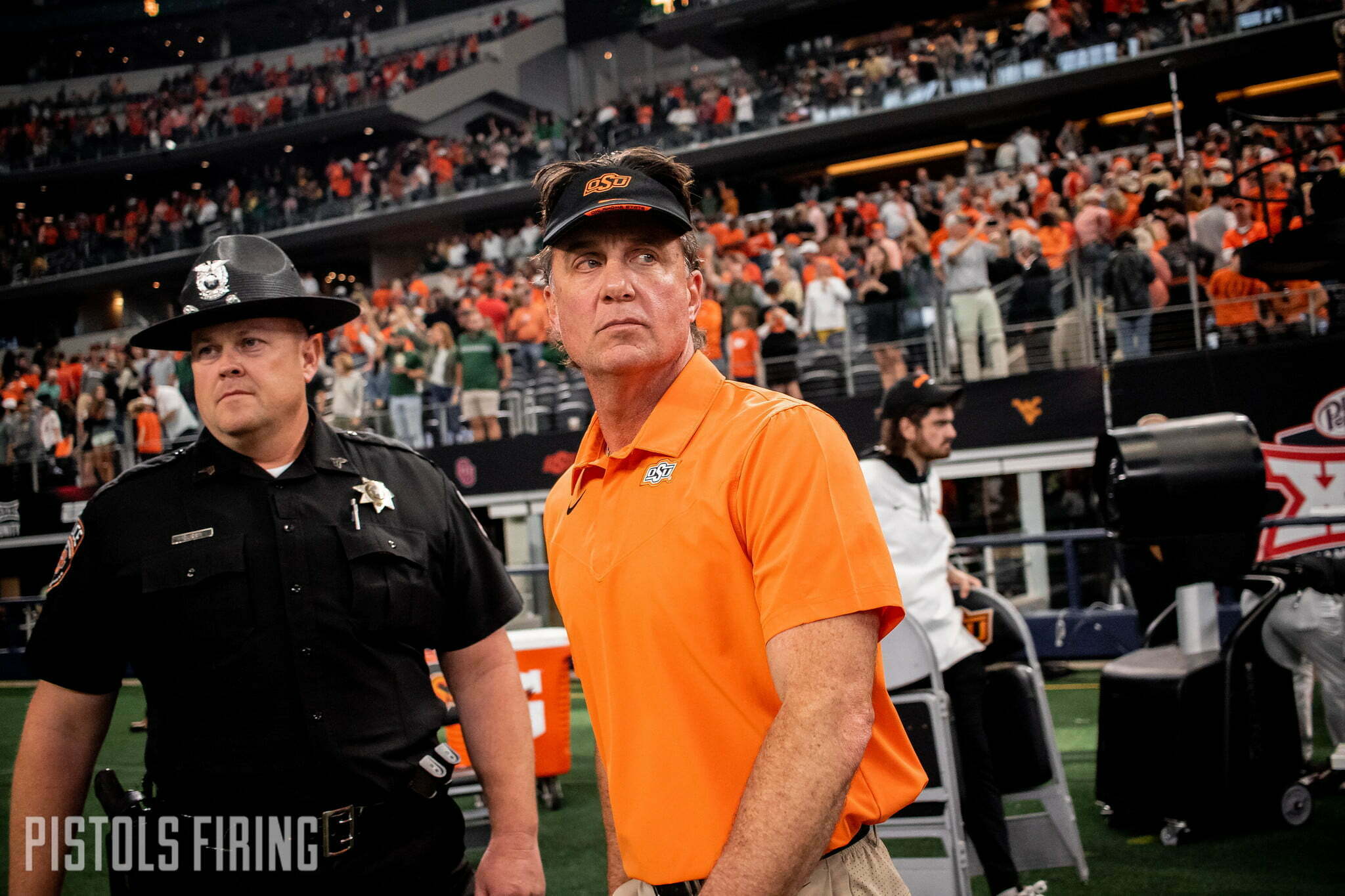 For the second time in his coaching career, Mike Gundy has guided a team to the Fiesta Bowl.

Oklahoma State will play Notre Dame on Jan. 1 in a bowl game the Pokes won after the 2011 season. Shortly after the bowl was announced, Gundy was on a Fiesta Bowl teleconference to talk about the festivities. Here is what he had to say.

“We’re very excited to be involved with the PlayStation Fiesta Bowl. Obviously, we had a tight game yesterday, lost there at the end. We talk about the games being inches, and we ended up coming up an inch or two short. But very proud of our team, the way we competed.

“Got home last night and went up to the office and worked for about four hours and headed home, got some sleep, and then went and got a haircut today, first thing I did. And then did a little bit more work and now just out on the road and trying to find some good players and good people to get back in our program. But I know that our staff and our team is very excited about being in the Fiesta Bowl.”

“I think it’s cool. It’s going to bring a lot of national recognition. We have a team that somebody ended up fifth in the country. So just right there on being in the College Football Playoff. Obviously, the committee feels like that they’re the team that’s just right there. And it will draw a lot of recognition across the country because of their history. But I’m excited about Oklahoma State and the way people recognize us now coast to coast. I think it will be a heck of a football game, a great matchup.”

On if he has ever tried to schedule Notre Dame

“Well, first off, years ago, we tried to work out a series. But what I was told is Notre Dame has been booked up for a long, long time. So it never worked out. I thought it would be great for our fans to be able to play a home-and-home with Notre Dame. And I didn’t realize how far that they’re booked with their schedules.

“And I’ve watched them a couple times, not the entire length of the game. I’m aware they’ve got a running back that’s rushed for about 1,200 yards. Their quarterback has thrown for just under 3,000. I know that they doubled their opponents in scoring average during the year. And they’ve got a fantastic defensive coordinator they named as the head coach. I think it’s a really cool matchup, and we’re looking forward to competing against Notre Dame.”

“Well, with our team I haven’t really had to do much all year. This is a mature group. They’ve handled themselves the right way. They compete each week. We just came up a little short yesterday. But I told them I was proud of them. They’ve done everything that we’ve asked them to do since January. And that’s all we can ask of them.

“When you put yourself in a situation like we were in yesterday, you had really two good football teams playing and, unfortunately, one of them had to come out. If we had two more inches, Baylor would be in the same situation we are now. Sometimes that happens.

“But there’s not anything that happened yesterday that can take away from what these guys have achieved this year. And we’re going to give them a week off, and I fully expect them to come back later this weekend and be ready to go and excited about playing Notre Dame.”

“You know, I saw him after the game. And I won’t see him again until I get back off the road on Friday. And I know that he’ll be in treatment, and we’re hoping to get him better. It was difficult for him to not play yesterday, but we didn’t feel like that he was full speed, and we didn’t feel like that he could protect himself. Running backs need to be able to protect themselves when they’re playing in games with all the hits they take. So hopefully we can get him back.”

“I remember it being a fantastic trip. It’s an unbelievable atmosphere out there. We play in a beautiful stadium. The weather is terrific, practice facilities. They took great care of us.

“And we had a real battle with Stanford. They had the first player picked in the draft at quarterback. They had a defense that had been very productive throughout the year. They jumped out on us. We had to convert either two or three fourth downs in the second half, and then they had missed a field goal to force overtime and we ended up winning the game.

“And, you know, that was a battle of two really good teams. I’m just excited about being back there again. You guys talk all the time to me about doing this forever. I think it’s a tribute to our organization, to our culture, and to our staff to be back in the Fiesta Bowl 10 years later. That’s pretty cool.”

On how OSU has come to have a successful defense

“We made an adjustment four years ago, I believe. We moved over three scholarships from offense to defense to load up a little bit there, felt like that would help us long term in our conference. With all the fantastic quarterback, receiver, running back, offensive play that we’ve been getting the last 10 years. it was tough to slow people down. We felt it could help our special teams.

“Now looking back, we felt like that was a really good move. We hired Jim Knowles to be our defensive coordinator. And we put our staff around him and our players have rallied around him and they’ve done a great job. And I’m satisfied with the move. I think it’s certainly benefited our team and hope it can continue that way for the next few years.”

“We just found out a couple hours ago or so that we were playing them. And I had seen them–I don’t remember–at some point, maybe watched a quarter or part of a quarter a couple of times. And I said earlier that, you know, I know they have a running back that’s rushed for about 1,200. Their quarterback (Jack Coan), he transferred from Wisconsin. I watched him play a little bit. You know, they used a lot of tight ends. They’re very skilled and they have good players. I mean, really good players go to Notre Dame. And I know Coach [Brian] Kelly left and went to LSU and I know Coach [Marcus] Freeman is there now. But, as all we know, essentially players play in the games and not coaches. And with them hiring within, their system will stay pretty tight, would be my guess, up through the Fiesta Bowl.

“We’re going to be playing a really talented team. The committee voted them fifth. They were just right on the verge of being in the playoffs. So, you know, I guess the way you look at it, you’re getting ready to play a team that could have been in the playoff.”

“Well, I think it’s awesome. We want our players to trust the coaches. And, obviously, they trust Coach [Jim] Knowles. Blank checks are a little much. I don’t know that I can go that far in making decisions.

“I can tell you that our president and athletic director would love to keep Coach [Jim] Knowles in Stillwater. And he and I developed a great working relationship. I think he’s a very smart football coach, and I really think he likes Stillwater. So we’re in the process today and, really, some over the last couple weeks of trying to work out a deal to keep him here. I think it’s best for Oklahoma State football, and I think Coach Knowles wants to be here. It’s not quite as easy as just giving somebody a blank check. There’s a lot of details involved in that, but we’re working hard to keep him in place.”

On having this group together for a final game

“These guys are fun to coach. … When I’m there, I don’t very seldom talk to anybody for two hours. I don’t have to. They take care of themselves. They enjoy the game. They like the Xs and Os. They like the grind of it. I would like to play a lot more games with this team. They’re fun to be around. They’ve made my job enjoyable every day. They’re a special group.

“And they were in a lot of pain yesterday after the game. And that’s the way you want it to be. But when we get back together on Friday or Saturday, they’ll be in a good frame of mind. We have enough leaders to get it rolling. And they’ll be excited about playing Notre Dame. I know all of us are. And I think it’s cool for our fans.

“We should have a lot of fans out in Phoenix, in Glendale. In a matchup like this with the No. 5 and No. 9th ranked team in the country in a big-time bowl like the PlayStation Fiesta Bowl, I’m expecting that we have lots of orange out there. We’re all looking forward to it over the next few weeks.”