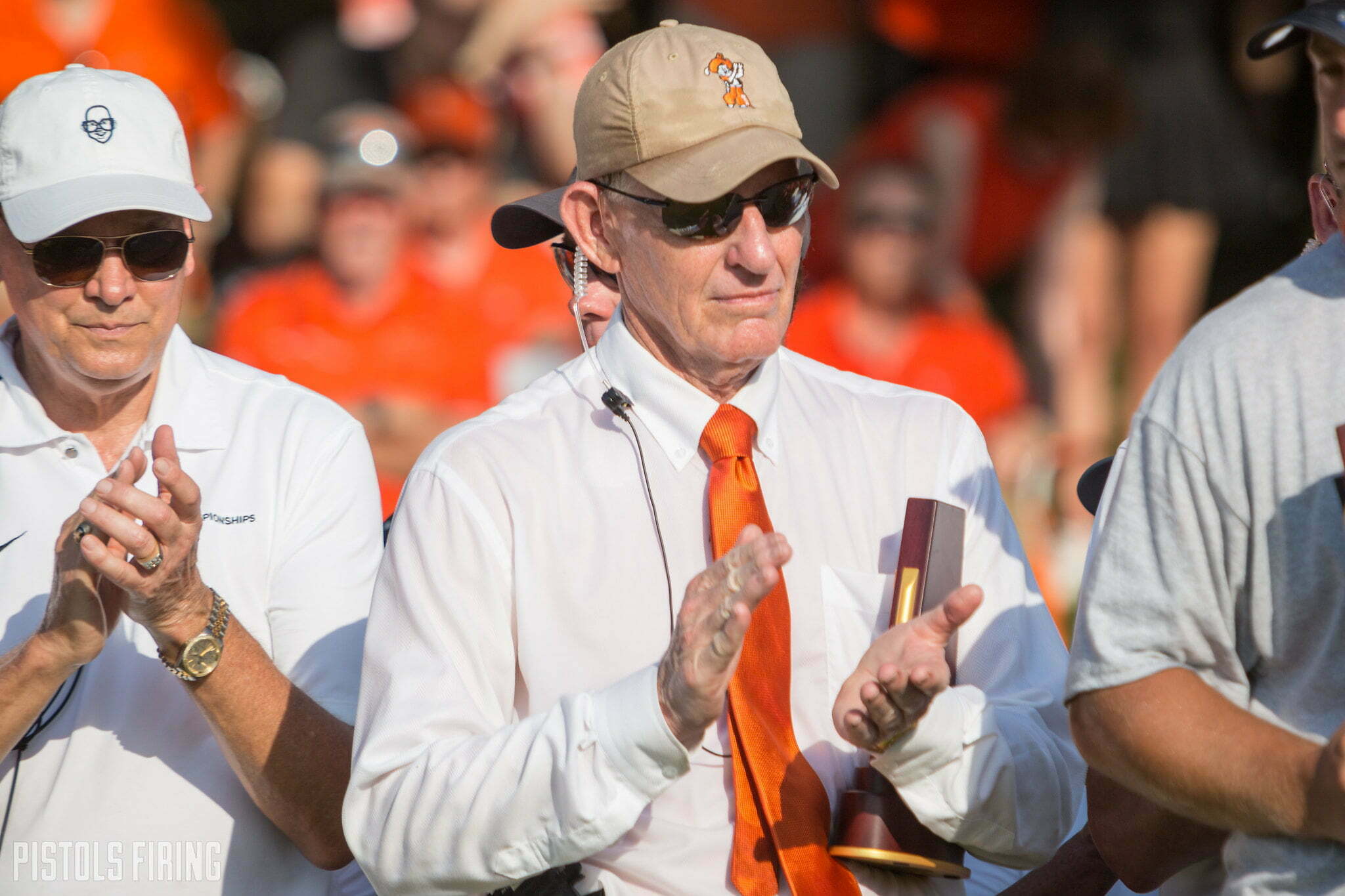 Earlier this week, John Daly went on Sports from the Sidelines on SiriusXM and told maybe the greatest story about OSU golf that has ever been told.

“So the greatest coach that ever lived in golf was Mike Holder at Oklahoma State, and I went [to Oklahoma State] for a recruiting visit,” said Daly. “And he says, ‘If you can pin me, I’ll give you a full scholarship.’ Of course, I threw that down in less than two seconds. But I said, ‘You know what, coach, I’m a Razorback, I’m going to the hogs. I don’t need Oklahoma State.’ That’s my wrestling thing.”

I have … a lot of questions. The first, I guess, is whether John Smith was there and whether he refereed the match. Did Daly literally try to pick him up? Did Holder run around for a little bit or did he try and go at him right away? Was there a mat? Were they inside? Outside?

Daly had a nice college career and would have played alongside guys like Tim Fleming, Brian Watts and Michael Bradley at OSU. But it’s probably for the best that it didn’t work out.

Here’s how his career at Arkansas went.

John’s hard-charging lifestyle didn’t hamper his game, however. He won the 1984 Arkansas Amateur, and the Missouri again, relying on his prodigious distance and surprising touch around the greens. Steve Loy, the golf coach at the University of Arkansas, was impressed enough to offer John a half-scholarship. He accepted, and made his way to Fayetteville.

At Arkansas, John majored in golf, with a minor in partying. On the course, Loy liked everything about him, except for his weight. At 5-10, he carried more than 225 pounds. Though John was one of the team’s best players, Loy often put him through the paces. Sometimes, when John qualified for a road trip by out-playing teammates, his coach would make him do something additional, like challenging him to hit a drive in the fairway.

John grew to hate Loy. Rather than try to please him, he would purposefully fail. In John’s junior year, Loy demanded that he adhere to a strict diet. If he didn’t, his spot on the Arkansas team would be in jeopardy.

John agreed, then found a unique way to shed pounds. He stopped eating as much he had been, and started drinking even more hard alcohol. Always a fan of beer, John realized that Diet Coke and Jack Daniel’s was the ultimate weight-loss method. As he got closer to Loy’s target of 170 pounds, people began telling him how good he looked. In turn, his self-esteem rose, and his game improved. John became accustomed to playing good golf with a healthy buzz on. [Jock Bio]

The most surprising part here might be that he apparently took a half scholarship from Arkansas in lieu of a full one from OSU (again, no idea if that’s actually true, but this is how it’s framed by Daly and the writer below — and is confirmed here).

As for the John Daly college experience, I can see Mike Holder, um, not being real excited about how it played out and Daly’s time in Stillwater not going all that well.

Still, I would pay some real American dollars to see an 18-year-old Daly getting after a 36-year-old Holder and trying to pin him. Even if that’s not exactly the way the story went, it’s the way Daly tells it.