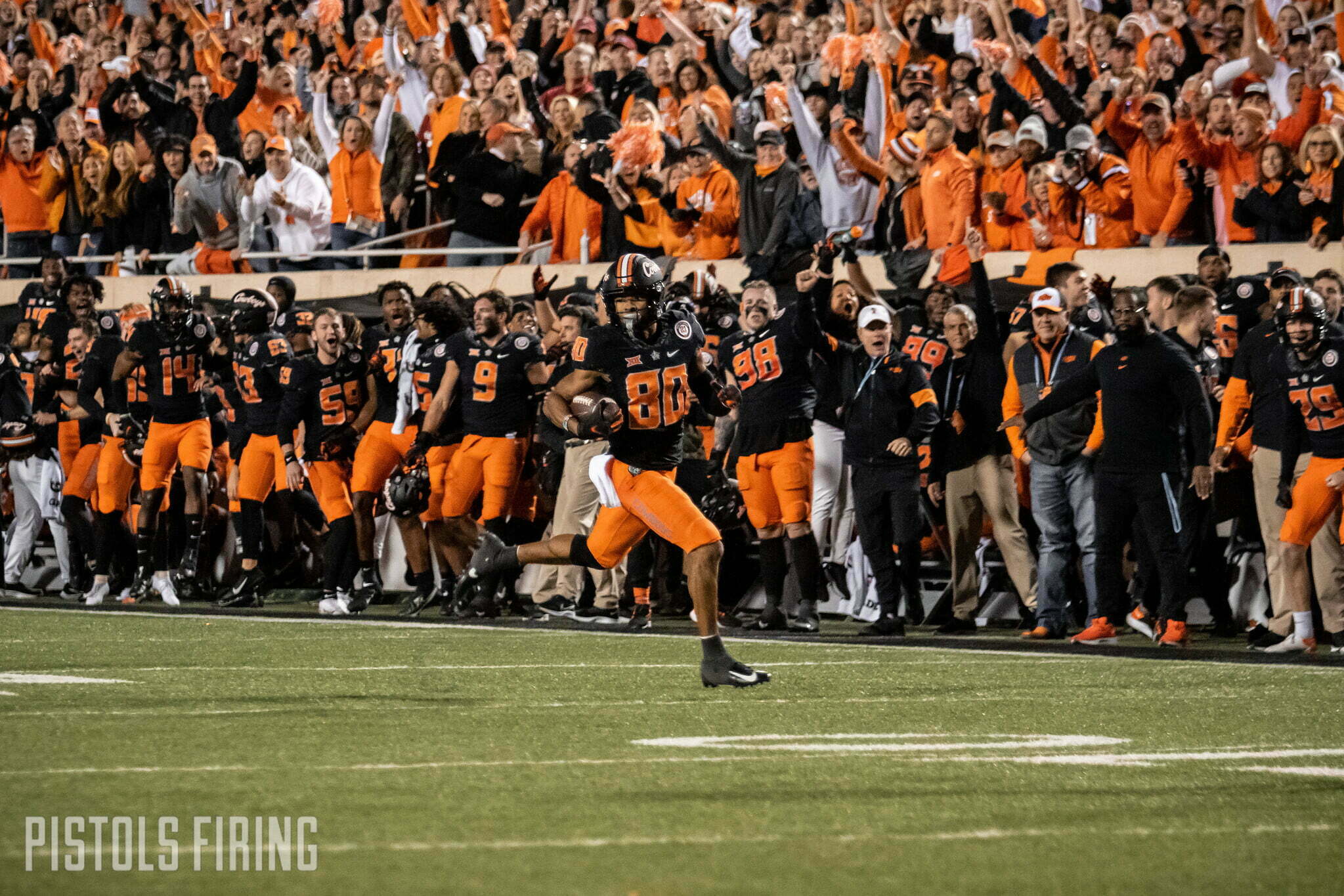 The 2021 season will go down as one of the best in Oklahoma State’s history.

From the 6-0 start to the Bedlam win to the Fiesta Bowl win, there wasn’t a shortage of outstanding plays from the Cowboys this season. Here are the 10 best from the year that was.

The unlikeliest of heroes: Cale Cabbiness.

OSU’s offense struggled in Boise with an already young receiving corps further hampered by injury. The Cowboys held a 21-20 lead with less than two minutes to play but needed a first down to run out the remainder of the clock. That’s when Spencer Sanders dropped back and floated a pass up to … No. 37. Media members in the press box scrambled for their roster sheets as Cabbiness won his one-on-one battle and secured a 24-yard completion, which allowed OSU to kneel out the rest of the clock.

It was Cabbiness’ only catch of the season, but it was one play that was the difference in OSU getting to play in the Fiesta Bowl at the end of the year.

Just before Sanders heaved that ball to Cabbiness, Jason Taylor saved the Cowboys’ unbeaten start by the tip of his finger.

The Cowboys’ season has been one of inches. The inches of Taylor’s fingers, the inches short in Ames and the inches short in the Big 12 Championship. This one was in OSU’s favor, as Jonah Dalmas’ kick was blocked ever so narrowly in the final minutes of the game to preserve the Cowboys 21-20 lead.

The first of three entries where I cheat and put two plays in one, the Cowboys had a pair of outstanding catches in Ames, despite the game’s result being unfavorable to the Pokes.

The first earned Brennan Presley a spot on Randy Moss’ “You Got Mossed.” With time dwindling in the second quarter, the 5-foot-8 Brennan Presley skyed over a pair of Cyclone defensive backs to give the Pokes a lead to take into halftime. It was Presley’s second touchdown of the day.

The second highlight play put OSU back in the lead in the fourth quarter. Spencer Sanders threw perhaps his best ball of the season. He put it on a rope from about 30 yards away to Tay Martin in the corner of the end zone. Not to be outdone on the play, Martin also did an excellent job of dragging his feet inbounds.

There weren’t a ton of standout plays from the Cowboys momentous comeback in the Fiesta Bowl. For the most part, it was just good, solid football.

First came Kolby Harvell-Peel. Notre Dame running back Logan Diggs had a three-yard gain in OSU territory until Harvell-Peel ripped the ball from Diggs’ hands. It was a textbook stand him up and rip it away from him.

The Fighting Irish found themselves back in OSU territory a few possessions later, but this time Malcolm Rodriguez intercepted a Jack Coan pass over the middle.

After a dreadful third quarter in this year’s Bedlam game, the Cowboys needed a spark, and they got one from QB1.

Trailing 33-24 after a safety and a muffed punt turned OU touchdown, Sanders ignited the Boone Pickens Stadium crowd with a 37-yard touchdown run that capped off a seven-play, 58-yard scoring drive. It pulled the Pokes within two points, points they would later get from a Jaylen Warren 1-yard run.

5. Warren Makes All of Tulsa Miss

If your phone number starts with a 918 area code, chances are Jaylen Warren left you in the dust in his fourth-quarter touchdown against the Golden Hurricane.

On an outside run play, Warren broke a tackle behind the line of scrimmage which forced a detour. He cut back, leaving two other Tulsa defenders grasping at a ghost. Then he cut back to the outside leaving four defenders tripping over one another.

Warren had a lot of hype through spring and fall camps, but that was the first time the public got to see what all the hubbub was about.

4. Warren Gets the Pokes on the Board in Boise

Warren’s score against Tulsa raised some eyebrows, but OSU fans knew they had a dude after his performance in Boise the next weekend.

The Broncos scored on its opening two possessions of the game, and OSU managed only two yards on its first series. Down 10-0, things looked quite dicey for the Cowboys … until Warren went 75 yards untouched on OSU’s first play of its second series.

Warren finished the game with a career-high 218 rushing yards.

The Cowboys were getting whooped on pretty good in Austin, and just as the Longhorns were about to put the final nail in the proverbial coffin, Jason Taylor struck.

Spencer Sanders had just thrown an interception with the Cowboys already down 17-3. Texas had the ball in red zone, threatening to go up 24-3 when Taylor jumped a route an made an 85-yard house call. The score breathed life into the Cowboys, as they went on to win 32-24.

Another two-plays for the price of one, the Cowboys’ defense made a pair of heroic stands late in their Bedlam win worthy of high praise.

The first of which came with less than two minutes to play. The Sooners had the ball in OSU territory trailing 37-34. It was 4th-and-10 after Devin Harper made a sack on 3rd-and-5. OU quarterback Caleb Williams bought time in the backfield until Harper narrowly missed a sack around the 50-yard line. Harper got up from his belly and chased Williams down at OSU’s 35, five yards short of the marker.

The Cowboys were forced into a similar situation a few minutes later. With seconds remaining, the Sooners had the ball on OSU’s 24, needing a touchdown. It was 4th-and-10, but before Williams could even get a pass off, freshman edge rusher Collin Oliver army crawled to the quarterback’s ankles and brought him to the BPS turf, securing the Pokes’ win.

The plays were good plays on their own, but rather than a superior athlete making something look easy, both plays showed grit. To use a Mike Gundy buzz word, both showed the Cowboy Culture.

Special teams returns always seem to play a big part in Bedlam, and that was the case again in 2021.

Presley got close on his first kick return of the night, bringing the ball out 42 yards before he was brought down. But on attempt No. 2, he was gone.

Boone Pickens Stadium erupted, and it was one of those eruptions where there was a good cheer as he made it to about the 30, but then he shed a tackle and another wave of cheers broke out. Then he cut into the open field and everyone was going bonkers.