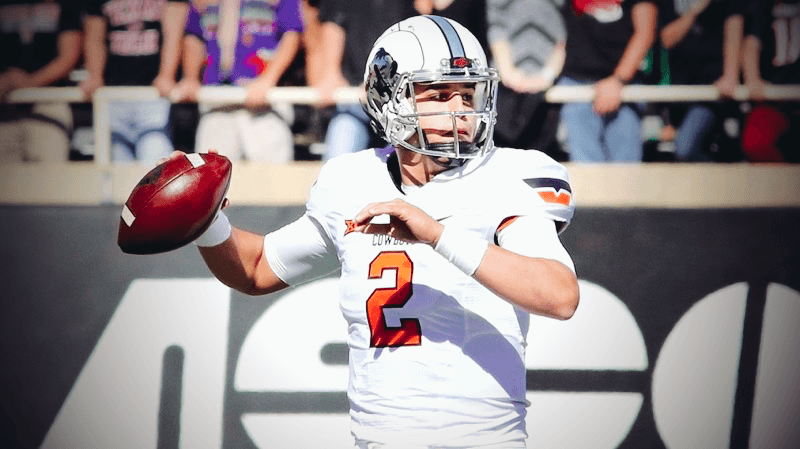 I’ve been thinking about this for a few weeks now. I would imagine Mike Yurcich has too. In an effort to solve its atrocious run game, Oklahoma State has turned to somebody who’s not even listed as a running back on the depth chart.

J.W. Walsh might be a QB in your media guide, but make no mistake, he is Oklahoma State’s strongest, best and most effective runner.

When he replaced Mason Rudolph in the second half in Lubbock on Saturday, Twitter was filled with “see, this is the dude we should roll with.” Those people are missing the point. Mason Rudolph is a college football quarterback, a fine one at that. J.W. Walsh is a running back who throws the ball every once in a while. There’s a difference. You can probably be good with one or the other, but you’re better with both, especially given the state of OSU’s run game.

“He helps us run the football because he’s the extra guy,” said Gundy on Saturday. “You have to defend him. We need some help as we move along to try to get better in running and rushing the football.”

“He’s getting better. J.W. is like the energizer bunny. You have to tell him slow down a little bit. He’s so excited. He wants to do it, and he wants to run through the wall. So we have talked to him about the Kansas State theory over the last few years of how their quarterback slides and slides and slides, and lets the play develop. He’s getting better. If you go back and look weeks ago, he’s too fast. He’s running through there before the play could develop.”

Walsh’s splits from the last two years are as follows.

Walsh threw it five times on Saturday in a shootout in which he played half the game. Five times. As Robert Whetsell pointed out (and ESPN’s QBR stat confirms), that’s pretty much the perfect split.

The only potential issue here is QB1 having a bad attitude about the whole thing. I wouldn’t blame him — I want him to be pissed that he’s being taken out — and he seemed a little annoyed in his interview after the Tech game.

But I’m also confident that he and Walsh have a good enough relationship that it won’t matter that much in the end.

“I know it’s got to be tough,” Walsh told the Oklahoman. “Especially (the Kansas game), he played phenomenal and he got the offense down close to the end zone a few times and he got pulled and I went in. I know that’s got to be frustrating. But he doesn’t act it. He doesn’t show it.”

What these two have shown is an ability to elevate what should probably be an average OSU offense to one of the 10-15 best in the country at this point in the season (OSU is No. 12 nationally in points per drive).

“We think that it’s almost like preparing for two different offenses,” said Gundy. “We have plans for him. I had mentioned this to you guys, that we weren’t using him enough, and it wasn’t anybody’s fault. Mason was doing just fine.”

There is no QB controversy in Stillwater and there won’t be for the rest of the season. There are simply two athletes playing QB that, if Mike & Mike mix and match appropriately, could be putting their hands on a big trophy here in four weeks.