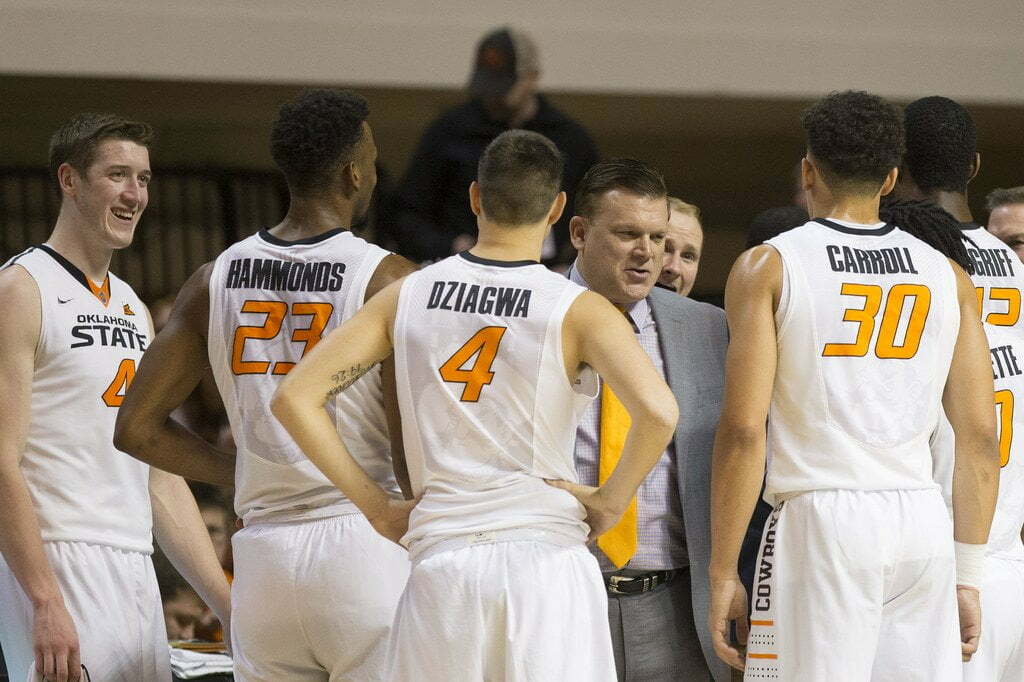 By Thomas Fleming and Sam Aldrich

On Wednesday night Oklahoma State freshman guard Thomas Dziagwa continued his stretch of impressive play, pouring in 14 points in 22 minutes, on 4-7 shooting. Dziagwa made Arkansas-Pine Bluff pay all night from 3, going 4-6 from beyond the arc and raising his 3-point percentage for the season at 51.1 percent. Too much sauce.

The shooting guard and coach’s son from Temple Terrace, Florida has gotten more minutes the last few games since Phil Forte and Jawun Evans have both picked up injuries — Evans with a nagging shoulder and Forte with a bad back.

Dziagwa’s production, while not against the best competition, has increased as his role has expanded in recent weeks. He has proven himself as a spark off the bench, and he has become the biggest deep threat on the team so far this season, yes, even more so than Phil Forte.

He has scored a combined 25 points in 41 minutes on 58 percent from 3-point land in the Tulsa and APB games. That’s some serious heat from a freshman that we weren’t sure would even play against meaningful competition this season.

However, Dizzy has quietly been doing this all season, when given the chance. Check out his stats/40 minutes this year.

Those are impressive numbers, folks. It’s hard to ignore anyone who averages over 24 points a game/40 on over 50 percent from 3, including 6.5 3s per 40 minutes.

It is also worth a double take when you factor in that Dziagwa has averaged just 9.5 minutes/game this season. This is not a player that should have his playing time diminished when Phil/Jawun are back to full strength and the schedule gets much tougher (starting Saturday at Wichita State).

It may not be completely fair to compare Dizzy to Phil Forte III, the Cowboys’ starting shooting guard who has a chance to become the school leader in 3-pointers made this season. But let’s see how Dizzy compares to our beloved Phil in a couple of advanced statistics so far in 2016. You might be surprised.

BPM is box plus/minus. A box score estimate of the points per 100 possessions that a player contributed above a league-average player, translated to an average team.

His defense is still below average, but the freshman sharpshooter is an astounding 11.1 points per game better on offense than the average college player, which boosts his overall box plus/minus. While were at it, who are the top 5 in overall BPM on the team?

That’s a line-up of a two guards, two forwards, and a center that is a combined 37.1 points per game better than average. In Brad Underwood’s system of constant substitutions and pressure defense, it doesn’t matter a whole lot who starts the game, but who finishes it. If you’re looking for Oklahoma State’s current lineup of death, you’ve got it in Jawun/Dizzy/Shine/Carroll/N’Guessan.

We don’t think anybody is advocating that Dziagwa should be starting over Forte or anything like that, but there’s certainly a case to be made for the freshman scoring more minutes moving forward. This is what Dziagwa had to say about staying ready at Wednesday’s post-game press conference.

“I just stay ready, try and contribute in any way I can — if it’s cheering on my teammates or if it’s knocking down threes or getting steals — I just try to contribute and play my role to the fullest,” said Dziagwa. “Whatever coach asks of me, I do.”

Dziagwa has a level of confidence that is rarely found in a first-year player, and it has translated on the court. Fans saw that not only in Wednesday’s double-digit performance but also when he hit two clutch free throws in the final seconds of the Tulsa game to ensure the win.

Whether Dziagwa will continue to see increased minutes is unknown, but we know Underwood is not afraid to call on him when he’s got a problem. The freshman has shown why he was so highly touted coming out of high school and will undoubtedly serve as a valuable role player for the Cowboys this season.