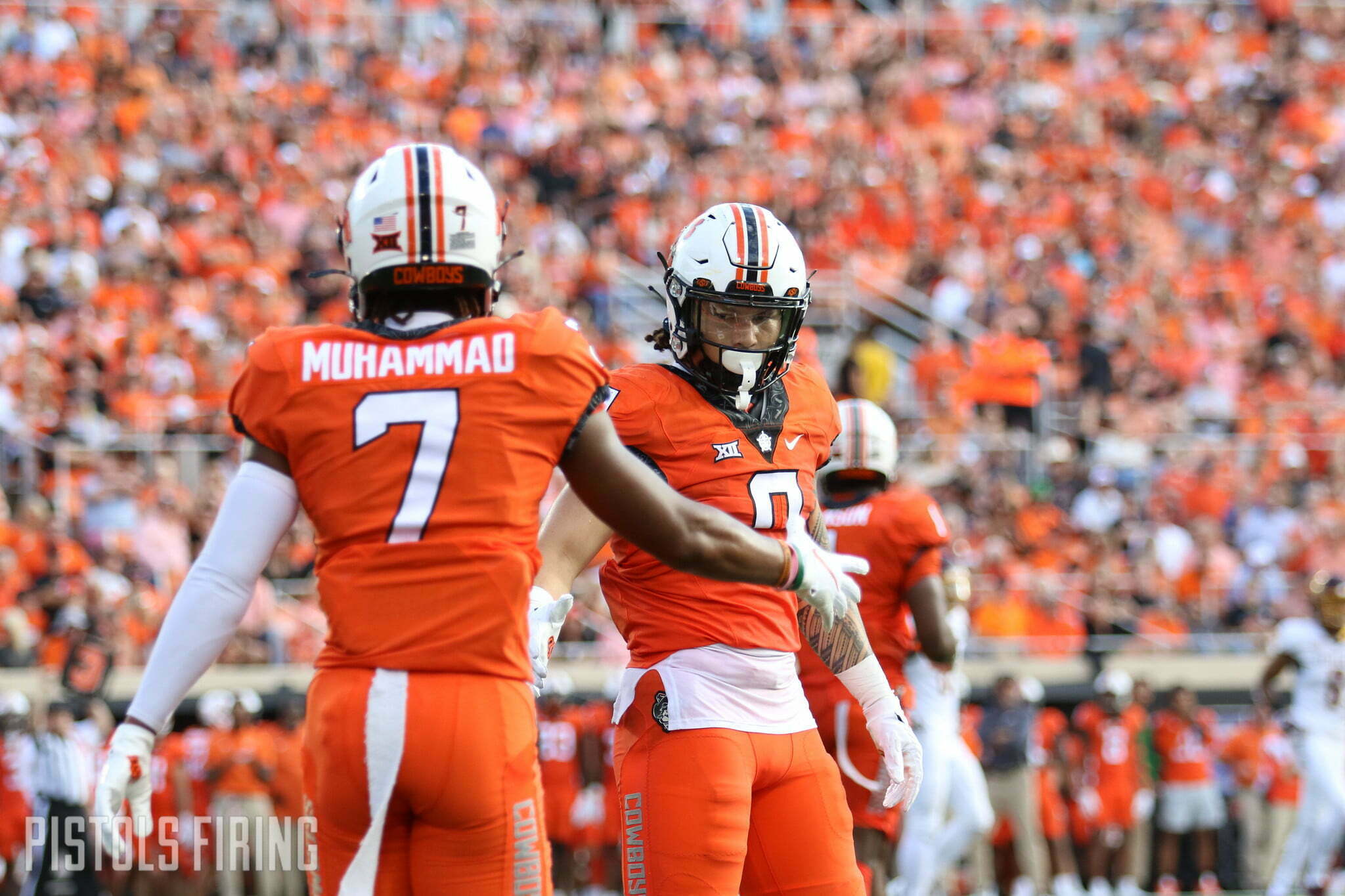 Oklahoma State earned a win against Central Michigan despite a sloggy second half in which starters had to be reinserted for second- and third-string players at the end. The Cowboys might need more than two quarters of quality football to make it to 2-0 with a Power Five opponent in Arizona State coming to town.

As they prepare for a Saturday night tilt with the Sun Devils, here are three questions the Cowboys will need to answer.

How to Corral Another Pair of Dynamic RBs?

But the Cowboys will have another pair of rushers to worry about in Arizona State’s Xazavian Valladay and Daniyel Ngata. The former transferred from Wyoming where he rushed for over 1,000 in two of the previous three seasons. He was a major key in the Sun Devils’ thumping of Northern Arizona, racking up 116 yards and two scores (at almost eight yards per carry) in his Power Five debut. You can bet he’ll be keen to make a similar impression in Stillwater.

Who Keeps an Eye on Emory Jones?

The Cowboys’ young linebacker corps will get its first look at a QB with wheels when they stare across the line at the former Florida Gator. Jones was a Top 100 talent out of high school, and had a quiet but effective coming out part last week.

Jones wasn’t necessarily impressive through the air against Northern Arizona, but he didn’t have to be in the 40-3 rout. He was an efficient 13-of-18 for 152 yards, no scores or picks. But he carried the ball 11 times for 48 yards and two scores, a la Spencer Sanders. Mike Gundy called Jones “another running back back there throwing the ball.” But don’t be deceived by his pedestrian numbers in Week 1, Jones can sling it.

“We have to control their quarterback first. He’s a good player,” said Gundy. “He throws the deep ball really well and makes plays with his legs. If you don’t contain him, he’s gonna take off and run. He can really hurt you. Most of my meetings with the coordinators getting into that type of information would be tomorrow morning, but just from what I see, I’m gonna guess the first thing we need to do is control their quarterback.”

The back half of the Cowboys’ defense experienced some growing pains against Central Michigan and a more statuesque passer in Daniel Richardson. They’ll need to keep their heads on a swivel for a legit dual-threat in Jones.

What Will We See from Arizona State’s Defense?

Gundy alluded to Herm Edwards’ coaching style and that of his plethora of NFL staff like OC Glenn Thomas, DC Donnie Henderson and analysts like former NFL head coach Brian Billick and Marvin Lewis. But his familiarity with the staff and the Sun Devils’ win in Week 1 did little to inform Gundy of what to expect Saturday night.

“Last year, a lot of pressure, a lot of cover-1 and stuff. Not so much the other night,” said Gundy of ASU’s defensive look. “Maybe they just said we’re playing Northern Arizona, we’re gonna play base the whole game and not show anything for the next game. That could be their thought process also. Special teams-wise, completely different last year than they were Thursday night.

“So maybe real vanilla against Northern Arizona to not show anything, and then be considerably different or similar to what they were last year against Oklahoma State. Because they have the same guy doing it. (R.C.) Slocum’s boy’s doing it. His son (Shawn), he’s running their special teams. They might have some changes based on what’s happened, and then maybe they’re not really. We won’t know that, so we kind of have to prepare for both.”

Regardless of which looks they get, the Sun Devils will present a challenge (and a step up in talent) on both sides of the ball. The Cowboys will need to be ready.