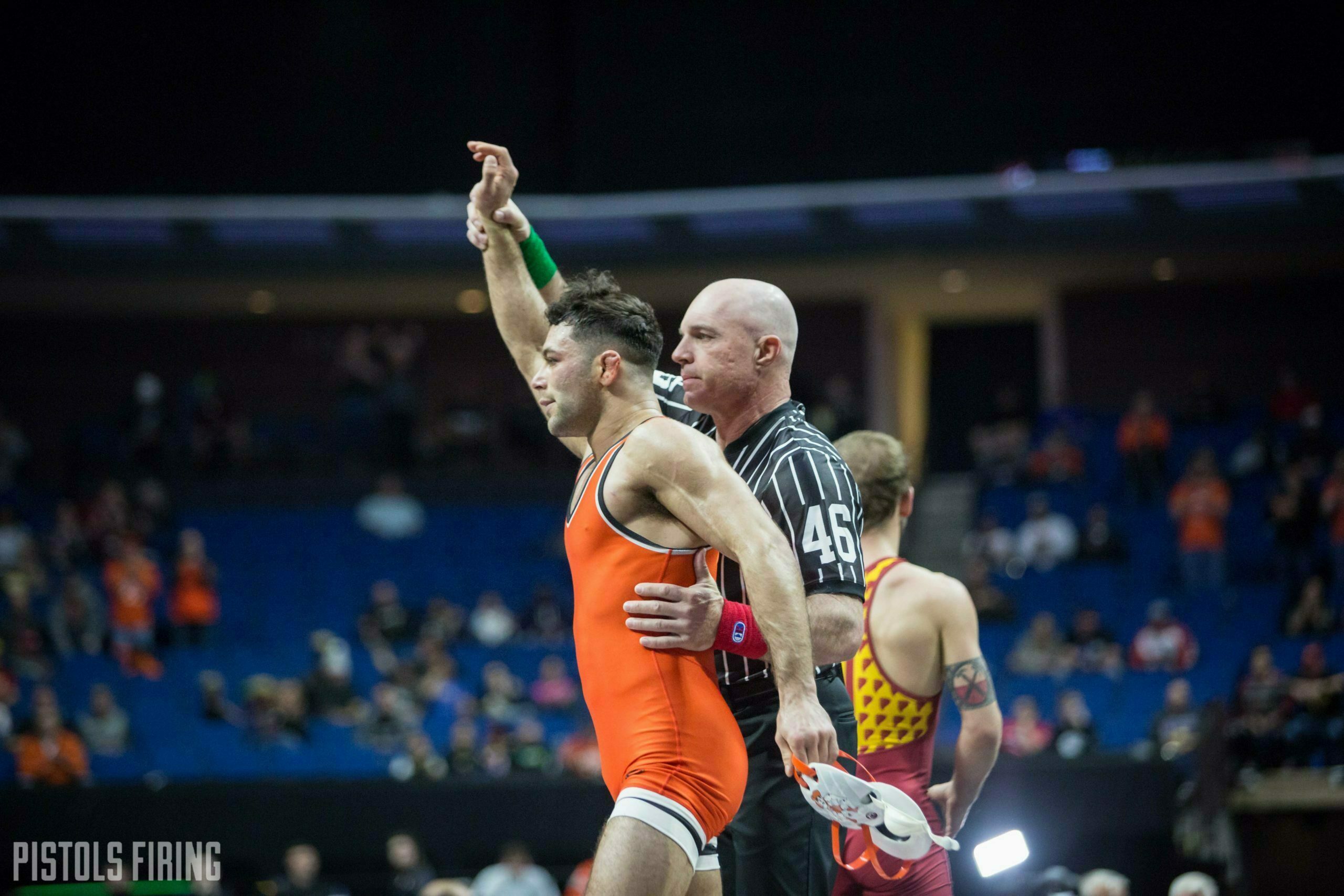 TULSA — In what was considered a down year for the Oklahoma State wrestling team, the Cowboys won another Big 12 title by 31 points.

Nick Piccininni, Boo Lewallen and Travis Wittlake claimed individual gold Sunday night in the BOK Center, as the Cowboys won the conference crown for the eighth straight time. That’s the most since 1921-28, almost one century ago.

“Those are important stats for the program,” OSU coach John Smith said. “It’s something we haven’t done since 1928, 21 through 28. Anytime you tie or break a record at Oklahoma State in wrestling, you’re doing something. I’m glad this team got to feel a little of that this year. Little bit of a struggle for us, but we did wrestle our best that we’ve wrestled all season.”

Piccininni kicked off the evening’s festivities at 125 against Iowa State’s Alex Mackall. It was Piccininni’s fourth Big 12 title, making him the ninth wrestler in program history to win the tournament four times (latest was Anthony Collica in 2017). He also took home the tournament’s Most Outstanding Wrestler award.

Piccininni scored a takedown late in the first period, escaped at the start of the second and gave up an escape in the third to capture a 3-1 win. Despite dominating the division since he has gotten here, Piccininni wasn’t all that excited on the slow pace of his final Big 12 bout.

“I didn’t open up like a should have,” Piccininni said. “Kind of stayed back a little bit. That’s just not really the way I want to wrestle. Not really too proud of my performance, but it is what it is. I’m moving on. Now it’s time to look forward to the NCAA Championships. That’s where I’ll showcase everything and keep getting better. That match was what it was. I think that was just a poor performance on my part.”

The Cowboys had a rare two-match break leading up to Lewallen’s bout against South Dakota State’s Henry Pohlmeyer.

Pohlmeyer started on the offensive, nabbing a first-period takedown. Lewallen escaped as he did at the start of the second period to tie the match at 2. But then Pohlmeyer took Lewallen down again. Lewallen escaped setting up a big sequence for him to end the match’s middle period.

Trailing 4-3, Lewallen scored his first takedown of the match and was able to ride out the clock to take a 5-4 lead into the third. Pohlmeyer tied the match again with an escape, but Lewallen took him down and rode out the period again to clinch an 8-5 victory.

Lewallen’s OSU career has been marred by injury. He won Big 12s in the 2017-18 season, but he missed most of last season and was given a medical redshirt before returning to claim his second conference crown.

Wyatt Sheets was the only Cowboy who entered the finals as an underdog. He entered the 157-pound final as the third seed taking on top-seeded David Carr out of Iowa State. In their dual meeting this year, Carr beat Sheets with a 14-6 major decision, but even in defeat, Sheets showed his progression in Tulsa.

After a scoreless first period, Carr got an escape and a takedown to start the second. Sheets escaped after 53 seconds of riding time to enter the final period down 3-1.

Sheets escaped in just five seconds at the start of the third, keeping the riding time to under a minute and trimming Carr’s lead to 3-2. From there, though, Carr scored another takedown and with it went up 5-2. Sheets eventually escaped and chased Carr all around the mat in the center of the BOK Center. Carr gave up a stalling point, but won 6-4 with riding time.

“[Sheets] knew the gameplan,” Smith said. “We needed to get a takedown. You need to get takedowns to win a match. He struggled getting that. He was in deep on a double-leg once, and Carr did a nice job of peeling him off.

“Good effort. No disappointment with him. He’s slowly just kind of piecing things together in what he’s capable of doing.”

Wittlake was next as he secured his first Big 12 title in just his redshirt freshman season.

He was dominant in his scrap with North Dakota State’s Andrew Fogarty. Wittlake went into the third period with a 5-1 lead and 1:12 in riding time. He scored his third takedown of the match in the third period and won 8-4.

“Nick’s a great leader on the team,” Wittlake said. “He’s always doing the right thing. He’s one of the hardest workers in the room. Every day he comes in and he’s ready to scrap. It’s awesome to be able to have a guy like that on the team. Yeah, I hope to four-time as well.”

OSU will send wrestlers in every weight class except heavyweight to nationals. The NCAA Championships start March 19 in Minneapolis.