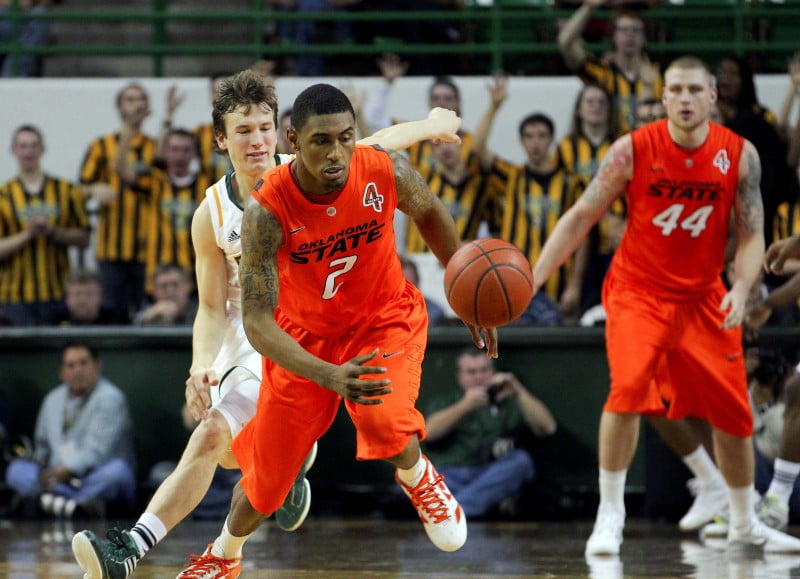 CBS college basketball blogger, Jeff Borzello joined me recently to chat about OSU hoops. You should read the fantasy draft he recently did with Norlander, Gary Parrish, and Jeff Goodman.

Consistency. Let’s face it, when Oklahoma State is hitting on all cylinders, they have enough to talent to battle anyone in the league. Le’Bryan Nash showed flashes of his enormous potential last season, but he also had too many 3-for-15 outings, 2-for-12 games.

I think the addition of Marcus Smart is going to make a huge, huge difference. The kid is a born winner and leader who will do whatever it takes to win. He’ll also add stability to the point guard spot.

Keiton Page was a shooter, Cezar Guerrero was enigmatic and Markel Brown is certainly not a true point guard despite leading the team in assists.

Smart will solidify that position and also bring leadership. How Nash and Smart mesh on the perimeter is going to be the key to the season. Both are supremely talented, but they go about their business in different ways.

2. Brian Williams is done for the year, how much should this adjust expectations for OSU?

It’s an important loss because of his athleticism, but I think Oklahoma State can overcome his injury — if they stay healthy.

Travis Ford can either go small with J.P. Olukemi or big with freshman Kamari Murphy. Phil Jurick also started 16 games last year, so that’s always an option if necessary. But again, those guys can’t get injured too.

Olukemi is recovering from a torn ACL and Jurick had an achilles tear last year. If those guys aren’t healthy, there’s no depth in the frontcourt. However, if one of the aforementioned three guys steps up, the Cowboys should be fine.

Smart, Brown and Nash form one of the better perimeter trios in the conference — especially if Nash takes the next step in his maturity and development. Ford doesn’t need 15 and seven from the power forward position, but he will need his frontcourt guys to stay healthy and produce in one way or another.

3. You and Luke Winn had an interesting Twitter exchange recently about modern teams that say they like to play fast but don’t actually do it. OSU is definitely one of these teams. Why is there a disconnect from what coaches say they want and what actually happens?

Obviously, 90 percent of high-major recruits want to play up-tempo basketball where they can run and score as much as possible. Moreover, most fan bases want to see an exciting brand of basketball on the floor. As a result, coaches try to convince people that they’re going to be an up-tempo team — and they say it so much, they are convincing themselves at the same time.

Of course, when practice starts and they look at their personnel and what system suits them best, it’s often not an up-tempo group. Running up-and-down for 40 minutes a game means you need a deep bench — and not every team can go 10 or 11 deep on the roster.

Slowing the pace of the game down usually means fewer variables out of the coach’s control, and it also could mean fewer injuries. In the end, coaches want to tell everyone they’re going to play fast — but they simply can’t realistically do it.