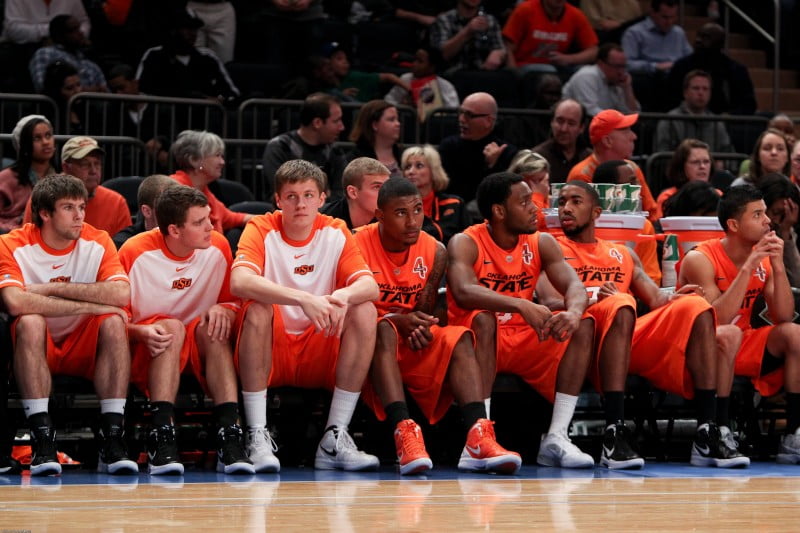 Jeff Eisenberg is a blogger for Yahoo’s excellent The Dagger college basketball blog (what I wish my blog was named). We emailed recently about what OSU fans can expect this season…

1. You wrote recently that Marcus Smart has to score for Oklahoma State to compete for the Big 12 title. If he and Nash are the primary scorers, what role do you see Markel Brown playing?

I see Markel Brown playing mostly on the wing, helping replace Keiton Page’s leadership and providing the same all-around game he did a year ago. He earned notoriety last year for his dunking ability, but he plays solid defense, he gets to the rim and he showed good ability as a playmaker and rebounder. If his outside shot improves, that will only help Oklahoma State.

2. Which Big 12 team is going to be this year’s A&M (picked near the top, finish near the bottom)?

I don’t see anyone with the train wreck potential of Texas A&M last year, but the team I could see failing to live up to preseason expectations is Texas. If Myck Kabongo were to miss time due to the NCAA’s inquiry, that would be devastating for the Longhorns. The only other point guard on the roster is true freshman Javan Felix, which has to be a little scary. Even if Kabongo is cleared to play immediately, I’m still not sure I see a Top 25 team.

Can Sheldon McClellan and Julien Lewis collectively make up for J’Covan Brown’s departure? Is the young front line ready to provide interior scoring and defense? Will Kabongo shoot more efficiently and become more than just a facilitator? That’s a lot of questions for a team picked to finish as high as second in the Big 12 in some publications.

3. I’m a homer, I don’t have very good perspective when it comes to OSU hoops, what is the true national perception of Travis Ford?

I think the perception of Travis Ford is that he may need to make the NCAA tournament this season to keep his job … but he also has the pieces in place to do so. Obviously what has landed Ford in this precarious position is that the Oklahoma State program appeared to be trending in the wrong direction the past couple seasons, culminating in last year’s disappointing 15-18 thud of a season.

I think that trend reverses itself this season. I’d expect Le’Bryan Nash to be more consistent as a sophomore, Marcus Smart to emerge as one of the Big 12’s top guards and complementary players like Brown and J.P. Olukemi (assuming he’s eligible) to contribute. That ought to be good enough for a top-five Big 12 finish and the NCAA tournament bid Ford needs to inspire patience for at least another year.